Musician Jia needs a valuable book of poems by a famous courtesan to buy her freedom…and she believes Luo Cheng has taken it. Her attempt to steal the book from him fails, but the tall and powerful scholar unexpectedly offers to help her quest! But when they finally find the book–and the arousing poems and artwork inside–Jia’s longing for freedom is replaced with a new kind of desire for Cheng….”

This is the first book of yours I’ve read. I think I’ve bought all the others, with the exception of the other Historical Undone novella – something which I will remedy soon, but have managed to totally F up and not read them. Shame on me and I will correct that. 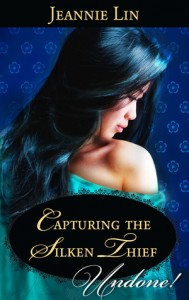 I like the detail here. There’s a lot for me to catch up on and get oriented to since I don’t know this period or place well. But the story makes me want to learn more and it avoided feeling like a total info dump for newbies. The sector of the city, ink stick writing, the musical instruments, the household with a professional peony tender, the scholarly studying with its correct ways of doing things to advance, what the actual exams consist of, how different Cheng’s experience is from a rich man’s son, how he needs a sponsor with influence and money to get him through the doors… It’s amazing just how much thumbnail background detail is provided in the short amount of space.

Despite the fact that Cheng is a scholar and Jia/Rose a musician, they have significant similarities which helps me believe in the future of their relationship. Both are from poor backgrounds and ask only for a chance to rise in the world and be someone. They are hardworking and willing to play by the rules of the system. I like the image he has of her as a tigress in getting what she wants. Jia/Rose is practical – and thus a heroine close to my heart – willing to work hard for years to learn to play the pipa and get ahead in life. She’ll take a night or two from Cheng and savor the memory but is initially planning on that being it and for her to buy her freedom and do as she wants. She does get the book and leave with it, then sells it and only THEN does she go back and experience what Cheng and she can do for each other that night. Cheng is as much a planner as Jia/Rose is – he studied for the exams and when he initially failed, he put in three more years of effort for the chance to retake them. But in the end, it’s Jia/Rose who helps Cheng triumph during the exams. Her example of being fearless in going after what you really want spurs him on. Thus there is more than just hot sex that brings them together and I feel will keep them together.

Two questions though. I never understood where she initially got the pillow book she planned to sell or how Zhang Guo stole it from her. Is Xue Lin a real person/courtesan? If I watched “Flowers of Shanghai” would I understand her better?

Usually these Undone stories feel just that to me – too short, little nuggets that need more space in order to work. I didn’t feel that way about this one. The time to “I love you” is short but you show enough of how similar in temperament and personality these two are that I’m satisfied. B