Computer programmer Joanna Sheraton must rescue an imprisoned wizard to save the universe from destruction.

There was a time when Joanna Sheraton knew nothing of the Void. She was an ordinary computer programmer, toiling in a cubicle in air-conditioned Southern California comfort, unaware that sinister forces had penetrated her universe. But from across the interdimensional divide, an evil mage had put in motion a scheme for eternal life, by transferring himself into a computer that feeds on Earth’s life force. Called upon to help by the wizard Antryg, Joanna could do nothing more than delay. At the end of her first sojourn across the Void, Antryg was imprisoned and their task seemed hopeless.

Now she must depart from Earth once more, to rescue Antryg and save humanity. She is friendless, and the dark mage’s forces hound her every step. But a good hacker is not easily deterred. 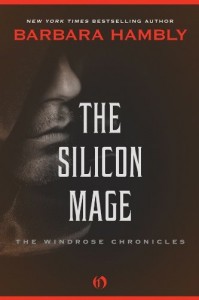 Last autumn I read two of your classic novels. First was “Bride of the Rat God” which I loved. This was followed by “The Silent Tower” which I didn’t adore quite as much but which ended with a cliffhanger which made me glad that the next two books in the series were already written so that I wouldn’t have to wait – hate waiting! – in order to find out what happens next. I had some other books I’d already committed to read and thus it’s taken me until now to dive into “The Silicon Mage” to discover how Joanna plans to save Antryg from the certain torture he’ll endure at the hands of the Council. Oh, and she also needs his help to save her world and his.

The opening line is a great one but I won’t quote it so that people who haven’t read “The Silent Tower” won’t have things spoiled too much for them. Because I strongly advise newbies to the series to start at the beginning since this book takes up right where that one left off, jumps straight into the action and doesn’t cut much slack for people who either don’t know what happened in that book or who don’t remember the finer details. You do provide some background stuff but no great heaping info dumps.

Joanne’s initial quest is to save Antryg from the place where she’s pretty sure he will have been imprisoned – that is if he’s still alive after a six week delay she was forced to endure as she made her plans, downloaded the information she thought would help them save the world and stuffed a nifty backpack with all kinds of doodads which eventually come in handy along the way. Joanne is, I think, like a lot of us in that she’s not especially brave, isn’t a kickass badass heroine ready to take names and karate chop booty. She really is a mild mannered computer programmer who has to nerve herself up, and quiet that little inner voice telling her to just go home and forget all this, to do what she knows has to be done. A lot of people will no doubt identify with that. But she’s also got an inner core of decency which helps her to stifle that inner voice and jump into the formless, and may I say intensely scary sounding, Void knowing that if anything goes wrong, she may never emerge from it or be stuck on the other side, alone and friendless, for life. That takes guts.

Her arrival shows her that things really are as bad as she was afraid they’d be. People she thought she might be able to rely on turn out to either not believe her or are eliminated. The new friend she makes is a touch convenient yet Pella turns into a fascinating character who, along with Joanna, grows in strength and character across the course of the book. Another return person from book one, Caris, is initially suspicious of Joanna with good reason. It takes some concrete evidence to sway him but given his profession and training, it’s the only way his change of belief makes sense. I had to laugh at how the rescue takes place and yet, as with Caris’s change of heart, what occurs is perfectly logical given Antryg’s brilliance and knowledge gleaned from previous years of imprisonment.

And thus begins, or rather should I say continues, the cat and mouse hunt as Antryg, Joanna and Caris once again become the intrepid band on the run trying to thwart the evil mage. One thing that ends up annoying me is the almost constant Weather Channel reports on how cold it is, how wet it is, how miserable our protagonists are, etcetera, etcetera, etcetera. I didn’t need to keep being hit over the head with this as the weather doesn’t seem to change and I already understand how gawdawful the conditions are. There is also a deviation subplot-lette which made me wonder why on earth it was there. It’s gross, it’s nasty, and at the time it only seemed to show Antyg’s humanity. Later on it becomes clear why you included it but at the time, it had me scratching my head.

The final showdown was suspenseful and intense, even if I wasn’t sure what exactly was going on part of the time. It does make sense and again I love that Joanna and her programming skills help save the day. Then comes the afterward and the reason for the earlier inclusion of that seemingly pointless episode which in fact turns into a deus ex machina. Generally I hate deus ex machinas but I’m still pondering whether or not I’ll make an exception here since you have the main characters clearly call it what it is. As the book progressed, I also wondered how much more Antryg was going to be beat up before The End. The man needs his own hospital ward.

I found “The Silicon Mage” to be a good follow up to “The Silent Tower” yet I’m glad it doesn’t wind up with another suspenseful “Who Shot J.R.?” ending. I feel I can take a bit more of a breather before starting “The Dog Wizzard.” Hopefully in that book I’ll discover how Antryg is keeping himself busy and if he likes tacos. B