But Xie is determined to recover his property, and love may not be enough to protect Huiann from his vengeance.”

I’m always on the lookout for something slightly different. Different settings. Different eras. Different occupations for the characters. Something to offset the feeling of “I’ve read this so many times before.” “Captive Bride” fits the bill nicely. 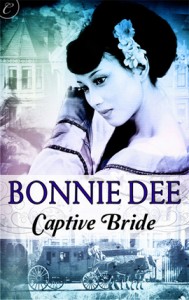 In Huiann you’ve created a heroine who is strong, mentally and emotionally. She may be little but she’s not going down without a fight and proves it. She doesn’t cry or carry on while at Xie’s establishment. Instead she plots and waits and when the moment arrives, she decisively seizes it and escapes. She’s not quite the self saving heroine as she does need Alan’s willingness to lie to her pursuers once she ends up in his store but she’s the one who recognized the opportunity.

Alan Sommers is an emotionally wounded man who falls in love with Huiann at first sight and charges to her rescue, so to speak, like a knight errant he always wanted to be. He’s a decent, honorable man as Huiann sees from his treatment of her, the elderly neighbor and poor abused Dora. You give enough detail about his time spent in a Confederate POW camp to give depth to his character without troweling on the “oh, woe is me pathos.” I also like that Allan isn’t always perfect. He has his moments when he lies about his relationship with Huiann to protect his potential political future.

These two communicate fairly well with pictures but I like that you make it take some time and effort before either begins to learn the other’s language. The conversations they have are charming and provide an intimate view of their thoughts and feelings. With no chance of the other understanding spoken words, they can be honest and talk out some things that help them even if the other party doesn’t understand. Allan finally talks about his experiences in the war – for which he never had found a willing listener before and Huiann discusses her sea voyage and how mad she is that her family – though unknowingly – sold her into this situation. Neither would have opened up had the other spoken their language.

Huiann and Allan feel an instant attraction but don’t act on it. Huiann because of what she’s been though and Allan because, again, he’s an honorable man who would never force a woman. I enjoyed the touching scene when Allan goes and buys Chinese things for Huiann – little things show how much he cares for her. It also provides a nice chance to work in some information about Chinese culture without turning it into a history class.

Madame Teng’s instructions to Huiann allow her to go from zero knowledge of sex, which I would have expected given her higher position in society, to ready to give Allan a wonderful experience without all this “instant, instinctive for a virgin” crap. It also allows her to be attuned to her sexual feelings for him and to be ready to act on them when she feels like it. They think about this sexual relationship and when they move on it, it makes sense and doesn’t feel rushed as by then they trust each other.

Huiann might feel slightly wrong accepting money for her seamstress work but she’s smart and eventually does it. She also longs to be reunited with her family and not wander the earth as a ghost after death but she’s honest about what might happen to her should she return – no control over her life and even possibly a worse situation. She also feels that Xie Fuhua might have a lot of power in China and to return would endanger her family as well. I’m a methodical thinker and so appreciate a heroine who is one too.

During the final confrontation with Xie, Huiann and Allan don’t hesitate. Huiann had already armed herself and when the moment comes, she strikes! And she gets revenge on the other guy too. Go Huiann! The reminder that Xie’s death will set off Tong warfare in the city and Dong Li’s worry about retribution against him for helping Huiann and Alan are nice points to bring up. One thing I do wish there had been more of is time spent in Chinatown.

The future won’t be totally rosy for these two – no happy bunnies and rainbows are going to magically appear. You make it clear there is enough prejudice against the Chinese and against misalliance for that. But these two have had their love and feelings for each other tested enough that I think they’re going into the future with their eyes open and ready to deal with what comes. B

→ Jayne
Previous article: WordPress Plugins at Dear Author
Next Post: Monday Midday Links: Digital is killing print and everyone wants a piece of that pie