JOINT REVIEW: A Marriage of Inconvenience by Susanna Fraser

Janine: This regency-set historical romance begins with the heroine, eighteen year old Lucy Jones, receiving a proposal from her cousin, Sebastian Arrington. Sebastian is the second son of a baron and a cavalry lieutenant and Lucy is a poor relation who has loved him from afar from years, so the prospect of marrying him is a dream come true for her.

Nonetheless, she is troubled by the proposal since she knows Sebastian doesn't return her romantic feelings. She still accepts the offer, both because of her feelings for Sebastian and because being his wife will enable her to secure her younger brothers' future. 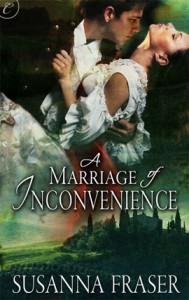 Sebastian's younger sister Portia, a cold young woman who has never liked Lucy, is betrothed to a Marquess, and the family travels to the Marquess's home in the Cotswolds for the marriage ceremony. Meanwhile, because of Portia's competitiveness with Lucy, Portia and Sebastian's mother has asked Sebastian and Lucy to keep their betrothal a secret until after Portia is married.

One morning Lucy takes a walk intending to draw a view. She comes on a neighboring great house and decides to sketch it just as two riders arrive. Her cloak billows in the wind, causing a horse to rear back and throw off its rider, who happens to be James, Viscount Selsey.

James and Lucy talk and Lucy is surprised at how comfortable she feels with Lord Selsey, despite his high rank. They run into each other again over the next few days, both outdoors and during the nightly neighborhood entertainments.

One night James overhears Portia refer to her cousin as "Lousy Lucy from the workhouse." When he attempts to comfort a distraught Lucy, James learns the full story: Lucy's mother, a squire's daughter, ran off with a clerk and the family lived in squalor until her parents and several siblings died of typhus when Lucy was nine. Lucy and her two remaining brothers ended up in a workhouse, and it wasn't until she wrote to her estranged aunt that they were taken to Essex by the Arringtons, who looked on them as charity cases.

Instead of recoiling, James only respects Lucy more after hearing the story, and Lucy is warmed by James' admiration. Still, neither James nor Lucy intends to act on the attraction, Lucy because she is loyal to Sebastian, James because Lucy isn't well-born enough to marry, yet too much of a lady to dally with.

Meanwhile, James's sister Anna is introduced to Sebastian, and she is instantly smitten with him. Sebastian too is hugely attracted to Anna – and to her tremendous marriage portion as well. But he's not sure if she would marry him, and he has a reason for needing to marry soon. Thus the stage is set for something to go awry for whichever of the women marries Sebastian.

While I am not sorry I read this book, I found the first half of the book a lot less absorbing than the second half. More on that in a bit, but first, a few observations about the characters.

James and Lucy were both appealing characters with good qualities like integrity, honor, and a sense of responsibility in common, so I could believe that they would transcend the differences in their class and background. Let me add here that the attention to class and in both their cases (James, though a viscount, was considered an upstart since his title only dated back one other generation) helped add dimension to their characters as well.

One thing that troubled me a bit was the gap in their experience. They were both quite young, Lucy eighteen and James twenty-four, and both very mature for their ages. But Lucy's youth showed in her extreme naivete when it came to anything sexual and in her uncertainty over how to deal with her situation with Sebastian.

On the one hand, this helped make her a believable eighteen year old. But on the other hand, there were no such youthful characteristics to James, and I felt that he seemed as at least five years older than his twenty four years. Consequently, I also felt like I was reading a novel where the age difference between the characters was greater than it actually was, and as a result of that, there were times I felt a little uncomfortable.

Sunita: I agree with your take on the characters. Lucy seemed very sweet, but very young and unworldly. I don’t mind age gaps so I didn’t find them incompatible in that way, but I did wonder what James saw in her. The tone and approach of the book worked against them falling in lust, and they didn’t seem to have enough in common to develop a strong rapport in the short time they spent together. If anything, James seemed to feel pity and compassion for her, which for me doesn’t translate into love easily.

Janine: I felt James also admired Lucy for the strength that got her through the worst parts of her childhood.

Another issue was that the first half of A Marriage of Inconvenience did not engage my interest as much as I wanted it to. The writing style had a nice clarity to it and the main characters were likable, but for the first half of the book, they seemed too perfect to me, almost entirely without personality flaws.

A lot was said about James's vanity and managing ways but I felt that I was being told about them, rather than shown them. Since the only thing he tried to manage in the first half was his sister Anna's attraction to Sebastian, which I sensed was as disastrous as he thought it would be, his attempts to troubleshoot that situation seemed like a very minor flaw in his character.

Sunita: Yes! I kept waiting for him to be arrogant, or heavy-handed, or egotistical, but he didn’t really show any of those characteristics. He was just a nice, serious, head of family with a keen sense of his responsibilities.

Janine: Agreed. Other problems for me in the first half were the pacing and my expectations. Since the book is called A Marriage of Inconvenience, I kept waiting for the conflict implied in the title to appear – for the characters to feel inconvenienced by their duty to marry.

Honestly, I think this title is something of a misnomer, because although Lucy and James are forced to marry, the need for that doesn't arise until the halfway mark, and by then they already have feelings for each other that they just don't fully recognize yet.

In the first half of the book, the conflict is instead a subtle one which revolves around Sebastian's presence in their lives. We readers know Lucy is engaged to Sebastian, but James isn't aware of the betrothal. For me, that fact didn't create enough tension and suspense, since it was clear that Sebastian wasn't attracted to Lucy and that his interest in Anna was much greater.

I felt that Lucy and Sebastian's secret betrothal didn't present enough of an obstacle, either internal or external, to James and Lucy's happiness, and therefore I was somewhat bored during the first half of the book. The nice chemistry between James and Lucy and the impending disaster for Anna did keep me reading, but I kept being tempted to skim.

Sunita: I think I liked the first half more than you did, but I wasn’t sure where it was going. Having read The Sergeant’s Lady, I had an idea, of course.

The writing and the setting evoke an older style of Regency trad; the small house party, the relatively leisurely pace where not too much is going on. I did wonder when it would pick up in intensity, but I rather enjoyed the atmosphere Ms. Fraser created.

My one niggle was the way the Dunmalcolms were depicted. I suppose it’s possible for Highland Scots who were descended from Stuart Kings to have retained their lands and wealth after Culloden, but it doesn’t seem likely (especially since one of the heirs to the Earldom died in that battle). Similarly, it is possible for a Scottish Earl to show up in full Highland dress at a dinner party in the country, but I did wonder about it. Given the high quality of Fraser’s research in the previous book, I was willing to give her the benefit of the doubt, but I did find myself asking questions and looking stuff up.

Janine: For me the second half of the story was far more engaging. Without giving away too many spoilers, it was here that Lucy and James's relationship hit some substantial obstacles, ones that revealed flaws in their characters. James and Lucy stopped seeming so saintly to me and became real human beings – still likable, but capable of making mistakes and suffering their consequences. They also grew as a result of those experiences.

Sunita: I liked the second half quite a bit as well, and readers of the previous book will really appreciate the development of Anna’s character here.

I thought the developing relationship between Lucy and James, especially their physical relationship, was really well done. Their deepening intimacy is integral to their growing knowledge of and love for each other. Indeed, these scenes made James’s anger at Lucy and their subsequent estrangement somewhat less believable to me. I’m growing impatient with the Small Misunderstanding that separates newly joined lovers and adds one more bump in the road to the HEA. I would have preferred an obstacle which put Lucy and James on different sides of an issue without pushing them apart through anger that the reader knows will have to be overcome relatively quickly.

Janine: I actually saw the final conflict as more than a small bump in James and Lucy's road. The consequences of Lucy's choices were such that I found that situation entirely believable.

A Marriage of Inconvenience is one of those tough to grade books. I would give the first half no more than a C, but the second half at least a B, so my overall grade for it ends up being a C+/B-.

Sunita: I’ll give it a B-. It’s not as intense a story as The Sergeant’s Lady and the characters aren’t quite as compelling, but it’s a worthwhile read.