I’ve been looking forward to ‘Con & Conjure’ the next installment of your Raine Benares series since shortly after finishing your last book, ‘Bewitched & Betrayed’ and I’m glad to say I wasn’t disappointed. 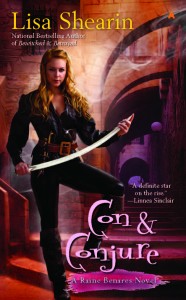 Our heroine Raine Benares, still linked to the soul eating Saghred which gives her access to almost unlimited power, starts her adventures in this story off by foiling an assassination attempt.   Turns out the attempt is made by Raine's ex-fiance Rache Kai, a new character to the series, who's one of the worlds top assassins.   Raine must use her seeker abilities to try and track Rache down and stop him from completing the task for which he's been hired.

General pandemonium and mayhem ensue, much like earlier books in the series.   In fact this one has a bit of a been there done that feel in places.   The cycle of events is quite familiar leaving things feeling a bit stale at times.   The series regular humor and non-stop action are present, but things take a bit of a darker twist as Raine struggles to balance her desire for saving people with using the Saghred and risking it taking her over or turning her mad.

In addition to Raine's ex we meet another new character her cousin Mago, Phaelan's older brother.   Mago's a banker with the soul of a con man.   He has arrived on the Isle of Mid to help Raine deal with some of the enemies she's acquired by separating them from the funds that let them operate.   I thought Mago was a fun character and wish we would have seen a bit more of his inner con man "in action'.

Many of the series regular characters are present although they aren't as prevalent as in the earlier books.   I'm glad we saw more of Imala as I find her to be a fun character and it's always good to see more of the ever loyal Vegard as he attempts to keep up with Raine while watching her back.

The last part of the book sets up things for what I’ve read will be the final book in the series, "All Spell Breaks Loose', which should be interesting as we'll be leaving our regular setting of Mid and Raine will be dealing with some limitations that have arisen.   I'm looking forward to the next one and at the same time it seems like a good time to bring the series to a close, it's just too bad that it will be a year before we see it as the end of this one left me ready to jump in and keep reading.

"Con & Conjure' is a great addition to a wonderful series and I'm looking forward to "All Spell Breaks Loose' and whatever else you write with high anticipation. B/B-

~P.S. Newcomers to this series will want to start with the first book "Magic Lost, Trouble Found'.