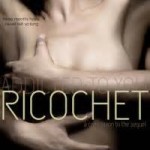 I recently read and reviewed Addicted to You and mentioned at the end of the review that I’d downloaded the sequel immediately after finishing that book. This wasn’t a reflection of how much I liked Addicted to You but rather in the mistaken belief that Ricochet was a novella that wrapped up the story of Lily and Lo; I was interested in them enough to want to see how their relationship turned out. When I found out that the series actually continues on for at least two more books after Ricochet, I had a bit of buyer’s remorse. Or perhaps reader’s remorse; at 99 cents I didn’t regret buying the book so much, I just wasn’t sure that I actually wanted to read it.

The following is somewhat spoilery in regards to Addicted to You; proceed with caution, dear reader:

Ricochet opens shortly after Loren has entered rehab for alcoholism; he had originally tried to deal with his addiction on an outpatient basis, but a slip involving tequila and a huge fight with his father (in which stunning revelations about his parentage were revealed) convinced him that he needed to actually go to a treatment center. This leaves Lily alone, without her best friend and lover and battling her own serious demons: she’s a sex addict. Fortunately, she’s not actually entirely alone; her older sister Rose discovered her secret in Addicted to You, and Rose and her on again/off again boyfriend Connor are helping Lily as much as they can. Rose has moved herself and Lily into a house near Princeton (where Rose attends school). Oh, the perks of being ridiculously wealthy: not only are they able to pick up and move into a beautiful house together easily, but Lily is able to transfer to Princeton in spite of the fact that her grades and attendance at Penn were both pretty poor.

We learn a little more about Lily’s dynamic with her parents in Ricochet: her father is benevolent but somewhat distant and ineffective, very much married to his job; her mother is a controlling witch. Understanding these relationships did give some insight into Lily’s issues, though I wish her mother’s portrayal had been a bit less one-note.

A villain crops up in Ricochet, one whom I assume will continue to dog Lily and Lo and threaten their happiness in future books. An ex-schoolmate and tormentor of Loren’s, Aaron Wells also comes off as a bit too much of the cartoonish bad guy to take seriously. His one interaction with Lily in this book, when he is her date for a family function (a date her mother arranged without Lily’s knowledge or consent, as seems to be par for the course), is painful to read. Aaron practically twirls his mustache and ties Lily to some railroad tracks, and Lily is, as always, completely incapable of dealing with anything on her own; another character has to step in and rescue her. Lily’s wimpiness and anxiety are theoretically sympathetic features in her character, but in actuality I just found them irritating.

As with the previous book, there’s a relative lack of action in the first half of Ricochet. It wasn’t boring to me, but the pacing felt odd. Lily is in a holding pattern waiting for Loren to contact her; he’s not allowed to do so for the first month of rehab, and she spends a lot of time in a state of anxiety, buffeted by her own addiction and fearing that when he gets better, he won’t want her. The latter issue resonated for me as realistic, but after hearing about it for the 15th time, I had had enough.

Unfortunately, Ricochet was marred by some of the same of the same copy-editing issues that Addicted to You had. Once again: the muscles of a man’s stomach are “taut” not “taught” – please stop using a word over and over if you don’t know how it’s spelled. Also, a point is “moot,” not “mute.” There were also just many odd little word choices and observations, like Lily meeting someone and thinking to herself that the person’s complexion probably meant that they were “half-Italian.” That seems…awfully specific. After a while, the awkwardness of the writing became distracting.

I’m troubled by the way some of Lily’s issues are handled in the book; she has anxiety so severe that she scratches welts into her arms during a therapy session, but her doctor doesn’t believe she needs medication. I didn’t really understand this, especially because I didn’t see evidence that the doctor is giving Lily strategies for coping with the anxiety. Instead, she urges her to “stay strong,” which didn’t seem very helpful to me. She also advocates strongly for Lily staying in the relationship with Loren and trying to foster intimacy rather than considering being on her own for a while. I was uncomfortable with that because the therapist 1) doesn’t know Loren, and first suggests this approach during the first therapy session, when she can’t even know that much about the relationship and 2) does know that Loren is an alcoholic. I’m not saying a competent therapist would urge Lily to break up with Lo – I would not expect that much judgment or interference – but I don’t think she’d straightaway wholeheartedly support an unhealthy, co-dependent relationship between two addicts.

I feel a level of frustration with Lily at this point in my reading because by the end of the second book, even though her compulsive sexual behavior is somewhat leashed, she is still a mess emotionally and psychologically. Even in the glimpse of the opening of the third book, shown at the end of the second book and taking place immediately after the second book ends, Lily is blaming herself for her issues: “my stupid anxiety and bad habit has ruined the perfect outcome I imagined.” Argh. I get that Lily still has issues (there are two more books, after all), but what it comes down to is that I haven’t seen very much progress in her in the course of two books (especially not in the issues underlying her compulsive sexual behavior), and I just don’t like her or care about her enough to put up with her endless neuroses. She’s so miserable, so much of the time.

There was a larger issue that came up in the latter half of Ricochet that also disturbed me: both the therapist and Lo, in several different ways, suggest that the way to control Lily’s sex addiction is to give Lo control over Lily’s sexuality. Once Lily realizes that she can’t masturbate anymore at all because she will do it for hours, over and over with no ability to stop (which: ick), Lo comes up with the solution that she can orgasm only when they have phone (or rather Skype) sex, and then only once, and only when he tells her to.

This reminded me that Lily often describes her sexual encounters with other men as being ones where she’s in control, and the depiction of her sexual relationship with Lo is the opposite – he calls the shots (that was true to some degree even in the first book). While this makes some sense – it dovetails with the idea that only with Loren can Lily be truly intimate – it starts to feel like there is a subtle D/s relationship between the two of them which is being put forth as the solution to her problems.

That was problematic for me because it gave me the slightly icky feeling (one I hadn’t had with either book before, to be fair) that the sex addiction was being subtly exploited to make it kind of perversely “sexy.” That may be unfair of me; I may be overly influenced by the whole “50 Shades” phenomenon, but it definitely crossed my mind.

Also, the therapist gives Lily a sealed envelope listing verboten sexual activities, and advises Lily not to read the list. It will only make her want to do the things on the list, being told that she can’t. Instead, the therapist says that Lo (whom, again, she’s never met, but who she knows is an alcoholic in recovery) should be given the list and be in charge of Lily’s sexual do’s and don’ts. What the fuck ever? How is taking away all of Lily’s agency a healthy step on her road to recovery? (Also, I can’t help but wonder what is on the list. No anal? Missionary style only? No furry role-play? Enquiring minds, etc.)

I find it hard to believe that a therapist would prescribe such treatment. Again, she doesn’t know Lo; what she knows of him mostly isn’t good (he’s an alcoholic who has enabled Lily’s addiction in the past). At the very least, I would think she’d have the integrity to be concerned about the pressure it might put on Lo to be in charge of Lily’s sexual behavior. He, after all, is in a fragile place too. But one kind of weird aspect of these books is how separate, in a way, Lily and Lo’s addictions are kept, even though they have been intertwined for years. The book, and Lo, are either dealing with Lily’s addictions, which means putting dealing with HIS addictions on hold, or vice versa. I began to wonder if that was because the only real solution for them otherwise would be to separate. Which I honestly didn’t see as a bad idea. I don’t think that separating from an enabling partner is always the solution, but if it were me, with my non-existent psychology degree framed and hanging on my wall, I think I’d tell these two: try living apart with minimal contact for a year; see how you are, what kind of person you are, without this person whom you’re so INCREDIBLY dependent on.

Again, I may not know what I’m talking about, here; I have no training in dealing with sex addiction (this is not a sentence I ever imagined I’d write). But when I read a line like this, spoken by Lo to Lily:

“I love you,” he says again, “and no other man will ever say those words and mean them the way I do.”

….I’m like, danger, danger, Will Robinson. There is a LOT wrong with that statement.

I’ve written a lot of words (this is a long review for me) about what I don’t like about this book. Maybe the best I can say about it is, at least it engendered a reaction in me; it’s not another tepid, boilerplate romance (far from it). In a perverse way, it held my interest. And for all my complaints, I’m still tempted to pick up book number three. My grade for Ricochet is a straight C.