REVIEW: Addicted to You by Becca Ritchie and Krista Ritchie 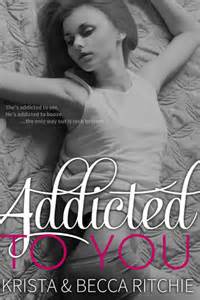 I picked this book up because the heroine had an extremely unusual issue: sex addiction. You don’t see that every day, and I was curious as to how it would be handled, especially in a New Adult novel. I’m not actually sure I believe in sex addiction as a real thing (medical professionals still seem to be divided on the issue, with some seeing it as a subset of obsessive-compulsive disorder). I certainly believe that there are people who use sex as a crutch and in an unhealthy way. To encounter the problem in a heroine rather than a hero (where it’s often unacknowledged as a problem and instead treated as tacit evidence of his masculinity) was intriguing.

The book opens with Lily Calloway waking up in a frat house after a one-night stand. She tries to sneak out but is humiliatingly caught by some frat brothers; she’s eventually rescued by Loren Hale and a chauffeured ride back to their apartment. Lily and Loren are best friends of a sort; perhaps co-conspirators would be a better term. They grew up together and have been in a fake relationship for the past several years, a relationship meant to cover up their respective addictions: hers to sex and his to alcohol.

The first half of the story is pretty simple and even a bit repetitive. Lily trolls for sex, Loren gets drunk, Loren gets flirtatious with Lily and she wonders if he wants their fake relationship to become real (they slept together once long ago). We do learn a little about Lily’s family, but other than that, not a lot happens until almost the halfway mark. I didn’t mind the lack of action that much, but that may be because I was focused on other issues I had with the book.

Lily and Loren are both rich kids (like, really, really rich) who attend the University of Pennsylvania in Philadelphia. Neither of them have friends or attachments other than to each other (and Lily to her family, though she avoids them as much as possible). Whether this isolation is a by-product of their addictions or both are symptoms of a larger problem wasn’t clear to me.

I spent a lot of the book confused as to why Lily was the way she was; I wasn’t sure if there would ever be an explanation. Was it based on trauma or sexual abuse or family issues? Her family seemed nice enough. Was it just an inherent illness? The explanation itself wasn’t so important to me – when it comes it’s sufficient – but her behavior is so beyond the bounds of normal that I felt there was some suspense as to the reason for it that the authors really didn’t intend for there to be. In other words, I wish it had been spelled out earlier so I could get over wondering what the hell was wrong with her.

Loren was a little easier to understand – he has an abusive father and absent mother, and alcohol addiction is more familiar and….normal, in my view, I guess? (Though Loren takes it to new and not always believable heights.) There are indications late in the book that his father is a heavy drinker as well, so I pretty much got Loren’s addiction.

I found Addicted to You rather depressing, because I found Lily and Loren and the nature of their addictions depressing. Alcoholism is something I have some familiarity with, and though it’s not a subject I avoid necessarily, seeing someone so young so deep in addiction was unpleasant. As for the sex addiction…I’ve always found sexual compulsion to be, not to put too fine a point on it, yucky. I have limited tolerance for obsessive behavior in general, and there is something about obsessive sexual behavior that honestly grosses me out. I’m not sure if that response arises from prudishness or something else. It wasn’t like I was morally judging Lily, but if I’m honest there were times when she disgusted me.

(You may be wondering why I picked up the book in the first place, given my aversion, and that’s a good question. I’m not sure – I guess maybe I was expecting a slightly less harsh and seedy depiction. Which is totally on me; I don’t fault the authors for making grim addictions seem grim.)

However, I wasn’t confident that the depiction of either addiction was very accurate. Again, I know a bit more about alcoholism, and what struck me was that Loren was described at least once (maybe a couple of times) as a “functional alcoholic.” He somehow manages to hide his drinking from the people around them – mostly his father and Lily’s family. But he doesn’t really maintain relationships (other than with Lily), doesn’t work or have a social life, and it turns out he’s not doing as well in school as he leads Lily to believe. Actually, neither of them are doing that well, which made me wonder how they’ve made to their junior years, since there’s no indication that their patterns of behavior – missing class, blowing off  studying to feed their addictions –  is any different than it always was.

I think of “functional alcoholic” as one who compartmentalizes their drinking to some degree – for instance, goes to work five days a week and then spends the entire weekend blotto. The thing about Loren is that he is ALWAYS drinking. From the time he wakes up in the morning to the time he passes out at night, he is drunk. If he has coffee, there is liqueur in it. If he’s drinking juice, there is vodka in it. I have no experience with the type of alcoholic who is drunk 24/7 and find it hard to believe that if such alcoholics exist (I guess they might) that they are remotely “functional.” People are going to KNOW – you’re not going to be able to cover up the smell of alcohol emanating from you with showers, cologne and mints, as Loren supposedly does. That’s just not credible to me.

Further, the potency of Loren’s addiction seems to fit better with someone a lot older and honestly someone who is probably not going to last much longer. Anyone with an addiction that must be fed AT ALL TIMES is pretty much at the end of their rope, basically a mess, in danger of dying at any moment (in Loren’s case, I would think, from alcohol poisoning or asphyxiation from vomiting while comatose), and incapable of keeping their addiction a secret. I would have found the story more believable if Loren’s drinking was toned down quite a bit.

Similarly, Lily is addicted to sex to the point where she does very rash things, including obsessive viewing of porn, sex in public restrooms, and sex with strangers. In fact, Lily’s sex is pretty much *all* with strangers, since she’s a one-time-only kind of gal. Which didn’t quite make sense to me – if sex was her goal, why write off a guy after one time? It seems like she’s ashamed and embarrassed and can’t face the men afterward. Honestly, her attitudes towards sex and her addiction were confusing to me, and I wasn’t sure how much of it to attribute to her being a first person narrator and therefore somewhat unreliable. At one point she says that she “loves sex”, but that’s not how it seems. It seems more like an obsessive need that once sated leaves shame and self-disgust in its wake (I seriously got sick of her wailing, “what is wrong with me?!” after an episode of ill-advised screwing). Her behavior did seem to fit in with the OCD model of sex addiction, though.

It’s strange to say about a book that focuses so much on an ostensibly romantic relationship, but Addicted to You is not remotely romantic. Loren and Lily’s relationship is the epitome, the absolute dictionary definition, of “co-dependent.” Each selfishly enables the other’s unhealthy urges in order to protect their own from discovery and censure. They are using each other so hardcore that it’s hard to see the love that supposedly exists between them. They are aware that they enable each other but until a character introduced later in the book steps in to try to stop Loren’s drinking, it doesn’t even seem to occur to them to change. Lily’s perspective (which I felt did ring true) was that it wasn’t possible, for either of them, which I’m guessing is something addicts tell themselves in order to not have to even try.

Ultimately, this was another hard-to-grade book for me. On the one hand, it wasn’t a very pleasant read; the characters weren’t likable and the prose was just adequate. (There were a number of copy-editing errors,including the use of “taught” for “taut” at least three or four times, and some odd/simply wrong word choices. I could attribute this to it being a review copy, but since I downloaded it months after the actual publication date, I’m wondering if the mistakes were in the finished product as well.)

On the other hand, the book got progressively more involving towards the end, in part because of the introduction of a few characters who shook up the dynamic. I finished this book in the middle of the night when I couldn’t sleep (something I almost never do), and immediately downloaded book 1.5, Ricochet. I actually had a bit of buyer’s remorse in the morning, when I did some checking around on the web and realized that Ricochet was not actually the resolution of Lily and Lo’s story, as I had assumed; there are actually at least two more books in the series. I’m really not sure I want to read that much more about these people; I’ll see how I feel after Ricochet.

So, grade? I guess a C+, which is a reflection of the good (interesting premise, compelling ending) averaging out with the bad (depressing storyline, not-great writing, possibly shaky depiction of addiction).

→ Jennie
Previous article: Thursday News: Norway digitizes all of its books, Pocket shares its best stories, Apple shares 12 digital gifts, Big 5 publishers aren’t sharing the love with indies, but will soon have to share some cash with readers
Next Post: REVIEW: All He Wants | All He Needs by C. C. Gibbs