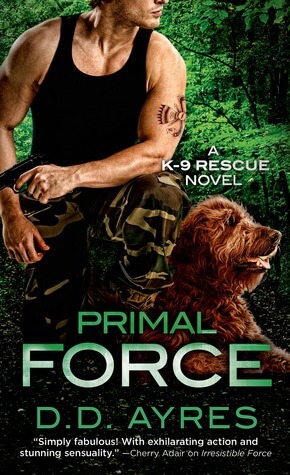 Primal Force is the third book in your K-9 Rescue series. I was able to follow the story without any drama so I’m confident it can be read as a stand alone.

An Author’s Note in the beginning of the book indicates where you have taken some license with existing service dog programs but the text itself makes it clear that you know the subject well.  Warriors Wolf Pack is a service dog program for wounded veterans. Lauray “Law” Batisse is one such veteran,  a half Cajun half Alabama-Coushatta (Native American) former MP who served in Afghanistan.

On his third deployment, Law was severely wounded by an IED. His K-9 partner, Scud, was killed as a result of the same incident. After many attempts and multiple surgeries, Law’s left leg was eventually amputated above the knee. He is now three years post injury but still suffers from PTSD. He is a lone-wolf by nature and has a generally low opinion of his ability to manage any kind of healthy relationship with a woman (related to issues with his father, who was, by all accounts, a bit of a bastard).  Law wants to return to work for the Arkansas State Troopers but has failed his physical twice. He has been offered a desk job but he does not find the idea attractive – he is an outdoors, action-type man.  Of course he is well built, muscular, strong and gorgeous (I’m not complaining). He has recently been fitted with a state of the art prosthetic leg which could well mean the next time he tries to pass the physical he will succeed.  His PTSD is a problem though. He has a heightened startle reflex, nightmares and flashbacks – and he hasn’t exactly told the police department about that.

At the badgering of his half-sister, Yardley Simmons (who I gather has cameo appearances in other books in the series), he goes to WWP for a service dog to help him manage his PTSD. The way the program works is that the dogs choose their alphas. Samantha, a Golden Doodle and former shelter rescue dog, chooses Law immediately. Law is embarrassed. He calls Sam a “Cheese Doodle”. He’s used to working with German Shepherds or  Belgian Malinois, dogs who have a strong guard/protective instinct and who can chase and take down perps. Sam lacks the killer instinct. She is trained to detect PTSD events by changes in Law’s scent and to be a calming influence. She is a helper dog, not a policing dog.  Law is not the only one who is mocking of his new canine companion – his colleagues at the police department aren’t that impressed either. (And, they don’t know that Sam is there to help Law – he’s told them he’s helping WWP train their dogs). I’m happy to say that by the end of the book, all of the doubters and nay-sayers are proven wrong and come to appreciate and praise Sam.  As they should.

Samantha was trained by Jordan “Jori” Garrison. Jori was a college graduate, just about to start a law degree when her fiancé was killed in a car accident. It turned out he was a drug dealer and had, unknown to her, stored drugs and cash in her apartment – she ended up going to jail for nearly 4 years instead of law school. In prison, she was selected for the WWP training program and learned how to train service dogs. She’s now out on parole. She’s keeping her distance from her family, not wanting to bring further shame upon them.

Jori and Law have an instant chemistry and attraction and they decide to act on it an a one-off ‘get it out of their systems’ type way. Only, neither of them are keen to leave it at that. Law, because reasons, pushes her away regardless and this pattern continues as the book progresses.

At the time of his injury,  Law was undertaking an investigation in Afghanistan involving contractors running drugs. He is missing some details and wants to look into it. He finds a link to Tice Industries, a company he had been working to take down (with other law enforcement) prior to his enlistment, for involvement in the drug trade. As it happens, Jori’s former fiancé, was a Tice relation and had worked for the company. Law and Jori team up to try and find them both some answers and finally take down Tice.

I had an early copy of the book.  There were numerous typos, homonym errors and words in the wrong order. It seemed to me my copy was very early indeed. I wouldn’t normally mention them (and my grading discounts them) because ARC, but there were also quite a few contradictions and continuity errors. I can’t be sure how much of what I read will have been corrected in the actual release. However, I can only review what I read. I can discount the typos but the other is impossible for me to disregard.  Law’s reasoning for pushing Jori away was fair enough the first time I suppose (if you buy his “loner emo guy who’s no good for anyone”  persona – for me that only goes so far) but he chops and changes what he thinks he wants from Jori far too regularly. Some of the pushing her away just felt like manufactured tension (or a continuity error).  It felt to me like a book which had been written in sections (I have no idea if this is the case of course) and then put together but the transitions didn’t mesh seamlessly. Each section seemed different to the previous – sometimes in subtle ways and others far more obvious. The sections themselves were mostly good though.

Taking down Tice Industries was the main focus of the suspense subplot but when it came, it was off page and only peripherally related to the protagonists. It was possibly realistic, but nevertheless, anti-climactic. Still, I appreciated the tension you managed to create out of Law’s more personal danger from someone unrelated to the drug trafficking case.

It seemed to me that you had researched PTSD and amputation disability because what I read in Primal Force tracked very well which what I know to be the case (from my real life job and from other reading I’ve done).

There were even some parts of the story from Sam’s POV and I must say I kind of liked them the best. (I have the soft spot for dogs, what can I say?)

When I finished the book, even though it was patchy and inconsistent in places, I was inclined to a B- grade but in writing the review and summing up the plot, I have realised there were numerous storylines left hanging. The hints of romance for Yardley seemed to me to be setting up a future book, which is fine. I don’t refer to that. But, for instance, when Jori meets with her parole officer, he asks her some probing questions (which seemed to me to be bordering on inappropriate, if not actually so) and that never went anywhere. He didn’t even appear in the story again. Jori wants to “clear her name” but that seemed to be left along the way too.  Only some questions about Law’s injury were answered – what exactly was going on with those contractors? Why did Harold Tice care so much about Law’s military records? Did anything happen to Luke? Or to Erin? There were other questions I had too relating to Jori’s and Law’s future from a career perspective, that were left unanswered.

For those reasons, I’ve had to readjust my grade. It was just too disjointed and there were things that didn’t make sense to me.  That said however, I didn’t struggle to finish the book and I liked Jori and Law together. I loved the stuff with the dogs. The writing style was engaging and easy to read and some of the word pictures you painted were great. I’d be happy to read more of your books and I admit to curiosity about Yardley’s mysterious lover.