REVIEW: Lady of the Imperial City by Laura Kitchell 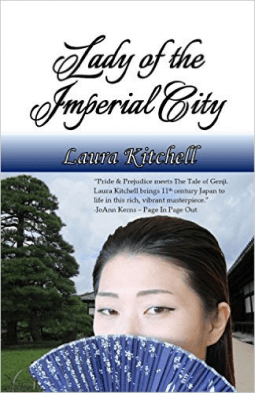 Love isn’t forbidden to Lady Kirei as long as it’s with a proper gentleman of Kyo and she doesn’t mind sharing him with his wife. Her provincial upbringing makes her socially unacceptable as a true wife, yet as a lady by birth and a court favorite, her position makes it impossible for her to seek a match below her station. She’s trapped.

When a nobleman of similar provincial upbringing arrives in town and becomes an instant favorite of the emperor, he is sent to Lady Kirei for tutoring on city ways. Lord Yukan is smitten, but she’s not a conquest to be won. She’s a woman of substance and worth, and she’s off limits.

Despite his unrefined manners, Lord Yukan’s aristocratic bloodline shows through his fine taste and quick mind. It doesn’t hurt that he’s handsome, too. As he begins to touch her heart, Lady Kirei is ever mindful that they can’t commit, especially when her uncle schemes to make her a consort to a prince.

Will her family’s honor relegate her to the shadow-life of a consort, or can love find a way?

Well this was a fortuitous find at netgalley. The cover caught my eye but it had all the hallmarks of a historical fiction book that would end in heartbreak and grief so I almost didn’t dig deeper into it. Even the opening paragraphs of the blurb hint at sorrow. The last sentence though, that’s what got me.

This is very much a character driven book about a time and place almost totally unknown to me. I love it! This is why I adore historical books and stories set in countries different from mine. Happy sigh. Unfortunately I know so little about this setting that I have to just accept that the historical rules are followed. I do plan on some Bing-ing, Google-ing and other Internet-ing to see if I can learn more. I am not a purist who insists on period correct language and damn if I’d know what it would have been here anyway. The modern sounding language used worked just fine and since there weren’t any Japanese equivalents of “mayhap” or “prithee”- we’re all good.

“Pygmalion” in reverse starts out the story. Lady Kirei is the accomplished celebrated one while Y?kan is the country bumpkin whom she’s been tasked to educate. Actually his status is as high and yet as countrified as is hers since both are from good bloodlines and related to the Imperial family but when one has been mainly raised outside of the capital city of Kyo – which for the good people means the only place on earth they think matters – one can only hope to eventually aspire to being grudgingly accepted as semi-civilized. The closest Western equivalent I can come up with is Versailles in the 17th century. Clothes, manners, accomplishments – it all counts or counts against you if you haven’t mastered it.

There is a lot about the traditional dress of the time which if readers want an image to go by I’d suggest going to Bing and typing in “junihitoe.” Layers and layers of exquisite, gorgeous fabrics, carefully chosen for color harmony depending on the Season. Twelve layers, yes, and the women often had trouble even moving under the weight – as mentioned in the story when Kirei’s cousin had to be hauled up from all fours – but wow, they looked good.

The details of daily life – status, hierarchy, marriage prospects, family ties, how not taking concubines and consorts along with a main wife could doom a man politically, incense contests and making sure you didn’t go against the good luck travel edicts of the Yin-Yang Ministry, and that wait! virginity is shameful? – are presented as a fairly effortless quick little history lesson. The social status and marriage stuff might be repeated a few times along the way but since it’s all new to me, the reminders weren’t totally wasted.

Yukan is madly infatuated with Kirei and determined to enter her good graces. And he will do so by ….penmanship and learning the finer points of paper selection for his correspondence. Well, that’s different but given the attention still paid to tea ceremonies it doesn’t surprise me. Kirei has her work cut out for her but quickly discovers that Yukan is her equal in education and can tell her about his travels. Not only is he not affronted that she knows Chinese and can quote famous Chinese poets, he admires her for it. It’s soon apparent these two are made for each other.

But how to thwart her scheming uncle’s plans to shuttle her off as a lower ranked consort instead of the true wife she longs to be? Good thing Yukan is determined to win his heart’s desire, Kirei is determined to escape the avaricious Prince and they’ve got a mutual friend in Court savvy Yoki. Yoki’s got a plan that will get the two lovebirds together while not ruining their families, alienating the Emperor and Empress and ruining Y?kan’s family business. Kirei’s two delightful maids also help things along.

Let me say I was riveted to see how the day would be saved and delighted at how tables were turned and seemingly silly Yoki comes through. There’s humor, history, lovely images painted with words, a darling couple and a whole new world that was opened up to me. Yep, this was a good gamble that paid off. B+