Archangel’s Enigma, the eighth novel in your Guild Hunter series, surprised me. I went into the book with low expectations because I hadn’t connected with its hero, the mystery-shrouded Naasir, in the earlier books he appeared in. 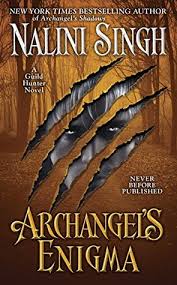 In those earlier books, Naasir’s talk of eating other characters was a big turnoff to me. Whatever else Naasir is, he is, as other characters state in Archangel’s Enigma, a person. For one person to eat another skates very close to cannibalism, even if their paranormal abilities are different ones, and one is an angel while the other part vampire and part something else.

Then again, you have a track record of writing books I enjoy even when their heroes have engaged in behaviors I find abhorrent. So perhaps I should not have been surprised that I enjoyed this novel as much as I did.

Archangel’s Enigma begins when Lijuan unearths a prophecy of her downfall and end at the hands of three beings. Two are unknown to her, but the third, she realizes, must be the sleeping ancient Alexander.

In New York, Archangel Raphael hears of Lijuan’s subsequent search for Alexander and fears that she intends to kill him in his sleep.

Naasir, also in New York, searches for his mate but doesn’t manage to find her before Raphael asks him to go to the Refuge to meet up with the scholar and angel Andromeda, who has agreed to accompany him on a search for Alexander. Andromeda has studied the sleeping ancients and might therefore have insight into the best places to search.

Andromeda is the granddaughter of the Archangel Charisemnon. Due to her parents’ lack of boundaries, Andromeda was exposed to a lot of sexual situations as a child, though luckily (and perhaps improbably, given the nature of Charisemnon’s court) she wasn’t molested.

As a young angel, Andromeda ran away to the Refuge and asked to be trained as a historian. She was asked if she had other obligations and because she wanted so badly to study, she lied and said she had none, though in fact her parents made a blood vow to her grandfather that someday Andromeda would begin five centuries of service in his court.

Soon after arriving at the Refuge Andromeda took a vow of celibacy. To make sure the vow stuck, she swore to stay celibate as long as the Star Grimoire, a one-of-a-kind document missing for a thousand years, remained lost.

Now Andromeda’s four hundredth birthday is approaching and her days at the Refuge are numbered. She’s been commanded to present herself in Charisemnon’s court when she turns four hundred. If she doesn’t appear she’ll be bounty hunted and killed; other archangels won’t offer her mercy. And when she serves in Charisemnon’s court, she’ll be expected to participate in torturing others.

The day she meets Naasir, Andromeda receives a letter from her grandfather’s court. She is angry and scared, but she hasn’t told anyone of her secret commitment to serve Charisemnon.

Upon meeting Andromeda Naasir suspects she is his mate but then she snaps at him to be civilized for a minute. Naasir is so offended  that he chooses to be nothing but icily polite from that point on. The tension finally breaks when Andromeda challenges Naasir to spar with her later that night.

Naasir tells Andromeda he wants to rut with her (that’s the word he likes to use; I’m not in love with it myself) and Andromeda informs him of her vow. She explains she chose the Star Grimoire because it was impossible to locate, but Naasir promises her he’ll find the book.

The next morning Andromeda is kidnapped by Xi, Lijuan’s general. She is spirited to Lijuan’s citadel, and Naasir races after her but can’t get there as quickly as the angels who took her. Jason intercepts Naasir to ensure he refrains from giving in to the urge to kill her kidnappers, and urges Naasir to sneak Andromeda out instead.

While at the citadel, Andromeda does her best to stall Lijuan’s demands for Alexander’s location. When Naasir arrives to save her, their escape plan is complicated by the presence of another prisoner, Lijuan’s injured sister, Suyin, whom Andromeda has befriended and wants to free.

Eventually they escape, and Andromeda and Naasir begin to seek Alexander. But will they reach the sleeping ancient in time? And can Andromeda’s unwilling commitment to Charisemnon be undone?

Archangel’s Enigma is part rescue story, part road adventure, and part romance — and a lot of fun throughout.

My concerns about Naasir were only partially allayed and to explain how would involve revealing major spoilers. A partial explanation follows:

Suffice to say that Naasir was very young, in a great deal of pain, confused, and under other mitigating circumstances the only time we know for a fact that he ate someone.

That person had done Naasir great harm, and no other instances of eating people are confirmed, although Naasir’s thoughts refer another occasion on which he “had gone a little insane in vengeance.”

No explanation is given as to what that means, though, so it is possible that Naasir is more talk than action when it comes to eating others, and he doesn’t even talk about it very much in this book.

All of this being the case, I enjoyed Naasir more than I expected, though I liked Andromeda even better. But the best thing about the book may have been the chemistry between the two — they just really click as a couple, make a good team, and have a playful way of relating to each other.

Part my feeling that Naasir and Andromeda make a good couple was due to Archangel’s Enigma having a lot of courtship — much more than the previous book in the series, Archangel’s Shadows.

Another aspect that makes this couple shine is the theme of acceptance which is woven into the romance. Naasir wants someone who will love him for who he is, not try to change him, and he finds that person in Andromeda. Because of that, I could really believe in their relationship.

There are also some big developments with Illium (I even wondered whether I was imagining an attraction between him and Aodhan). There’s some news on the Raphael front, too, as well as hints that Alexander, a good and honorable angel back in his day, had some connection to Caliane.

I have a few nitpicks. First, I find the Legion fascinating and I’m starting to get impatient with how little we know about them. I hope we find out a lot more in the next book because this one didn’t advance that story thread much.

My second nitpick is that early on in the book, Andromeda thought about how in four hundred years of life, she’d never been tempted to break her vow of celibacy. That was a bit of an eye roller. Naasir may be the first guy she’s fallen hard for, but when a character is a four hundred year old virgin, it’s a stretch to believe that she’s never even been presented with temptation.

Lastly, I felt the final sex scene was superfluous. Sex scenes are almost always more interesting before all the plot and character conflicts are resolved, when there is more at stake. In this case, the last sex scene (unlike the earlier one) came after that point and consequently felt shoehorned into the story. I felt that it didn’t add much.

Other than that, I liked the book a great deal, especially the road romance and adventure aspect of it. This novel among my favorites in the series, the others being Angels’ Blood, Archangel’s Blade, and Archangel’s Legion. Archangel’s Enigma gets a B/B+.