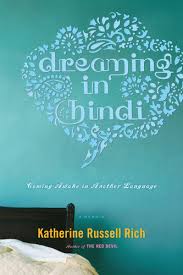 When Sunita was on daily deals duty during Jane’s vacation, she came up with this interesting looking book.

After miraculously surviving a serious illness, Katherine Rich found herself at an impasse in her career as a magazine editor. She spontaneously accepted a freelance writing assignment to go to India, where she found herself thunderstruck by the place and the language, and before she knew it she was on her way to Udaipur, a city in the northwestern state of Rajasthan, in order to learn Hindi. Rich documents her experiences—ranging from the bizarre to the frightening to the unexpectedly exhilarating—using Hindi as the lens through which she is given a new perspective not only on India, but on the radical way the country and the language itself were changing her. Fascinated by the process, she went on to interview linguistics experts around the world, reporting back from the frontlines of the science wars on what happens in the brain when we learn a new language. She brings both of these experiences together seamlessly in Dreaming in Hindi, a remarkably unique and thoughtful account of self-discovery.

I was intrigued at the thought of reading about an adult learning a second language and once I’d got a copy, I read it fairly quickly. Never having had the pleasure of visiting India, I emailed Sunita to ask her opinion on it and we agreed to do a dual review. Though we both found certain things about it to be interesting, ultimately the book didn’t live up to what we hoped for.

Jayne: Her actual experiences are interesting – usually, even more so when she can tie them into known language learning situations, academic approaches to language learning, plateaus and real life examples. There are times when she tries to bring in discussions and arguments in the 2L community when the narrative veers off course and flounders around. I found myself skimming these. Short and sweet worked but lengthy discourses that deviated too much from her life in India didn’t.

Sunita: I agree that the constant switches between her life and the academic research on second language acquisition didn’t work. Sometimes (often?) she would switch in the middle of a paragraph, and I felt as if she was trying to find an academic reason for each of her language-learning difficulties. At first it was interesting but it got wearying after a while.

Jayne: She was initially in India during a pivotal period of world events namely 9/11 which affected her start in India, her name at the deaf school she volunteered at – which the children invented as a plane flying into a tower – and the fall out of anti-Muslim/pro Hindu violence that erupted in chilling events there.

Her actual time spent in India is usually told straight forwardly but there are times when she builds up to some major reveal and then backs off and doesn’t deliver the promised goods until much later. She meets lots of people outside of her host family and the other scholars and teachers at the school but many of them bounce in and out of the frame and I wasted time trying to remember who they were when they reappeared chapters later with no reintroduction.

Sunita: That’s a really good point, and I think it’s something quite a few readers would have problems with. I was mostly able to keep them straight but I think familiarity with the names as well as familiarity withe the different roles the Indians played helped too. I can get lost when I’m reading a book set in a different culture, and I think that’s a potential problem here.

Jayne: Well, for me it wasn’t all about keeping the Indians straight as I had trouble remembering who some of the expats were too. Another thing that didn’t interest me as much as it did Rich is the time she spends when she veers off-road – so to speak – and delves into sign language. But her observations on how the Indians view her are fascinating. As an older, middle aged divorced woman she faces obstacles her younger and male colleagues simply don’t.

Sunita: Yes, I agree. She fits in well with the Western, expat residents, but to many of the Indians her decision to study Hindi, while flattering, doesn’t make sense given the roles assigned to women of her age. I also thought it was interesting that they couldn’t have cared less about her career. She isn’t in a role they recognize, i.e., doctor, professor, engineer, so they just ignore what she does.

Jayne: As for her second language learning as an adult, she seems to hit and reach all the issues, snags, roadblocks, highs and lows which are common for people attempting the same thing. For anyone thinking of tackling a second language as an adult, this is valuable insight into what they might face and need to be wary of and overcome.

Sunita: I mostly agree, although I think she commits the common fallacy of acting as if her difficulties are generalizable and understandable. Sometimes I just wanted to tell her, “you’re bad at it because you’re bad at it.” I thought it was interesting that Helaena, the much younger, apparently less committed student, was so much faster at picking up the script. I never really understood why Rich had so much trouble.

Jayne: Well, she certainly tries to come up with lots of academic reasons for it. I worried that this would turn into an “Eat, Pray, Love” experience of intense navel gazing or a “me v. them discussion” of the US and India. For the most part, I’d say it avoids these pitfalls but there are sections devoted to the sectarian violence going on – such as in Gujarat – that are told from her POV and during which she takes strong exception to anyone who sees things differently. But readers do NOTE – the violence is horrific as relayed by Rich, some events are described though not in minute detail and lots of it could be triggering.

Sunita: Yes, I agree. I can’t comment usefully on her accounts of the reactions to the Parliament attack and the 2002 Godhra riots because I can’t see them as an outsider (I’ve studied riots in Gujarat and India more generally for a long time and I’ve spent quite a bit of time talking to people who were present and/or involved). Her view is necessarily an incomplete one, but that’s not a bad perspective, especially since the book is for a Western audience. The one thing that did strike me was that when horrific events occurred, she never talked about finding a Western paper, e.g., the Wall Street Journal, the International Herald Tribune, or a UK paper like the Times. When I’ve been in India during crises I’ve always made it a point to find out how things are being portrayed by the non-Indian press, and most visitors I know have done that too. It was a strange lacuna for me.

Jayne: That’s a good point about which news sources she sought out or didn’t seek out.

The book teaches about learning a second language and immersing oneself in a different culture. but I think some of the impact of these things is diluted by too much time spent on academic theories and some boring travelogues which felt more like being told about someone’s vacation pictures instead of merely having to sit through seeing them without yawning too widely. The writing style was also unwieldy at times, often forcing me to reread a sentence when I’d lost track of it midway. It’s interesting yet it’s dull and it presents some ideas about language that are worthy of thinking more about but the negatives of the narrative ultimately weigh the whole down to a C+ for me.

Sunita: That’s a great way to put it, that it’s like being told about someone else’s photos. There was always this distance in her writing, and the people only came alive once in a while. The book was really about her, not the people around her, which I suppose is understandable in a memoir, but I would have like to have read about both. It was a C for me.

→ Jayne
Previous article: GUEST REVIEW: The Baron Next Door: A Prelude to a Kiss Novel by Erin Knightley
Next Post: Thursday News: Popular French blogger sued, authors hope to solve the Amazon-Hachette dispute, a bookmark that “reminds” readers to finish a book, and a case of real life amnesia