Following an enthusiastic recommendation from Lou of The Book Pushers, I picked up your Leviathan Trilogy, a YA steampunk series, to read with my husband. The series is set in a fun, detailed and engaging if not 100% believable world where World War I is a clash between two technologies, one DNA based (“Darwinist”) and the other electromechanical (“Clanker”). 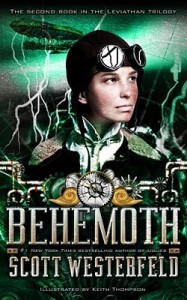 Book two of the series, Behemoth, picks up where Leviathan left off, with the intrepid girl Deryn Sharp still disguised as a boy, “Dylan,” so she can serve as a midshipman aboard the Darwinist British whale-based airship, the Leviathan, and Alek, the Austri-Hungarian prince whose parents’ assassination started the war, still aboard the Leviathan as well, and still hiding his own identity.

While Deryn knows Alek’s secret, Alek still thinks of Deryn as Dylan, a boy he admires and wishes he could be more like. Alek’s companions, Count Volger, Master Klopp, Bauer and Hoffman, are piloting the Leviathan for the Darwinists, due to the airship’s acquisition of Clanker engines in the previous book.

In the wake of the incident, it becomes clear to Alek, Deryn and Count Volger that as soon as the Leviathan’s crew learn to operate the Clanker engines, the Austrians on the ship will be detained. So Alek and Volger begin to plan their escape from the Leviathan, while Deryn, who has budding romantic feelings for Alek, turns a blind eye.

Meanwhile, the Leviathan arrives in Istanbul, its destination. Dr. Barlow, the airship’s clever “Boffin” has assigned Deryn and Alek to take care of the gestating eggs which she engineered. One of the eggs is intended as a gift for the Sultan, to be given in a gesture of good faith and the hope that the Ottomans keep out of the war.

But the Germans are already in Istanbul, manipulating the Sultan and attempting to take control of the situation. One attempt after another of Dr. Barlow’s to reach out to the Sultan and the Ottomans is foiled by the Germans’ machinations.

If the Germans learn that Alek is in the vicinity of the city, they will certainly try to kill him, since he may be the Archduke’s heir and one of the few people who, if he ascends to the throne, could call off the war.

As Deryn and Alek work to defeat the Germans, their friendship and loyalty to each other continue to grow. But can the feelings of two fifteen year olds amount to a hill of beans amid the Clanker/Darwinist conflict?

Behemoth has some of the same strengths and weaknesses of its predecessor, but overall it was less successful for me than Leviathan.

I’ll start with the novel’s strengths before moving on to my problems with it. First, there is Deryn. She is appealing in many ways: a quick thinker, a courageous young officer, and a teen girl character who is strong and resourceful. I think she’s a more empowering heroine for girls to read about than Bella or Katniss.

Deryn also has human flaws that make her relatable. She gets stressed, impatient, and even though she has feelings for Alek, who has told her his secret, she doesn’t want the secret of her gender to be uncovered and won’t reveal it to him.

The world, in which huge robotic vehicles battle giant genetically engineered creatures is imaginative and impressive, and Keith Thompson’s illustrations show that these inventions have been well thought, as well as make them easy to visualize.

The setting of Istanbul also comes to life with vivid descriptions such as this one:

Istanbul was already lighting up before her. Clanker electrical were harsher than the soft bioluminescence of London and Paris, and what had seemed a ghostly glow from the airfield was dazzling this close. The city looked like a fairground coming to life, all glitter and brilliance.

Touring Istanbul on foot wasn’t like looking down from an airship or the howdah of a giant elephant. The smells were sharper down here—unfamiliar spices and walker exhaust snarled in the air, and pushcarts full of strawberries passed, leaving a sweet haze in their wake, along with a few hungry-looking dogs.

And there’s an interesting gender dynamic in the series in that Deryn, the girl, is the brave, confident, competent one while Alek is less sure of himself and occasionally bungles things.

Now for the weaknesses. Alek is a sympathetic character and has grown some since the beginning of the previous book but he’s still a lot less intriguing than Deryn.

That is not a problem when the two are together, but when their storylines veer off in different directions and the two go their separate ways, as happens for a good portion of this book, it becomes an issue. I found myself invested in Deryn’s chapters, but for the most part, bored by Alek’s, and eager for the protagonists to reunite.

The characters also seem young for their age. This is a YA for younger teens and for preteens, and kids may enjoy it more than I did. Reading it as an adult, and one who loves romantic storylines, I got impatient for Alek to learn Deryn was a girl and for Deryn’s feelings to be reciprocated.

With the exception of Dr. Barlow, the side characters, an American reporter and some Ottoman anarchists, didn’t engage me much either, even when a fair number of pages were devoted to them. I’ve come to the conclusion that character development takes a backseat to setting and worldbuilding in these books, and that is a disappointment for me.

Speaking of world/setting, there’s also less of the Leviathan in this book than there was in the previous one. The airship, an ecosystem of creatures, was one of the most exciting things in the Leviathan, and has no counterpart in Behemoth. The Ottomans’ animal-shaped mechanical walkers don’t hold the same fascination, and although there is also a clever and cute Darwinist creature in this story, it doesn’t have the same degree of magic.

Like many middle books in YA trilogies, Behemoth suffers from the “sagging middle” problem – there are fewer exciting twists and turns in its plot. I have hopes that book three will be more compelling, since the final last hundred or so pages of Behemoth certainly were. But that was not enough to make up for the middle-of-series doldrums, so I give Behemoth a C-/C.