Your steampunk YA, Leviathan, was recommended to me on Twitter by one of The Book Pushers. I believe it was Lou. Lou loved the book so much that I decided to put it on the list of possible books to read with my husband. Flash forward a few months, and we were reading it. At first I wasn’t sure about this novel, but it did eventually grab and satisfy me. 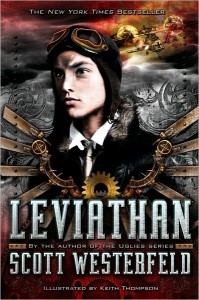 Leviahtan takes place in an alternate version of Europe during World War I. In its world, Europe is divided by two kind of technologies. Some countries are inhabited by “Clankers,” those who use machine technologies, and others by “Darwinists,” who rely on genetic engineering for their technological advancements.

Like World War I, Leviathan begins with the assassination of Archduke Franz Ferdinand of Austria-Hungary. In Leviathan, however, the Archduke’s children are replaced with an only son, Aleksander.

Alek learns of his parents’ deaths after his fencing master, Count Volger, and his father’s master of mechanics, Otto Klopp, spirit him away from his home on the pretext of offering him a lesson in piloting a towering battle machine called a Stormwalker.

But though their methods are unkind, Volger and Klopp’s purpose is to save Alek’s life. As they journey in the Stormwalker (which Alek does, indeed, learn to pilot) toward the safety of neutral Switzerland, they encounter many dangers, and Alek changes from a sheltered boy into a young but weary soldier.

Meanwhile, Alek’s storyline is interspersed with that of Deryn Sharp, a fifteen year old girl determined to join Britain’s air force. Deryn, as much a Darwinist as Alek is a Clanker, loves her nation’s flying “beasties,” the living zeppelins her father took her flying in when he was alive.

Deryn’s mother and her aunts don’t understand her desire to join the military, into which women are not allowed. But Deryn is aided by her brother Jaspert, who helps her prepare for the air force’s entrance exam.

On the day of the exam, Deryn, dressed as a boy and posing as a cousin of Jaspert’s named Dylan, is sent up in a jellyfish-based creature, but an unexpected storm carries her away. She is rescued by the crew of the Leviathan, a whale-based flying ecosystem bound for France.

There she is made into a midshipman, and she comes to adore life aboard the Leviathan. When the crew is rerouted from their original mission in order to pick up a female Darwinist doctor and a mysterious box which they are to ferry to the enemy country of Turkey, Deryn has a chance to prove herself. But she is also afraid that their new guest will uncover the secret of her gender.

The novel cuts back and forth between Alek and Deryn’s storyline threads until well past the midway point, when the two characters’ paths cross. And that’s when things get really exciting.

I don’t want to spoil Leviathan for readers, but I will say that my husband and I enjoyed reading it, although it took us a while to get to that point of being fully entertained.

Initially, the problem was that Deryn’s storyline was more compelling than Alek’s. Alek was a passive character who, much of the time, allowed Count Volger to steer his course. In the first half of the book, he pretty much did what Volger told him to do.

Deryn, meanwhile, was a daring, plucky girl from the beginning, and had several opportunities to make her own decisions and choose her own path. Her secret made her more intriguing, while Alek initially came off as the more childish and sheltered of the two.

But around the point where Alek and Deryn meet, Alek starts to make his own bold choices, and becomes a more compelling character. Whereas before, I had a tough time connecting with his losses, I began to feel genuine sympathy for him late in the book.

Another reason it took me a while to connect with Alek, and for that matter, to a lesser degree even with Deryn, is that Leviathan is a plot driven novel.

The plot is a good one, fast-paced and full of turns, but initially the events came so fast and furious that there was little page space given to moments of reflection that could show the characters’ inner lives.

As a reader who prefers character-driven books I really need those moments in order to connect to the characters’ needs, goals and desires, and to care about them. Fortunately, as Leviathan progresses, we get more and more of those moments, and the second half of the book is far more satisfying than the first. Due to a greater investment in the characters, the action sequences became genuinely exciting and it became very difficult to put the book down. By the time we reached the end I was eager to read the sequel.

No review of Leviathan would be complete without mention of the worldbuilding, some aspects of which were not entirely successful for me and others of which were excellent.

I’ll start with the less successful. The world bears only a very superficial resemblance to our own World War I era, so that I had a tough time imagining it changing that much due to all the steampunky technological developments. Also, I was not really sold on the Clanker/Darwinist division by nation. It seems highly improbable to me that the technologies used would completely change at a border.

At the same time, though, it was clear that a tremendous amount of thought had been given to how the technology, whether mechanical or biological, worked. This is where the book really shines. The Leviathan ship/”beastie” herself comes across as an incredible creation, with various creatures serving the functions of weapons, energy providers, and alarms. So while the politics of the world weren’t always convincing, the flamboyant and fascinating war machines and war creatures were consistently so.

By the end, I didn’t mind the weakness in the political and social aspects of the world-building much, because I came to see Leviathan as a rousing feel-good adventure story. Like some blockbuster science fiction movies I could name, it works best when one expects a fun ride with some breathtaking creatures and/or settings, rather than a fully detailed and believable world.

In addition, the unlikely friendship and potential romance between Alek and Deryn was heartwarming. I look forward to Behemoth, which my husband and I plan to read soon. C+.