REVIEW: A Spear of Summer Grass by Deanna Raybourn

Paris, 1923
The daughter of a scandalous mother, Delilah Drummond is already notorious, even amongst Paris society. But her latest scandal is big enough to make even her oft-married mother blanch. Delilah is exiled to Kenya and her favorite stepfather’s savannah manor house until gossip subsides.

Fairlight is the crumbling, sun-bleached skeleton of a faded African dream, a world where dissolute expats are bolstered by gin and jazz records, cigarettes and safaris. As mistress of this wasted estate, Delilah falls into the decadent pleasures of society.

Against the frivolity of her peers, Ryder White stands in sharp contrast. As foreign to Delilah as Africa, Ryder becomes her guide to the complex beauty of this unknown world. Giraffes, buffalo, lions and elephants roam the shores of Lake Wanyama amid swirls of red dust. Here, life is lush and teeming-yet fleeting and often cheap.

Amidst the wonders-and dangers-of Africa, Delilah awakes to a land out of all proportion: extremes of heat, darkness, beauty and joy that cut to her very heart. Only when this sacred place is profaned by bloodshed does Delilah discover what is truly worth fighting for-and what she can no longer live without.

I’ve read – and enjoyed – most of your Lady Julia Gray mysteries. Your foray into the gothic in The Dead Travel Fast wasn’t as much of a hit with me. Still when I noticed this book at Netgalley, my antennae perked up and I zipped over my request to read it. A book set in the 1920s and in Kenya? Cool and so NOT a Downton Abbey clone. Bring it! 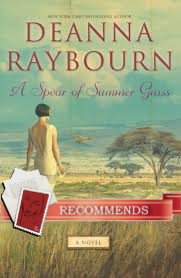 My initial impression was these people are J Peterman catalog come to life. Both in Paris and in Kenya, the crowd among whom Delilah lives and with whom she was brought up are just the type of people to have perfumes designed just for them and carried in special handcrafted fitted leather train cases. This is the smart, sophisticated set who do live it up, use cigarette holders and dance until dawn in riotous clubs run by androgynous managers. This is the age when people still monogrammed linen and flatware upon which divorce changing names would wreck havoc. And that’s before we even get to Africa and the safaris. Thank goodness for the dukas there where one can stock up on those little necessities like duck confit, goose pate, champagne and whatnot before heading out into the bush. One must be civilized after all.

Kenya is only referred to by that name a few times – usually it’s “Africa” that is said but is this what the white settlers and visitors would have used given the colony’s name? I’m wondering how the race relations aspect of the book will go over. It’s not all “white settlers arrive and teach the natives a thing or two” or worse yet “whites arrive to save the day.” In fact, the political unease is already simmering and the whites are aware that things might not stay quiet for long. In trying to salvage a bad situation, Delilah even makes things worse before she does the “grand gesture” that saves someone – and wrecks his life.

At times Delilah is not an easy heroine to cheer for nor an easy woman to even like much less love. But she is unique and as her mother writes her, if one is going to hell one might as well dance all the way and give people something to remember you by. She’s a true image of a 20s flapper with a Parisian couture wardrobe to die for, a taste for Sobranies, sex and the ability to slug back massive quantities of booze. She is also abrasive if she’s annoyed, hellbent on getting her own way and a damn good shot. I found her fascinating and cheered as she got the better of just about everyone in the story.

Ryder is larger than life as well. Truly a man’s man in a man’s world. He’s suave, fearless, has bedded most of the white women in the colony, has the natives fighting to be porters on his safaris, can also down rivers of alcohol, smokes like a faulty 2 cylinder engine, can track any animal across the savannah and then deliver a horse whipping to cads in full view of the crowds at the Nairobi train station. Yet he can be gentle to Delilah’s poor cousin Dora and is far ahead of his time in terms of conservation.

Delilah and Ryder are of course much alike in that they’ve been badly hurt in love before but in different ways. Delilah might as well have crawled in the grave with her first husband while Ryder learned too late whom his first wife really loved. Both have tried to cover their hurt in similar fashion – by partying and by indulging in a glut of one night stands and – in Delilah’s case – ultimately empty marriages. Though she did be faithful to each husband while married to him. The pain they’ve each suffered cut so deeply that they’ve evolved ways to dull it to a haze of oblivion and show me more by their actions than any protestations that “they’ll never love again.”

As such, it takes a lot for either one to show the cracks in the facade much less let someone into their hearts. They fight almost like it’s foreplay and end up attacking each other as much as it’s having sex. There’s truly nothing pretty about that encounter. So if it’s not nookie that brings them together, what is it? Something I like to see even better and which means more to me about how two people think about each other – in their every day actions. Delilah proves she’s got the grit to not only survive but thrive in Africa. She takes care of what needs doing even if it’s distasteful to her, she has standards below which she won’t sink, she’ll stand up for what is right and heaven help anyone who crosses her. Ryder is loyal to his friends, willing to bend the law when the occasion demands and it’s for a good cause and cheerfully takes advantage of idiots who only want to go out and shoot something. He also comes through in the end with a grand gesture of love – even if Delilah initially has to have it spelled out for her

In the end, neither Delilah nor Ryder is perfect. I foresee fights and smashed liqueur bottles galore as they work out their relationship but they’ve come so far from where they were and have helped each other heal that even with the probable fireworks, I think they’re well suited and headed for a HEA. B