“It’s 1777 when Captain Jack Absolute becomes a sensation throughout London. This news comes as a shock to the real Jack Absolute when he arrives in England after four months at sea. But there’s little time for outrage before he finds himself dueling for his life. Right when he thinks he’s finally won, he is forced to flee London by the quickest means possible, becoming a spy in the American Revolution. From the streets of London, to the pivotal battle of Saratoga, to a hunt for a double agent in Philadelphia, this novel marks the exhilarating beginning of an epic historical series and a character you won’t soon forget.”

When I initially saw first the cover of this book and then read the blurb for it, I immediately requested the arc from Netgalley. I adore books set in the 18th century and especially those set in the American Revolution – which seems to have fallen from favor over the past 10-15 years – or those that look as if they will be swashbuckler-ish. This book should have rung my bell in all the best ways. Unfortunately I find myself willing to put it aside for a number of reasons, many of which I acknowledge are personal and not the fault of the book. 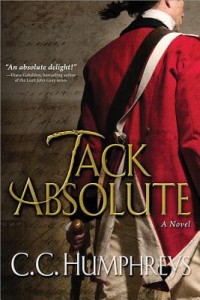 I must have been scanning the blurb through rose colored glasses and reading into it what I wanted to find. What I was expecting of a hero described elsewhere as the “007 of the 1770s” was more romantic town-centered daring do-ish romp than what I found 1/3 of the way into the story. I thought the setting would be more in London and Philadelphia instead of on board ship and in the wilds of upstate New York. Jack is forced to flee London after a duel with a character who strikes me as one of these types who will dog Jack through the story. I use the verb “dog” for a reason as the man also comes off as a rabid OTT villain – a type I dislike and try to avoid in my reading. The fact that Jack has strong ties to the Mohawk tribe and can rough it better than some of the warriors of the tribe came as a surprise. It also brings into the story the tragic effect the War had on the Haudenosaunee (Iroquois) Confederacy. The rents in the fabric that would eventually split the Confederacy apart are mentioned early on and I just wasn’t up to watching this happen as I find it too depressing. I also wasn’t excited at the prospect of seeing the terrible way the war played out on the frontier. Though I have read books featuring it
( Independent Heart ) the tone here was feeling especially grim.

Another thing bothered me that I wasn’t expecting. Jack is obviously a British hero working on the side of the Crown. I knew that and was actually looking forward to seeing his side and POV on the war. Jack is intelligent, competent and has a high respect for the Colonials beside whom he fought in the French and Indian War. He wants to bring the Colonies back in the fold as brothers rather than scolded children. But he’s dismayed and handicapped by his fellow British officers and the Loyalists surrounding him. Despite being a patriotic American, I actually found myself sympathizing with the poor man as he was driven towards banging his head against a brick wall and tearing his hair out due to the incompetent and or drunken knobs with whom he was working. This aspect of the story seemed like it was going to do a number on my blood pressure.

The final nail in the coffin is a subplot dealing with a secret society. I hate secret societies. No, let me go further and say I loathe them as plot devices and avoid them if possible. It’s one reason I seldom read romantic suspense novels as they are often chock full of uber black ops groups. I did keep reading far past the point when the Illuminati are first mentioned but it gnawed at me each time they came up and finally I tossed in the towel.

At some future date, I might very well go back and attempt to finish this book. The writing is well done and the plot seems to be solid even if not to my taste. Some things would always bother me but perhaps the grimness might not be such a factor to me as it is now. Some personal issues in my life right now are leading me to put aside darker books for the time being – something that is certainly not the fault of this book. Readers interested in an intelligent and flawed anti-hero in a book set on the brutal frontier during the American Revolution need look no further.