It pains me to write this review of The Oleander Sword (book two in the Burning Kingdoms series, which began with The Jasmine Throne), because while this isn’t a terrible book, The Jasmine Throne was my favorite book of 2021, as well as the most romantic and lyrical book I read in last year, and I had such high hopes for its sequel. 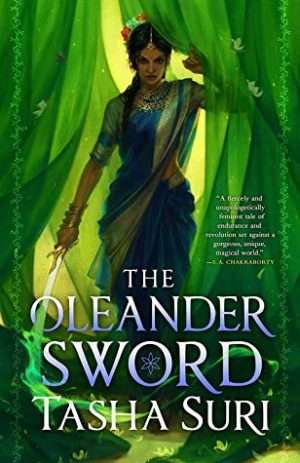 The Oleander Sword begins with a prologue in the POV of a new side character, Kartik, who is sweeping a courtyard in the Parijati imperial palace in Harshinghar when he overhears a conversation between Prince Chandra, the “spare” to the heir to the Kingdom (Aditya), and the high priest, Hemanth. Hemanth tells Chandra to protect his sister, the royal princess Malini, asking “Have you ever seen a girl of greater purity, my prince?” Though Chandra doesn’t answer the question, Kartik does, in his heart. Malini is the purest girl he’s ever seen.

Chapter One then begins and the story shifts to the present day. When we last saw Malini, she had just used an opportune moment—Rao’s revelation of the prophecy that she would be the one to name Parijadvipa’s next leader—to crown herself as Empress. Now Malini travels with an army comprised of soldiers and princes from all the kingdoms of the empire. All the kingdoms except Ahiranya, Parijatdvipa’s oppressed former enemy.

Malini misses Priya constantly from a great distance, but she has to keep her feelings a secret. When they last parted near Ahiranya, Malini promised Priya and Priya’s childhood sister, Bhumika, that if she succeeded in attaining power for Aditya and deposing Chandra, she would free Ahiranya in return for Ahiranya’s support now. Bhumika and Priya agreed, and as this book begins, Bhumika allows traders from Malini’s retinue into Ahiranya’s borders, while Chandra, whom Malini is battling for the crown, loses his own traders through magical means.

Malini believes in keeping her promises (not just to Priya and Bhumika, but to everyone she recruits); her word is her bond. But she cannot express her yearning for Priya except in unsent letters (all but one—Priya’s revealing response puts a stop to Malini’s private communications with her). Queer relationships are forbidden in the Parijati empire, and an empress is the last person who can break such a taboo.

As for Priya, she is now a temple elder in Ahiranya, with considerable magical powers including the ability to halt the spread of the rot that plagues Ahiranya’s people and its crops. She leaves the politics to Bhumika, who is far more adept at them, and focuses on that. While she misses Malini badly, she accepts that life has taken them down two different paths. Even if Malini asked her to join her, Priya doesn’t feel she could abandon her people when they need her aid.

Back in Harshinghar, Chandra and Hemanth debate how best to lead their war. Chandra has burned many women to produce magical fire, but the priest is convinced that the burning of a scion of Divyanshi—such as Malini—would grant them greater power, particularly if she rose to the pyre willingly. Chandra wants to kill Malini rather than win her consent, and whether he can be persuaded otherwise isn’t clear.

There’s also a debate among Malini’s generals, this one about how to handle the High Prince of Saketa, the one holdout kingdom leader who refuses to cooperate with Malini. He is firmly allied to Chandra because Saketa’s crops are infested with rot and his people therefore depend on food supplies from Parijatdvipa.

The high prince and his people reside in a maze-like fortress. No one who leaves ever comes out. Malini doesn’t think there’s a point to a siege, but she concedes to her general, Lord Mahesh. She needs Mahesh’s support too badly, and it’s evident that he would rather follow Aditya, who is now part of Malini’s retinue but still a retiring priest of the Nameless faith. Mahesh and others among the princes and lords who have joined Malini are sexist, and it’s easy for him to undermine her.

The siege goes very badly indeed. Malini’s army is attacked by an army of priests wielding unnatural fire—flames that jump to people and attack them. Many in Malini’s army believe it to be the holy Mothers’ fire, the kind that resulted from the immolation of Malini’s ancestor Divyanshi and two other royal women and defeated the Yaksa during the Age of Flowers (a long-ago time when Ahiranya was Parijatdvipa’s oppressor). Malini disputes this but many of her men, including Mahesh, believe it, and that deflates everyone.

Malini herself survives the battle—surprisingly, she is saved by a tattooed priest. The priesthood is firmly on Chandra’s side (he has elevated them to power) so this is a mystery. In the wake of the battle, Malini sends a coded message to Ahiranya. Not a love letter to Priya, but a request for aid.

In Ahiranya, Bhumika is waging diplomatic battles on multiple fronts. The high born, who supported the insurgency against Parijatdvipa, now grumble about the loss in trade with the empire and want her to open the borders to Chandra’s traders. They don’t believe that Malini will defeat him. Meanwhile, the late Ashok’s rebels, now self-dubbed the mask keepers, demand to pass through the deathless waters again.

Bhumika and Priya confer on this last topic. The mask keepers aren’t biddable and not all are of the same mind about Ahiranya’s future. On the other hand, Bhumika and Priya need more temple elders to help them hold back the spread of the rot. And that need becomes more urgent once Bhumika persuades Priya to go help Malini as Malini has requested.

There is also some attention to Priya’s tightness with her longtime friend, Sima. It’s important to Sima for them to be more equal, to feel useful and included, so Priya invites her to join her on the journey to Saketa.

When they reach Saketa, Priya and Sima encounter numerous challenges. The biggest is gaining acceptance from Malini’s people. As Ahiranyi, they are hated and feared (especially Priya, with her magical powers). Further, Malini can’t acknowledge her closeness to Priya in public, and to help her, Priya must take a more subordinate position, one that allows Malini to command her to bow to effigies of the Mothers at a temple they stop in. It’s the only way to even half convince Malini’s men that Malini hasn’t made a grave error in allying herself to the Ahiranyi.

Priya and Bhumika had planned to communicate in the Sangam (a mystical realm where three rivers meet) but the ability disappears, and that alarms both of them. Communication resumes later, though, and Priya is much relieved. But that’s not the end of their troubles, only the beginning. Because Priya was “hollowed” by her passage through the deathless waters, and only now is she starting to learn what that hollowing means.

As I said, I was disappointed in this book. My biggest issue is that the romantic relationship stays in a holding pattern for much of the book. Priya and Malini don’t reunite until a third of the way through the book, and then the presence of Malini’s people prevents Priya and Malini from having much privacy, so for a long time the only significant thing that happens from a romantic standpoint is that they wish they could have time alone together.

I feel that their romantic feelings could have been reinforced more if their commonalities had been consistently highlighted as they were in the first book. The two of them are in different places in life now than they were in The Jasmine Throne, so I needed to be shown why they were still meant to be. I didn’t feel the romantic tension nearly as much as I had in the earlier book.

In terms of their relationship and in terms of Malini’s overall arc, this reads very much like a bridge book, written to set up a stronger book three. In the last 25% of the book, important developments take place in the Priya/Malini relationship (as well as in the larger political arc). But much of the preceding 75% drags romance-wise and that makes the ending feel like too little too late. Just about every other relationship in the book—Priya/Sima, Rao/Aditya, Rao/Lata, Bhumika and just about everyone in her world—is more engaging than the central one.

Another issue I had was that there was SO MUCH focus on the army. Reading about armies is just not my thing. I kept wanting to go back to Ahiranya, where everything is lush and green, and leave this dusty army of stodgy men.

What saves this book—to the degree that it’s saved—is Bhumika. I never thought I would say this, but her storyline was so much more fascinating and absorbing. Her situation was filled with high stakes and moving scenes, and her interactions with just about every person we saw her with—Rukh, Jeevan, Kritika, Ganam, her daughter Padma, and eventually others—created indelible scenes and powerful situations. The Ahiranya sections of the book reminded me why I loved The Jasmine Thorne so much, and how gorgeously Tasha Suri can write.

There is much else going on in the book that I don’t want to spoil, but I’ll mention a few things in brief. Rao is struggling with regard to his loyalty to Malini, since she doesn’t appreciate just how important she is to him in terms of his Nameless culture and faith. Chandra is also struggling, and boy, is he evil. But Suri made me understand where that came from to a degree, so he wasn’t quite as cardboard as he might have been. Chandra also gets married in this book, and I felt for his wife. In addition, Kartik’s role in the story is eventually revealed.

One more thing readers should know: this book is darker than The Jasmine Throne. There is some eerie and disturbing stuff that happens. Though I often hate scary things in books, I actually loved it here. It was so atmospheric and magical, in a dark way.

What can I say to sum up The Oleander Sword? It’s the weakest of Tasha Suri’s five books for me, but based on how it’s set up, I expect that book three will be a lot better. I will read it, definitely. Nevertheless, I’m bummed. C+.