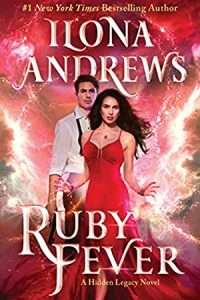 Ruby Fever is the culmination not just of Catalina and Alessandro’s romantic arc but also, at least for now, of the Hidden Legacy series. I gather from your blog (and from the very end of this book) that you do have plans for Arabella but it will be a while before you write her story and you are not contracted to Avon for it.  I certainly hope you write it one day but at least you don’t leave readers hanging and the main threads of the overall story arc are wrapped up in this book.

As I’ve come to expect from this series and your books in general, it’s a tightly written, exciting and action-packed novel with plenty of tension and enough romance to keep me happy. Plus magic and explosions. On the other hand, because it has so much work to do in wrapping up the series, there are also some things which are hand-waved, underdeveloped or a bit too convenient.

This installment takes place some time after Emerald Blaze. The Baylors have moved into a new property where there are a number of residences so that the family can spread out and have privacy but still all be together and share protection. Catalina and Alessandro are living happily together and planning to marry at some stage but they’re not in a hurry.

As the main story begins, there is a drama at the Baylor Compound when a very valuable spider goes missing. This was a bit challenging for me to read as I am an utter arachnophobe and the particular kind of arachnid this was was the very worst for me (a t-word). Do. Not. Like. (Honestly, what is it with spiders? I just cannot deal.) My phobia is such that even reading the t-word gives me the shudders and I do not ever voluntarily write it or say it, and I certainly never voluntarily look at one. I go to extreme lengths to avoid creatures of the 8-legged variety. The fact that I continue to read the book should be regarded as high praise for your talents. Perhaps some DA readers will laugh or roll their eyes but for me, this is a serious issue and not a laughing matter. For me, it’s as serious as locking a claustrophobic person in a tiny cupboard. (My husband says my superpower is teleportation but it only works when I see a spider so it is of extremely limited value.)

Anyway, happily, the critter is not the main focus of the story and doesn’t come up a lot. It’s kind of the comic relief (if one can find such things funny. Not me, but I can see that others will).

The main story involves an assassination of the Speaker of the Texas Assembly (the governing body of the magical houses of Texas) and an attempt on the life of Warden Linus Duncan. (This happens in the first two chapters so it’s not a spoiler.)

Linus is alive but whether he will remain that way is unclear and for now, Catalina is Acting Warden.

There’s a connection to Arkan and the stolen Osiris serum and over the course of the book all the threads come together. The identity of the Baylor sisters’ grandfather is revealed. I’m not going to say here who it is but I think most of us guessed anyway.  The identity of Caesar (remember him? from Nevada’s trilogy?) is also revealed. (As to Caesar, I’d have to re-read the entire series Hidden Legacy series from Burn for Me to really know how well it all fits together; I’ve forgotten so much), but my feeling right now, based on what I remember from earlier, is that the resolution to the  Caesar story is a little too convenient.

Some things felt a little rushed or underdeveloped (Penelope & Benjiro’s relationship for instance). I missed that there was not much Grandma Frida or really much Arabella in this book. There’s not much Augustine. Only a little Leon. I’m happy about Bern and Runa though. I suspect some of it was because of the limitations of word count but not all of it. I suspect that other bits were about trying to wrap everything up in this book because a book or trilogy for Arabella is not a foregone conclusion.

Nevada and Rogan were in this book at critical (and, again, convenient) times but also, were (conveniently) unavailable at other times so that Alessandro and Catalina had to do the heavy lifting. I mean, of course. This is Catalina’s trilogy so it’s not a criticism exactly. If Nevada and Rogan turned up and just fixed everything that would be very unsatisfying so you had to come up with ways to keep them out of the picture. It’s a tricky bit of prestidigitation to pull off and sometimes it felt a little bit like I saw the authorial hand rather than just the magic.

I’m not super happy with how the storyline with Victoria ended up. She is not a good person and I’m not all that into trying to make her seem less bad. I’m very team Nevada on this.

I loved the way Catalina and Alessandro’s relationship has grown. I loved their trust in one another and I liked the ways  you had to show there are other challenges a relationship can have without splitting a couple up. There are also, of course, threats to life and limb for both of them but this is a romance series so I was never seriously worried about the HEA.

Even though the Hidden Legacy story arc is wrapped, you did tantalise with the glimpse into what might be in store for Arabella. Some might call it mean. Some might merely call it whetting the appetite. Whatever you call it, there will be vibrant speculation about her future. I’m sure you’ll be rubbing your hands together with glee over that. :)

I raced my way through Ruby Fever. It was exciting and the action kept me turning the pages when I ought to have gone to bed.

I have a feeling I missed some things because my memory of the earlier books – Catalina’s and Nevada’s – is, after all this time, a bit fuzzy. I am totally up for a re-read to see what I may have missed/forgotten. Maybe if/when I do that it will change my thinking about Ruby Fever; who knows?

Ruby Fever had a lot to do and for the most part it kept its promises but I can’t help but feeling at least some of what was in it was originally intended for Arabella’s book/trilogy and to wrap up the arc you needed to leave some other things out or smush them together too fast. Fortunately, the romance parts were not underdone at all so overall I’m calling it good.

→ Kaetrin
Previous article: REVIEW: The Oleander Sword by Tasha Suri
Next Post: REVIEW: The Undertaking of Hart and Mercy by Megan Bannen