This beautiful standalone science fiction novel was one of the novels on my “Best of 2020” list. I read it in December of 2020 and have put off reviewing for over a year because I felt hard put to do it justice. I’m finally taking the plunge after a conversation about it that made me realize I love it even more than I thought I did back then. 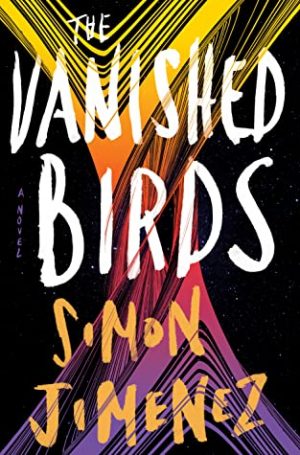 Nia Imani captains a ship that travels through folds in space. A megacorporation owns most of the galaxy and Nia works for the corporation collecting products harvested from poor, low-tech worlds. The story begins on Umbai-V, a world Nia visits every few months. Time dilation means that those three-month intervals take fifteen years on Umbai’s surface.

The novel starts in the viewpoint of Kadea, a seven-year-old boy to whom Nia gifts a wooden flute when they first meet. Years (for him) later, Kadea becomes Nia’s lover (their meeting in his childhood was brief so she doesn’t remember him) and is fascinated by how little she ages. Eventually he marries someone else even though he still longs for Nia. The last time he sees Nia he is elderly and he entrusts a boy to her.

The boy, Ahro, inexplicably fell from Umbai-V’s sky along with wreckage from a ship. Nia takes Ahro with her because no one on Umbai-V feels he belongs there. Ahro seems mute at first but music helps him express himself and bond with Nia and they quickly become attached. But Fumiko Nakajima, a wealthy celebrity for having engineered the four space stations (each named after birds nearing extinction) that enabled humanity to escape a dying earth, has plans for Ahro and she uses their attachment to involve them in a plot to defy the corporation.

Another chapter takes us back a thousand years and introduces us to the child Fumiko, who lives in Japan and whose mother is dissatisfied with her. Fumiko is awkward and often judged unattractive, so when she is a young woman and the lovely Dana falls for her, it’s a dreamlike experience. But Fumiko has already signed a contract with the corporation to work on the space stations. The project is completely secret and Fumiko can’t tell Dana what it involves, just that her employer requires her to seclude herself for the duration and that this could take years. Fumiko and Dana vow to write often and remain true no matter how long they are apart but eventually one of them breaks that vow.

A thousand years later Fumiko is still alive thanks to long periods of cryogenic sleep. She’s been searching for someone like Ahro for many years; she once saw a man teleport and believes that there are rare people who can. This, she theorizes, is how Ahro survived the spaceship crash. There isn’t much evidence of that but still Fumiko gives Nia a choice: sign a fifteen-year contract and be handsomely paid to travel with a crew chosen mostly by Fumiko, waiting to see if Ahro’s ability manifests, or lose Ahro to Fumiko, who is powerful enough to take him away. For Nia that is no choice at all.

The journey turns out to be an isolating one, and it takes Nia, Ahro, and the rest of the crew to the forgotten, sometimes derelict outskirts of the galaxy. Fumiko wants to keep this speculative side project a secret from the corporation since the company owns the rights to all her intellectual property in perpetuity. If Fumiko can learn how teleportation is achieved, she may be able to use the discovery for her own purposes rather than turn the information over to the greedy corporation.

Nia, Ahro and the small crew (who signed similar contracts with Fumiko) bond as the years pass, and Ahro grows up on the ship, becoming a sympathetic young man as he studies and learns skills from each of the crew members. Most of them view him almost as a surrogate son or younger brother; they are a tight found family bound by love. But what happens with Ahro is a test that love may not survive.

There were so many great things about The Vanished Birds that I don’t know which to mention first. The main characters are indelible, the worldbuilding creative and hauntingly beautiful, and the language spare and lyrical. The book is brilliantly structured; some of the chapters could be read as self-contained stories and yet the through line of the novel is so strong that the book never feels episodic. Some sections feel very much of the future, while others feel timeless and almost mythical.

From the first chapter that encapsulates Kadea’s life and evokes his never-to-be-fulfilled desire for Nia and for the stars, yearning is established as one of the story’s primary emotional tones, and it’s one that runs through the entire book.

The plot is engaging and the tropes feel fresh and original. This is primarily Nia and Ahro’s story, the story of a single mother’s unswerving devotion to her son and his matching love for her. It’s rare to see this kind of relationship at the center of a work of science fiction.

Then there is the story of Fumiko and Dana, a tale of a romantic relationship that goes awry and the thousand-year reverberations of its unfulfilled promise. There’s also a fresh deconstruction of the found family trope. The power of music and the oppression of unchecked capitalism are additional themes, and there are lovely epistolary sections too.

This is an #ownvoices book (Jimenez is gay and half-Filipino) and diversity is in its bone structure. It feels genuine and organic, and not like something an editor or agent told the author to throw in (there are some books these days that feel very much like that to me). You can tell the author is deeply invested in queer and POC portrayals though the characters don’t necessarily identify as such. Ahro is brown-skinned and gay, Nia dark-skinned, Fumiko Japanese and lesbian, and there are other significant characters from diverse backgrounds– one is gay, two are lesbian, one is asexual, one is nonbinary, some are POC, and there is strong disability representation with at least two of them.

And yet, the book is neither a fantasy about a world free of injustice nor a call to arms. The diversity simply is; a natural part of the world and of the characters, integral and deep. The absence of an overt statement about marginalization only makes the subtext that deals with it more potent.

The authorial portrayal shows a powerful recognition of the injustice that can be inescapable in systemic structures—in this case the systemic class structure created by the corporation. The company has extracted untold wealth and power from small, impoverished planets. Umbai-V isn’t the only world where the population isn’t afforded many opportunities or given much access to education, and the ship’s journey allows us witness this reality in unforgettable images.

For all the book’s near-perfection, it has one significant flaw.

The crew members never ponder the possible ramifications of the contracts they signed with Fumiko. Even Nia doesn’t give much thought to what will happen if Ahro develops the ability to teleport as Fumiko believes he can. She and the others think it’s impossible, but even so, the question of what Fumiko’s plans for him are should be something they weigh, given that they care about him. The fact that he never signed Fumiko’s contract doesn’t come under consideration either.

But though this was a significant issue, the fact that even a year later I am still passionate about The Vanished Birds speaks for itself, I hope. It is a gorgeous novel. I recommend it to every reader of speculative fiction. A.