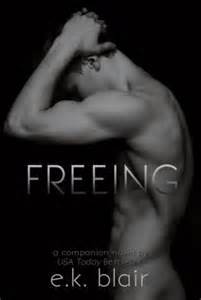 I read books #1 and #3 in the Fading series, Fading and Falling, last year. The two books essentially told the same story from the perspective of the two main protagonists, Candace and Ryan. Book #2, Freeing, covers much of the same time period but focuses on Candace’s best friend, Jase, and his romance with Mark, a musician and fellow student at the University of Washington.

Surprising (to me, anyway) admission: I don’t think I’ve read a m/m romance before. I’ve read plenty of books with gay secondary characters, and some erotica featuring m/m pairings, but I can’t remember ever reading a straight (no pun intended) romance that was m/m. It’s probably not an accident that I haven’t joined the m/m romance craze. With all due respect to fans of the genre, who I know are numerous, there’s something about straight women reading m/m fiction that feels exploitative to me, particularly when that fiction written by another straight woman. I can’t get over the sense of “othering” that the subgenre gives me. I’ve read various pieces on the reasons women read and write m/m romance, but the reasons given don’t entirely assuage my concerns. (I especially don’t like the “two men are sexier than one” argument, because it feels vaguely to me like what’s really being said is “I like it better when there are no icky girls to read about”, which I find problematic in a whole ‘nother way.)

Anyway, on to Freeing – Jase is a fourth year architecture major, originally from San Diego. Back at home, in high school, Jase was deeply closeted and dealt with his shame over being gay by screwing his way through the female population of his high school. His home life was painful after the death of his beloved older sister in a car accident – his parents pretty much shut down, and Jase felt that they were three strangers simply existing in the same house, rather than a family. Add to this the confusion over his emerging sexuality, and his sure belief that his parents will not accept having a gay son, and going away to college was as much an escape for Jase as anything else. He’s managed to build a life in Seattle; he’s out (more or less; more on that in a moment) and he’s found a best friend in another student, Candace. While she can’t replace his sister, of course, Candace does fill that place in his life that his sister’s death left empty, and the two are extraordinarily close.

Jase’s relationships in college have mostly been of the one-night or at least extremely casual variety. He has sex with men, but he’s much warier about forming actual emotional attachments. Why, exactly, isn’t ever entirely examined, but it’s clear that Jase continues to have issues with being gay. He still hasn’t told his parents, and he’s very uncomfortable with outwardly showing affection to another man in public. When he runs into Mark, whom he knows from class (Mark is also an architecture major), at a club one night, Jase is attracted and pleased to discover that Mark is gay and also interested in him. Something tells Jase right away that he doesn’t want to treat Mark like just another hookup, so they start dating, taking things slowly.

But Jase still has all of the emotional baggage he brought from California, and he deliberately sabotages the budding relationship, a move he almost immediately regrets. While he’s trying to decide if he wants to try to get Mark back and really try to have a real relationship, Jase also has to deal with Candace’s devastating rape, as detailed in Fading and Falling.

I believe Freeing is novella-length (e-readers have made it impossible for me to tell how long a book is, but according to Amazon, Freeing is 294 pages, compared to Fading’s 458 and Falling’s 541).  So a lot of story gets packed into a relatively small space. Since some of the same ground was covered in the other two  books, this isn’t necessarily a bad thing, but the same time I felt like there could have been more character development on some fronts.

Jase’s parents, for instance, are given no real personalities to speak of – I guess they had a happy family at one point, before his sister died, but there’s no sense of what they were really like. Now they are just cold and cardboard. Jase’s eventual coming-out scene felt stilted and cliché (“I’m your son!” “No. You’re not. Not anymore”), with his mother making a reference to his eternal damnation or some-such, which sort of came out of left field as there had been no previous indication that the family was religious.

Jase’s and Mark’s relationship is…nice, I guess. Even though they break up early on and then get back together, as a couple they are pretty low-conflict. Mark pushes Jase a bit to let Candace stand on her own two feet, both for her benefit and for the sake of their relationship (since when she’s staying with them they frequently sleep all three to a bed, which is, let’s face it, weird).

But really most of the conflict is Jase’s internal one. I felt sympathy for it but it never quite came alive for me. I sort of wished it had been dug into deeper, but I’m not sure there *was* much depth there. Jase seemed like he was basically a young and somewhat immature, even shallow guy who had internalized some pretty macho and backward attitudes. At one point he laughs about Mark being “emasculated” by doing girly stuff with Candace (mud masks, etc.); I can’t tell you how much the very concept of “emasculation” infuriates me. It goes without saying that Mark is no less a man for painting his nails (which I guess he does to bond with Candace, but if he just wanted to paint them, that would have NOTHING TO DO WITH HIM BEING A MAN). Sorry, I just hate hate hate the word “emasculate” and variations thereof.

Since I bitched about it in Falling, I’ll mention that here in Freeing there is also some pretty stale gender stereotyping. When Jase and Mark go to visit Mark’s family for Thanksgiving, there’s lots of “the wimmins do the cooking while the mens put up Christmas lights.” It’s not a big deal, but it still bothers me; I’d like at some point to move beyond the same old “girls do x and boys do y” hoary clichés. Also, Mark’s 18-year-old twin sisters are depicted as giggly, boy-crazy featherbrains who won’t be allowed to go to a party (again, they’re 18) unless chaperoned by Mark and Jase.

I actually feel a little weird about evaluating the Jase/Mark relationship, and it goes back to my unease with m/m romance, as well as my unfamiliarity with it as a genre. I don’t really have any inside knowledge on such relationships IRL, of course, and I don’t assume that they have to be different in some fundamental way that m/f relationships. Actually, I think I feel uneasy assuming either way: if I say that it feels like Jase and Mark’s relationship could be m/f (with some small modifications, chiefly having to do with Jase’s ambivalence about his sexuality), is that a good thing or a bad thing? I would mostly say it’s a good thing, because really, what is so different about a same-sex loving relationship? But I wonder if it means that the depiction is somewhat watered down; both Jase and Mark are fairly conventionally macho (Jase particularly). They aren’t involved in “gay things” like the Pride parade, and they don’t appear to have any gay friends.

Should that bother me? I don’t know. I mean, I can see that I might be irritated if the author did shoehorn in Pride references and Judy Garland worship; that would feel cartoonish and disrespectful. Rather than compare Jase and Mark to the gay men I know (while I know quite a few, and they run the gamut, I don’t think they constitute a large enough sample size to serve as anything other than anecdotal examples) I think of them in contrast to Mitchell and Cameron from ABC’s Modern Family. Mitchell and Cam are uber-gay; they’re culturally and socially gay. Their friends (at least most of them) are gay. I know some people (including some gay men) who find them too broadly drawn. Which is fair, though Modern Family being a network sitcom, I’d argue that all of the characters are broadly drawn.

I guess what it comes down to for me is that most of my gay friends are closer to being Mitchell and Cam than Jase and Mark. Maybe this is because I, like Homer Simpson, “prefer my homosexuals flaming”? I don’t think so. Maybe it’s because the former couple is a lot closer to my age than the latter; generational differences could be a part of it. All I know is that if I’m going to read about a gay couple, I want them to feel like a gay couple to me, and Jase and Mark never quite did.

Ultimately, though, a lot of the issues that I’m talking about are probably at least semi-unique to me, and may well not affect other readers’ enjoyment of Freeing. I would say that if you’re a fan of the other two books in the series, it’s worth reading, if only to get a more complete picture of all of the main characters and what they are going through during the time period covered in the story. My grade for Freeing is a C+.

→ Jennie
Previous article: Daily Deals: Soft clouds of deliciousness, historical asses, and trained assassins
Next Post: Has everyone conceded the US ebook market to Amazon?