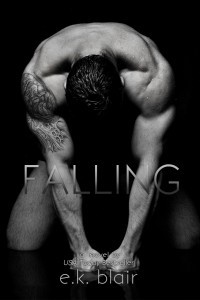 I read and reviewed the first book in this series, Fading last year. When I heard that there would be a sequel from Ryan’s POV, I was intrigued. I am a bit cynical about romance sequels that tell the same story over from the hero’s perspective, but having liked Fading so much, I was interested enough to want to know what was going on in Ryan’s head during the events in that book (particularly because the storyline had Ryan keeping a secret from Candace for the better part of Fading, albeit one that was pretty obvious to the reader).

The story opens with a prologue; Ryan Campbell is still a teen, and though he doesn’t know it yet it’s the last night of his despised father’s life. Ryan leaves a party where he has taken drugs and hooked up with a random girl and rushes home; he feels that it’s his responsibility to protect his mom from his abusive dad. When he arrives Ryan finds his father beating his mother; in the ensuing altercation, Ryan is actually stabbed and ends up in the emergency room. His drunken father flees in his car, drives into a tree and dies.

The story proper opens on Ryan in the present day – 28 years old and a successful club owner in Seattle. While his career is going great, Ryan’s personal life isn’t so hot – while he has given up his teenaged drug habit, he continues to engage in random hookups with women he doesn’t care about and has only superficial friendships. He’s only too aware of his fear that he might turn out like his father. It’s why, even though he’s close to his married cousin Tori and dotes on her children, he can’t imagine settling down and having kids of his own.

Ryan’s world is upended the night that he hears a woman screaming in the alley outside his club, long after it has closed. He rushes to the alley and finds a man assaulting a naked, bleeding woman. He fights off the attacker, who escapes, and calls 911. The victim is unconscious at this point; Ryan covers her with his shirt and waits for paramedics to arrive.

In the weeks after the attack, Ryan is shaken up by what he’s witnessed. It makes him rethink the meaninglessness he perceives in his own life. He even fears that he is similar in some ways to the rapist; after all, he just uses women. He finds himself halting a quickie with a pretty bartender when memories of the assault flash through his mind.

While he’s working his way through these feelings, Ryan meets Candace, who is working at a coffee shop he stops by one night (the Seattle setting is well represented – everyone drinks a LOT of coffee). He is struck by the barista’s superficial resemblance to the alley rape victim – both are small and brown-haired – but shakes off the eerie feeling, telling himself that it would be too much of a coincidence.

Ryan meets Candace again after he develops a friendship with Mark, whose band plays at Ryan’s club. Candace is best friends with Mark’s newish boyfriend, Jase. Ryan finds himself inexorably drawn to Candace, in spite of the fact that she’s very self-contained and even skittish.

From there, the two develop the same very slow, tentative relationship that readers of Fading will recognize. Honestly, the story is not hugely different as told from Ryan’s POV. The reader does get an insight into what Ryan is thinking during this slow semi-courtship, but none of the thoughts are radical or unexpected.

As he indicated in the previous book, Ryan only became aware that Candace *was* the same person as the alley rape victim when he recognizes the small heart tattoo on her hip. Which may or may not be credible; on the one hand, I understand that it seems like an unlikely coincidence. But on the other hand, so much about Candace – particularly her fear of intimacy and Jase and Mark’s repeated warnings to Ryan that she’s “been through a lot lately” – should spark Ryan’s memories of the initial connection he made between Candace and the rape victim. His inability to make that connection made very little sense. I finally had to put it down to a subconscious refusal to even think about the possibility on Ryan’s part.

Anyway, the discovery that Candace was raped causes Ryan, understandably, a lot of anguish. Not only the knowledge of the trauma that the woman he’s falling in love with has suffered, but his uncertainty about whether to tell Candace who *he* is, and that he was there in the alley. He feels stuck between a rock and a hard place – he knows he’s lying to her (if only by omission), but he also knows that telling her the truth will hurt her.

I could understand why Ryan was so unsure about what to do. It wasn’t like Candace was even remotely open about the rape; when she does eventually tell Ryan about it, he’s only the third person in her life (the other two being Jase and Mark) that knows.

I recall kvetching about Ryan’s attitude towards women in Fading, and it’s an issue for me here, too. Early on, before he meets Candace, he flip-flops between being not too bad, for a lothario, and really kind of ugly. On the one hand, he does show concern about the possibility of a casual hookup becoming too attached; he doesn’t want to lead anyone on. But at other times he characterizes the women he sleeps with as “ditching (their) self-respect”, which I think goes too far. He doesn’t know these women well enough to know why they are having sex with him (maybe they just want sex), so he really doesn’t need to be making moral judgments. He has some crappy, outdated ideas about women and sex that are never really examined, and I wish they had been.

I can often accept ugly attitudes better from a first-person perspective than a third-person one; even if it’s the same character’s POV, first person reinforces for me that it’s a flawed, fallible human being with baggage whose opinions we’re getting, and so I’m a little more forgiving. Third person feels more like the author is making those judgments, and that sometimes bugs me.

At times the stereotypified gender roles aggravated me. Ryan’s Thanksgiving with his family features the women cooking and the men watching football. Later the ladies excitedly get together to plan their Black Friday shopping. Ryan just shakes his head in amusement. Seriously? In any news coverage of Black Friday shoppers I’ve ever seen, men are just as prominently represented as women. But in the somewhat black-and-white world of gender roles in Fading, women just love to shop.

Also, Ryan does go on at length about how tiny and fragile Candace is. Now, this makes a certain amount of sense and is sort of relevant – Candace is a ballerina – but, still, I didn’t need to hear about it all the damn time. She’s small; I get it.

Though I was interested in Falling for the reasons I’ve already mentioned, I was also a little hesitant about reading the same story over from a different POV – might it be boring? I would say no, but honestly it did lag a bit in the middle. Once Ryan’s personality and thoughts are established, and the reader gets a sense of what he’s feeling at some of the key moments we’ve already read once in Fading (and again, there weren’t really any surprises there, not that there had to be), then there isn’t a lot to look forward to.

Events in Falling do extend beyond the ending of Fading, and that was both a good thing and a bad thing. It wrapped up Ryan and Candace’s romance with a definite HEA, and that was fine (there’s even a probably slightly-too-saccharine, kids-and-all epilogue). It showed us the development of Candace’s career, which was nice given that I had some reservations about the choices she made at the end of Fading. After feeling conscious, for much of the book, of the fact that we were treading familiar ground, it was nice to read new material. But it goes on for a bit too long and features what feels like several natural stopping points, only to continue on.

Ultimately, this was a satisfying companion piece to Fading, but not one that I think I just *had* to read. My grade for Falling is a B-.

→ Jennie
Previous article: Thursday News: BookCon at BEA, British Library exhibits comics, the OED of the future, will eBay and PayPal split, and Lil’ Kim gets sued
Next Post: REVIEW: The Only One Who Knows by L.A. Witt and Cat Grant