I have been drawn to New Adult books lately in spite of the fact that I haven’t had the best of luck with the ones I’ve read. I was immediately wary of this book when, not a page into the prologue, the male protagonist muses to himself (the narrative in Fading is entirely first person present tense) that he:

…really need(ed) to call Gina and tell her not to come over tonight. She’s starting to become so damn clingy. I can’t stand chicks like that. 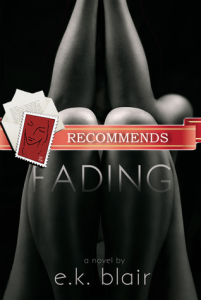 Oh, charming. I have read enough of these “heroes” in romance over the years; sure, they’ll bang a chick, but OMG if she develops icky feelings and wants a relationship. I don’t know which I hate more, heroes like this or the ones who seem to manage to find an endless stream of willing available women who “know the score” and don’t make any demands or have any expectations. The latter I find unrealistic, but at least they seem less like jerks than the former.

Anyway, our lothario’s internal monologue is soon interrupted when he hears a girl screaming in the alley outside his (closed) nightclub. He rushes to the scene and finds a man assaulting a woman; the assailant flees after a brief tussle and our hero calls 911. The scene ends.

Chapter One then opens with our heroine Candace (the rest of the story is told from her POV), getting ready for a date with Jack, a frat boy that she’s not entirely sure about. They both go to the University of Washington, but Candace, a dance major, stays away from the frat and party scenes and furthermore avoids the country club types her mother is always pushing on her (and Jack is one of those). To Candace’s surprise and confusion, she actually kind of likes Jack a bit after the date, and makes plans to see him again.

Candace is a senior who lives off-campus with her close friend, Kimber; they were freshmen dorm mates who hit it off, and have lived together ever since. Candace is generally pretty intense and focused on her dancing and doesn’t form a lot of close relationships; besides Kimber her best friend is Jase, who is gay.

The rest of this review might be a bit spoilerish for those who are sticklers about such things, though I’m mostly talking about things that either 1) happen early in the book or 2) seemed obvious to me as a reader even if they weren’t obvious to Candace from her limited perspective.

Candace is raped and beaten by Jack after a date gone horribly wrong; she’s found unconscious by the bar owner from the prologue and taken to the hospital. There, Candace is unwilling to tell anyone but Jase who assaulted her, and in fact once she’s released she goes to Jase’s apartment to recover from her injuries and refuses to communicate with Kimber about why she won’t come home. She is adamant that no one know what happened to her, and Jase supports her as best he can while clearly not agreeing with all of her decisions. Jase’s new boyfriend Mark also finds out about Candace’s assault, but keeps her secret and becomes a good friend to her.

It’s through Mark that Candace meets Ryan Campbell, a bar owner about seven years her senior (Mark’s band sometimes plays at Ryan’s bar). It’s clear to the reader, of course, that Ryan is the same person who found Candace after the assault, but Candace has no idea, and it’s not clear until late in the story whether Ryan recognizes Candace as the dirty, bloody, beaten and naked victim from the dark alleyway several months before.

Ryan pursues a friendship with Candace, going running with her in the mornings and encouraging her (as Jase and Mark constantly do) to come out and be more social. Candace could use friends; she has moved back in with Kimber but they are barely speaking to each other; Kimber can’t forgive Candace for disappearing for a week and being clearly dishonest about her whereabouts during that time. Candace enjoys Ryan’s company but is afraid to do more than go running, practice dance, attend class and go to her job at a local coffee shop, and honestly half of those things still scare her. She is terrified that she’ll run into Jack but remains utterly unwilling to consider pressing charges against him.

As if Candace doesn’t have enough on her plate, her long conflict with her parents (specifically with her mother) comes to a head on Christmas Eve, and she becomes permanently estranged from them. Candace ends up spending the holiday with Ryan and his family, and their relationship deepens. But Candace is understandably terrified of sex (her one experience prior to her rape was unsatisfying, to say the least) and pretty much in general just an emotional mess. She is barely holding her life together; she’s lost Kimber’s friendship and even her dancing has lost some of its power since she’s become very closed up emotionally. She’s hoping to get showcased in an important dance recital, one that could help her start her career with a prestigious company, but she needs to somehow break through the layers she’s wrapped protectively around herself since her attack.

Fading ended up working really well for me. I’ve luckily never experienced anything as traumatic as what Candace goes through, but from my perspective her reactions and feelings seem authentic. I found myself frustrated with her at times, with her unwillingness to be honest with the people who care about her, with her utter refusal to consider pressing charges against Jack, even going so far as to get mad at Jase when he suggests that Jack might do this to another girl if she doesn’t act. But her selfishness – and it did feel like selfishness to me at times – felt real, and ultimately understandable. She was of necessity in self-protective survival mode, and making it through each day was about all that she could handle.

I really, really loved Candace’s relationship with Jase. Too often the “gay best friend”  is a sassy cliche, but Jase is just an average guy who happens to be gay.  The intensity of his relationship with Candace and the degree to which Candace leans on him is realistically depicted – both the good and the bad. Eventually Candace realizes that she needs to stand on her own two feet and not always run to Jase when she’s upset, and that really feels like a breakthrough for her because we’ve seen exactly how much she’s been relying on him. It has also become, mildly, an issue for Ryan – he’s not an asshole about it, but he does wish Candace would turn to him rather than Jase when she needs someone.

Candace also has a good relationship with her boss at the coffee shop (though she shuts her out too, as the trauma of the rape continues to haunt her). She eventually develops a close friendship with Ryan’s mom, a caring and nurturing woman who’s had a difficult life. It’s clear that Candace is creating her own family to make up for the deficiencies in the family she was raised in, and I thought that was poignantly depicted.

Ryan is a great character – maybe a tad too idealized as the sensitive and endlessly patient boyfriend, but he is just what Candace needs, when she needs it. We learn enough about his background for me to forgive him for his heartless Lothario routine from the prologue. Not in any new or particularly fresh way, but because Ryan felt real and fully realized, his reasons for running from relationships prior to Candace felt real as well.

I believe there will be a sequel showing the events of Fading from Ryan’s point of view, and while I feel a faint distaste for this trend, in this case I will definitely read it because I’d like to get a better sense of Ryan and his thoughts.

The resolution with Jack felt a little disappointing – it seemed like a cop-out. I wanted Candace to really take control of her life and that’s not quite what happens here, at least in my view. She does end up taking control and making other choices that I was slightly ambivalent about, but it felt like she was making realistic choices to advance her own happiness – you can’t have everything.

I thought the book did a good job of setting the sense of place (Seattle) and of the experience of a college student about to graduate. I appreciated that, as I’ve found that a lot of the YA/NA books I’ve read don’t do that, and school is treated as an afterthought rather than the big part of the characters’ lives it would necessarily be.

Fading follows the pattern I’ve noticed with NA books of focusing on characters who undergo or have undergone a lot of trauma, but it worked much better for me than about 90% of the previous NA books I’ve read, due to strong writing and characterization. I look forward to further works from this author, and my grade is a B+.

→ Jennie
Previous article: Friday News: BN shares 10 biggest book spoilers; Calibre gets a competitor; Apple is trying to get into the TV business
Next Post: Sunita’s m/m reads for spring and summer 2013