I greatly enjoyed your YA historical novel, Flygirl, in which a young African American woman passes for white in order to join the Women’s Airforce Service Pilots (WASP) during World War II. I loved Ida Mae’s story, so when I saw that you had a new book out, a YA dystopian set in a future, hurricane-ravaged New Orleans, I couldn’t wait to read it. 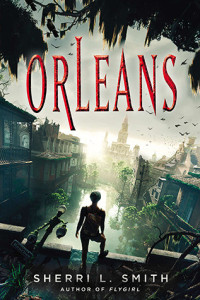 Orleans opens with a prologue set in September 14, 2004, in the POV of Edmund Broussard, a trumpet player who refuses to evacuate New Orleans for hurricane Ivan. The voice then shifts to an omniscient narrator who tells the reader that that New Orleans’ luck worsened after that.

Katrina is followed by hurricane Isaac in 2014, and then hurricanes Lorenzo (2015), Olga (2016), Laura and Paloma (both 2017). With each storm, the casualty count goes up and the survivor count goes down. In 2019 comes hurricane Jesus, which leaves only an estimated less than 10,000 survivors.

Among the ravages brought on by the hurricane is a new illness called Delta Fever, which leads FEMA and the CDC to issue a Declaration of Quarantine in 2020, sealing off the Gulf Coast region. Five years later comes a Declaration of Separation, in which US citizens “withdraw our governance of the affected states of Alabama, Florida, Georgia, Louisiana and Texas.”

Orleans then shifts forward thirty-one years to 2056, and we are introduced to Fen de la Guerre, a sixteen year old girl and a member of the O Positive tribe. Fen narrates her story in first person present tense narration in her tribal dialect.

In Fen’s city, now known simply as Orleans, Delta Fever has divided people by blood type. The disease manifests in such a way that those with the same blood type present no danger to each other, but associating with groups of other blood types can lead to contagion. Here’s an explanation of the dangers of this situation in Fen’s voice:

My tribe be O-Positive, or OP. And our chieftain, Lydia, don’t take kindly to the blood trade. O types don’t be needing transfusions like ABs do. The Fever be in us, but it ain’t eating O blood up from the inside like it do other types. So O types got to be extra careful of hunters and the farms where they be taking they kidnapped victims to drain them alive. O blood be the universal donor. If we give a drop, they be taking it all. Lydia say that ain’t right. Only ones worse off than us be O-Negs.

O positives and O negatives (two different tribes) are less susceptible to Delta Fever than most, and as the story begins, the two tribes have arranged a powwow which Lydia, Fen’s chieftain and surrogate mother, has asked for in an attempt to call a truce that she hopes will lead to cooperation between them.

Lydia is pregnant and due to give birth soon, and Fen worries about what will happen to her. She has acquired some bottled water and formula from a smuggler who sneaks in and out of the Delta as a present for Lydia, but wasn’t able to obtain blood in case Lydia suffers blood loss. Fen herself cannot donate blood to anyone, due to the burn scars along her arms, which, we learn from her thoughts, she gave herself.

On the night of the powwow, the O positives and O negatives are attacked by ABs, and most are slain. Lydia and Fen manage to get away but Lydia dies giving birth to her baby, a little girl. Before her death, Lydia asks Fen to ensure her baby has a better life, and Fen gives her promise.

Fen and the child she calls Baby Girl must go on the run, but they are now tribeless and vulnerable. To hide from the many predators in the Delta, one must be quick, agile, and silent, all things that are difficult to manage with a newborn.

Meanwhile, we are introduced to Daniel, a biological researcher from the Outer States and the book’s other protagonist. Unlike the sections in Fen’s POV, Daniel’s POV sections are narrated in third person past tense. Here’s a sample:

Daniel tried to remember the boy his brother Charlie had been before the Delta Fever set in. The happy kid with a snaggletooth and a love of banana-flavored candy, comic books, and surprisingly, movies about horses. Danny and Charlie. A nine-year age difference, yet somehow they’d still always been a team. Daniel had been off at school when the Fever swept through Charlie’s class.

Daniel’s brother Charlie dies of Delta Fever. His death leaves Daniel determined to find a cure for the illness, but in the process of trying to find that cure, Daniel creates a virus that turns on its host.

The DF virus, as Daniel calls his creation, could easily annihilate the remaining population of the Delta, and Daniel is afraid that’s exactly what the military will use it for if they discover his invention. So Daniel takes his vials of the virus with him and, wearing an encounter suit to protect him from Delta Fever, disguises himself as a leper and sneaks over the wall and into Orleans.

Daniel hopes to locate other scientists in the Delta, scientists who will give him the data he needs to complete his research and arrive at the cure. But once in Orleans, Daniel goes from one frying pan into another, and when he ends up in the fire, he meets Fen who comes to his rescue.

The two join forces, but will their alliance fall apart when Fen learns about the lethal virus Daniel created? Or will it hold long enough for Daniel to realize his goal and for Fen to keep her promise to Lydia?

As I said in my intro, I was really looking forward to Orleans and hoped I would enjoy it as much as I did Flygirl. Unfortunately, I didn’t.

My problems with this book began with the worldbuilding. I found it hard to believe that a quarantine like the one described would be recommended by the CDC in this age of plane flights. And while I could have bought the Declaration of Separation under other circumstances, I couldn’t believe that all it would require was the signature of the President, the Congress, and the former governors of the five states that made up the Delta. The last time some states tried to separate from the rest of the country, we had a civil war over it.

Then there was the way Delta Fever could transmit across blood type but not within it. I didn’t understand how something like that could work. If it’s possible, then there wasn’t much explanation of how in this book.

There were other inconsistencies, too. For example, the AB’s tribe is frequently said to be the strongest, even though AB’s are the most susceptible to Delta Fever of all the blood types. Perhaps this would make sense if AB was a common blood type, but it is the rarest of the four.

Even weaker than the worldbuilding was Daniel’s character. Daniel is described as a brilliant scientist, but he makes one boneheaded mistake after another. When he arrives in the Delta, he brings old, outdated maps but no GPS. He brings no internet connection and no other way of communicating with the outside world. His portable computer, called a datalink, is damaged by the humidity after three days in Orleans.

Daniel anticipates none of this, or anything else either. In fact his role in the story seems to be to make stupid mistakes so that Fen can come to his rescue. He never uses his brain to make one positive contribution. For a man who is said to be a genius, he is never even insightful or quick-thinking, much less clever.

At one point Fen think Daniel is “useless as a baby,” at another “If I be lucky, Daniel broke his neck,” and at a third “He crazy dumb.” All three times I agreed with her, and wondered why I should believe him capable of inventing a virus or care about such a character.

Fen was a far superior protagonist to Daniel (not that that’s saying much), and at times, she was pretty interesting. This was especially the case when the story delved into her unusual childhood. Her flashbacks were poignant and it was compelling to learn who her parents were, why Fen gave herself burn scars, and how she came to be with Lydia and her tribe.

Fen was also competent, managing to protect not only her own life but also those of Daniel and the baby. In fact, had the story been about Fen and one of her friends – Lydia or Kuan Jen, another character we meet along the way, and how they survive in Orleans, I think I could have found the book more absorbing. As it was, with Daniel in the mix, it took me over a month to finish reading it.

There are some evocative descriptions and strong metaphors woven throughout the book, but with weak worldbuilding and continuity errors distracting me and Daniel annoying me, it was hard to fully appreciate them. As I wind up this review, I can think of more things I found problematic, but this review is long enough that I think I’ll close here. My grade for Orleans is a C-.