REVIEW: Inquiry into Love and Death by Simone St. James

I didn’t read, although I always intended to, your first book The Haunting of Maddy Clare. Janine included it in a reading roundup. Janine commented that one of the stand out parts of the book was how atmospheric it is. I found the same to be true with An Inquiry into Love and Death. 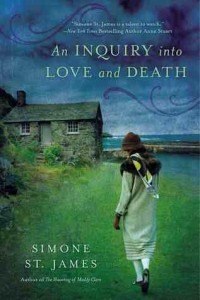 There are romance elements to this story and while I wished for something strong in terms of the romance it was enough to keep me entertained.

Jillian Leigh is an Oxford philosophy student whose uncle Toby just died. Her parents are off to Paris and are refusing to come home to identify the body and pack up Toby’s effects. Jillian is forced to travel to Devonshire at the start of her term term take care of the death business.

In the village of Rothwell, Jillian begins to suspect that her uncle’s death may not have been an accidental fall off the cliff. Jillian’s suspicions are fostered by ghosts, fires, and a strange assortment of neighbors.

This book was one part Scoobie Doo what with the quandary over whether the ghosts were real or manufactured to keep people away from Blood Moon Bay. One part was a gothic. Is someone trying to do harm to Jillian and is it the handsome Scotland Yard inspector Drew Merriken.

There are layers to the story. The ghost layer, the secret of the townspeople, her personal layer, the Scotland Yard layer. They are like vellum sheets, one on top the other. As you read, you slowly peel away each layer to reveal the truth underneath.

Jillian’s character was formed through a strange and conflicting source of empowerment and abandonment by her parents. They told her that she could do anything and she did, educated at Oxford. But they told her that, in part, perhaps because they were not going to be present to do things that ordinary parents would.

One of the more robust characters of the book was the village of Rothwell. While the cast was large, each character seemed distinct from overbearing Diana Kates with her cropped and marcelled hair covered by a variety of hats to Rachel Moorcock, the manager of the market store who has an unexpected suitor.

Altogether, though, this is a story of hauntings. Jillian can’t just pack up and leave everything. Her uncle’s work intrigues her. The village of Rothwell is a bit broken with so many of the men being killed in the war and the ones who returned are changed. There are children without fathers and spinsters who lost their fiancés. Drew, a former solider and Jillian’s love interest, is afraid of making connections with others, too afraid to start feeling again.

Jillian’s motivations are a little less clear. We know she is a curious and unconventional girl, brought up by an unconventional family but what she wants in the future, in a man, in a career, seems occluded. While most of the layers have a satisfactory conclusion, I wasn’t sure of the ghost storyline but maybe I wasn’t supposed to be.

For romance lovers, the romance comes on swift and while it ends hopeful, I think other romance fans might find it less than satisfying. Read it for the atmosphere and the mystery and not the romance. B-