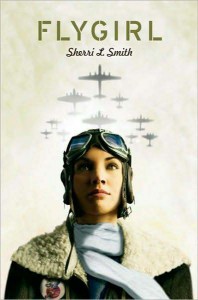 When I told some friends I was reading your YA novel, Flygirl, and what it was about, one of them directed me to this article at The New York Times. It’s about the awarding of Congressional Gold Medals to the Women Airforce Service Pilots (WASP), who provided the United States Army with their valuable flying skills during World War II, in order to free up male pilots to serve in the war.

To quote from your Author’s Note, “Flygirl is a fictionalized account based on the true story of the Women’s Airforce Service Pilots and their heroic feats.” It is also the story of Ida Mae Jones, a brave and determined young woman who is not willing to let anything, even her skin color, stand in the way of her dream of flying.

Flygirl begins in December of 1941, in Slidell, Lousiana, when Ida Mae, the narrator of the story, is eighteen. She and her friend Jolene clean for the Wilsons, a white family, and as they clean, they daydream. Jolene dreams of being a singer, though she doesn’t have the voice for it. Ida Mae’s heart’s desire is to become a pilot, something she already is in every regard but one.

When Ida Mae was a young girl, her father taught her to fly in his “Jenny” cropduster. Ida Mae later prepared hard for her pilot’s test, and performed beautifully when she took it. But her instructor, a white man who’d passed other black pilots at Tuskegee, told Ida Mae, “You can fly, no doubt about it. But no woman’s gonna get a license out of me. Go home, Miss Jones. You’ve failed.”

Now Ida Mae dreams of going to Chicago’s Coffey School of Aeronautics to obtain her license, and she is saving up to finance the trip. But when the Japanese attack Pearl Harbor, her dream is shelved. Ida’s brother, who is studying to become a doctor, enlists in the army. Before shipping out, Thomas asks Ida Mae to look after her widowed mother, her young brother Abel, and her grandfather, and Ida promises that she will.

A year and a half pass. Thomas is stationed in the South Pacific, where the war is going badly. Black families like the Joneses and white ones like the Wilsons ration sugar, coffee, and other staples. Jolene donates her silk stockings to the army parachute program. “Jenny,” the Joneses’ cropduster, remains in the barn collecting dust, since fuel is also rationed.

One day, Abel brings home a newspaper clipping from school. It is an article about the Women’s Airforce Service Pilots program, which will train women to fly military planes within America’s borders, freeing more male pilots to fight in combat. The instant Ida Mae reads about the WASP program, she desperately wants to be a part of it. Here is a way to realize her dream of flying, and to make a real difference in the war effort, to help Thomas in a more meaningful way than rationing sugar and stockings.

Jolene punctures Ida Mae’s ballooning hopes by telling her the program is almost certainly for white women only. For a brief moment, Ida Mae, whose skin is light enough that she could pass for white, considers pretending to be white in order to be able to fly for the military. It doesn’t take her long to realize that such an action is fraught with danger, though, and she tries to give up her dream.

But then Abel points out a picture of a Chinese American pilot who is a member of the WASP, and Ida begins to hope again. With Jolene’s help, Ida Mae forges a pilot’s license, applies to the program and is granted an interview. Just before that interview begins, she sees a black woman being refused entry to the program due her skin color alone. When the interviewer assumes that Ida Mae is white, Ida nearly backs out, but her dream of flying overcomes her fears, and she decides that she if she is accepted, she will join the training program for the WASP.

And so begins Ida Mae’s life as a military trainee pilot in Sweetwater, Texas, a life that is both thrilling and frightening. Even as Ida makes friends with fellow WASP aspirants Patsy Kake, who was part of a barnstorming show, and Lily Lowenstein, a sheltered and wealthy Jewish girl, she wonders whether these women would remain her friends if they knew that she is not white.

The training program is arduous — two out of every three girls wash out — but even more than the long hours of training, it is her deception that takes a toll on Ida, and her worry for her brother Thomas’s safety. Lily and Patsy’s friendship is a godsend, but in becoming part of their world, is Ida creating a gulf between herself and her childhood friend Jolene?

There is also a civilian instructor in the program, Walt Jenkins, who is clearly attracted to Ida and interested in her. Ida’s heart flutters whenever Walt is near. But Walt is white, and he does not know that Ida is black. How can she allow her attraction for him to show without misleading him? And even if she told him the truth, would a future with him mean leaving her family behind?

Flygirl is beautifully written and resonant. Ida Mae remains a sympathetic and believable character throughout the story. She is both courageous and unsure of herself, and I liked the way we see her mature over the course of the story. I also liked that I never felt the book was making a judgment about her choice to “pass.” Instead, we readers are invited to decide for ourselves what we think of her decision.

Ida Mae’s family members are vividly depicted, from her brothers, who respect and admire her, to her mother, who disapproves of her desire to fly, to her supportive grandfather, “Grandy.” Her friends, first Jolene and later Patsy and Lily, are a kind of second family to Ida. I especially liked Patsy, an independent free spirit who worked as a wing-walker in a barnstorming act before joining the WASP.

The romantic elements play a minor role in the novel — it is much more a coming of age story, and a story about how Ida deals with the discrimination she faces both as an African American and as a woman. It is also a book about friendships and family relationships, and their challenges and rewards. And, of course, it is the story of the brave, patriotic women who served their country for little recognition or compensation.

I have just a couple of complaints about this story. One is that Lily, who is Jewish, is depicted as having led a privileged life and is said to have “never known what it was like to be hobbled by somebody else’s rules.” As a Jewish woman, I have a problem with this depiction, because it doesn’t do justice to the prejudices Jews faced in this country in the 1940s. Sometime in the past couple or so years, I watched “The Jewish Americans” documentary on PBS, and I remember seeing that Jews, too, were turned away from many establishments during the 1940s. I find it hard to believe that even after two years of serving in the WASP in several parts of the country, Lily would not have encountered much prejudice.

My other problem was more minor: a moment of annoyance at something Ida did that constituted cheating on one of her tests in my eyes. But since she felt bad about it and did her best to make up for it, I got over that.

One of the things I loved best about this book was the way the 1940s came alive. I truly felt I had been transported there, and was reminded of films from this time period when I read the book. It’s not an era that I often see in novels, so it was a treat to be immersed in it here.

I also enjoyed your writing style very much. Ida Mae’s first person present tense narration was confiding and immediate. There are memorable turns of phrase like this description of a female pilot who gets some bad news: “Melanie looks at me and her face crumples like a newspaper, only all the headlines are sad.”

As I was reading, I felt I was in the sure hands of a capable author. I experienced both sadness and happiness with Ida Mae, and would recommend Flygirl not just to young adults but also to adults who want to learn more about the first women to fly for the U.S. army, or to experience this young woman’s journey. B+/A-.