REVIEW: The Conquest of Lady Cassandra by Madeline Hunter

During this book I had a little Hunter epiphany.  I’ve really struggled with the past few books, but the quality of your writing has not declined but my response to the books have not been as enthusiastic as they used to be.  And on the surface, all your books should appeal to me because they are largely about the power struggle between men and women during periods of time when women had little agency.  My revelation during this book was that you do such a great job highlighting the near jeopardy that an unmarried woman without funds of her own are subject to that even the slightest male aggression feels like predation. 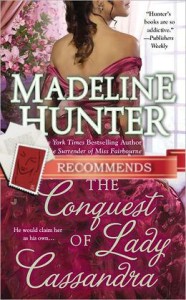 Cassandra was discovered alone with a man who had a spotless reputation.  He quickly offered his hand in marriage to her but Cassandra refused.  She did not want to marry him and with the support of her eccentric Aunt, Cassandra was able to refuse.  After she turned down her suitor, he was killed in a duel which many presume to be over Cassandra.  As a result, Cassandra has lived under the spector of scandal.  She is is often treated like chum for the marauding males. They don’t need feel the need to use company words or light flirtations with someone whose past is even slightly suspect.  It’s as if one step off the straight and narrow and you might as well be in the gutter.

Yates Elliston, Viscount Ambury and heir to the Earl of Highburton, was a good friend of the man that Cassandra rebuffed.  He’s always been attracted to Cassandra and hated himself for it. He blames her for his friend’s death and assumes, like everyone else, she is loose.  Ambury is forced to deal with her at the request of his dying father.  Cassandra’s aunt Sophie has some jewelry that belongs to the Highburton family.  Ambury has been charged to find out more about the provenance of the jewelry; specifically how it came into Cassandra’s hands.

The search for jewelry reveals a complicated web of secrets that forces both Ambury and Cassandra to look at their family members with new eyes.  Cassandra also has to deal with her aunt’s frequent memory loss and the fact that her brother is trying to force their aunt into an asylum.  Cassandra needs to sell enough of the jewelry so that she can make a new home for herself and Aunt Sophie.

One of the more interesting aspects of the book is Cassandra’s refusal to marry the man who compromised her and how that affected her life.   When Ambury questions why she didn’t marry the man who ruined her reputation. Cassandra tells him that she did not want him. Aubry doesn’t listen to her but continues on blathering about how it could have made such a difference for her and she wouldn’t have had to resort to selling off her aunt’s jewelry.

“I. Did. Not. Want. Him,” she enunciated slowly, angry now. No one seemed to care about this part of it. No one ever had. “As for his love and his intentions, there is much you do not know. Now that he is gone, no one knows except me.”

He cocked his head, suddenly curious. Too curious. She cursed herself for allowing him to draw her into this.

That passage resonated.  For many, her wants weren’t sufficient excuse.   I’ve been guilty of thinking this too often when reading historicals especially. If a heroine is placed in desperate circumstances (as they often are in a Hunter book), I wonder why they don’t make the more pragmatic action. If there isn’t a more clear delineation of power than a man getting to choose and a woman being judged for making a choice, I don’t know what is.

The secrets are somewhat predictable but perhaps only because there are only so many outcomes in these circumstances.  I had a lot of admiration for Cassandra who withstood the gossip and tried to enjoy her life following her downfall in society. She maintained her dignity and her sense of self, regardless of what happened.   That she ultimately found a greater measure of security and happiness with Ambury was satisfying.  We knew that it only happened because she wanted it to. B