REVIEW: Heart of the Dragon’s Realm by Karalynn Lee

“Princess Kimri is used to betrayal. Her brother sold her to a king in exchange for swords to defend his lands. King Tathan’s reputation is as fierce as that of his mountain kingdom–where dragons are said to guard the castle walls–but the realms are unstable enough without angering the mountain-king, so Kimri reluctantly agrees to the union.

When she arrives in Helsmont, the king promises her a year of courtship before marrying–or parting ways. Before long, Kimri thinks she may find comfort, and perhaps eventually love, with the stoic king.

But the realms are more unsettled than Kimri realizes, and she soon finds herself caught in the middle of a war between the kingdoms. Can she count on her betrothed to take her side? Or will his loyalty to his kingdom come before his loyalty to her?”

I think this novella suffers from being either too long or too short. If it had concentrated more on a few things and told them well, I would have been more satisfied. Or if it had been expanded enough to cover the many threads better, that would have worked too. As it is, there is too much that is attempted with only a few things that I found completely done. 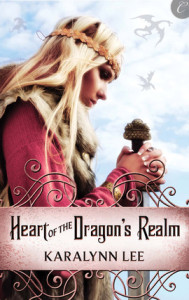 The story and heroine have a “Warprize” feel. Kimri has been bartered off by her brother – so she thinks – in an arranged marriage with the legendary king of a mountainous neighboring kingdom. Bitter at her fate, Kimri leaves her brother and homeland and begins her journey to her new life. Once there, she discovers that Tathan, the King, isn’t a bad man and might even be someone she could come to like. Kimri also appreciates the country’s custom of a year long engagement and is relieved to discover that if she finds the place and the man don’t suit her, she won’t be held to the betrothal.

And so begins her discovery of her new country. Kimri finds the freedom allowed her here to wander at will and the lack of courtly ceremony to be refreshing. She always felt constrained in her homeland but learns that in Helsmont women can achieve much more – even becoming soldiers. Together with the Prince of a neighboring hostile land who was captured trying to kidnap Kimri during her initial journey, she gets to know the people of her new homeland and their different customs.This is the aspect of the book that worked best for me. I especially enjoyed her lessons in the native “sword dancing.” Kimri also matures a bit as she realizes that when she becomes Queen, she’ll have much more power and responsibilities than she would have had in any of the lowland countries including her birth place.

“But where’s the romance?” I wondered. Tathan is off here, there and everywhere but near Kimri until past the halfway point of the story. The enemy Prince is with Kimri more than her betrothed which lead me to question whom she’d end up with. Then just as the Kimri and Tathan get closer and I’m thinking I’m going to see their relationship shown, the third act begins and they’re separated. My doubts of the hero’s i.d. reared up again and my frustration increased. The final pairing isn’t a sure thing until way too late for me.

When Tathan’s POV never appeared, I knew there was something that was supposed to be hidden about him – something I kinda guessed anyway. The secret isn’t that hard to figure out but then only adds to the “why wasn’t this developed more” feel I was left with. Kimri certainly takes to it without a whole lot of questions.

The world building is interesting, Kimri’s journey towards maturity is well developed but the lack of emphasis on the romance and the confusion I felt as to the hero’s ultimate identity make this one a mixed grade that evens out to a C- grade.