REVIEW: True to the Law by Jo Goodman

I love your books.  I particularly love the slow way that they unfold, like a scroll unfurling as you toss it down a long set of red carpeted steps and then slowly wind it back up as you read each word and each sentence. Your books are for savoring.  Alas.  True to the Law took some time for me to get into.   The first twenty five percent of the book read almost too slow, like my hand was broken and I could only roll the scroll up one jerky twist at a time and then I got frustrated and threw the scroll on the ground and stomped around a little. 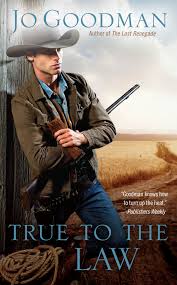 I’m not sure if it was my previous expectations that led to such a weird interaction with the book or whether the execution was just wonky. After the first twenty five percent of very slow setup which spent far too long on showing us how adorable two random kids are, the schoolteacher in her robe is snogging with the stranger who dissed her earlier that evening in the hotel restaurant.

Let’s back up here. Cobb Bridger has been hired by Richard Mackey to find Tru Morrow who used to be the companion to Richard’s grandmother. Richard implies that Tru has taken something extremely valuable. Cobb isn’t sure he really trusts Mackey but he’s intrigued by the job and sets out to locate her. He finds her teaching school in Bitter Springs, Wyoming.

Cobb comes to Bitter Springs with some subterfuge (not unlike the last book) and Tru takes to him immediately.  They begin a flirtation that raises the eyebrows of the townsfolk and Cobb is warned off.  Instead of having dinner with Tru, at her invitation, he stops by Tru’s house later that evening. She greets him at the door in her robe. She invites him in and after a semi witty repartee filled with allusions, they start kissing like they are long lost lovers. It was weird.

He continues to creep into her house at all hours and, at one point, actually carries her into the parlor, sets her down on the sofa while she is in her nightgown and then wonders whether he should close the drapes.  She’s a single schoolteacher. I just have a hard time believing she could cavort in a small town with a man in her house after midnight and in her nightgown with neither of them even one whit concerned about her reputation.  Were things that different in 1889 Wyoming?

The other thing I didn’t love in this book is that Cobb is out to investigate Tru. Sure he becomes more interested in proving her innocence than finding her guilty, but I really disliked that he courted her under false pretenses.  It seemed unsavory to me.  The plot involves the mystery of Tru’s connection to the Mackeys and what exactly Andrew Mackey wants with Tru as well as Cobb becoming integrated into the Bitter Springs community.  Conveniently the town is looking for a marshal.

I really love Goodman books and I’ve loved the previous Westerns. I’m not sure what happened in this book but it felt unnatural from the romantic arc to the individual scenes themselves.  I felt awkward and uncomfortable during the love scenes and frustrated at the power that Cobb held in the relationship, a dynamic that I usually don’t associate with a Goodman book.

While the writing is, as always, quite nice, the storyline didn’t work for me and neither did the characters.  What a bummer.  C