“Yan Ling tries hard to be servile–it’s what’s expected of a girl of her class. Being intelligent and strong-minded, she finds it a constant battle.

Proud Fei Long is unimpressed by her spirit–until he realizes she’s the answer to his problems. He has to deliver the emperor a “princess.” In two months can he train a tea girl to pass as a noblewoman?

Yet it’s hard to teach good etiquette when all Fei Long wants to do is break it, by taking this tea girl for his own….”

Some my favorite movies use the “Pygmalion” theme so I was psyched to see a Tang Dynasty version of it. I love how you’ve transplanted it to China and appropriated the heqin marriages as a springboard for the plot. Yan Ling is a tea shop girl instead of a flower girl and ultimately doesn’t need to pass herself off as a Duchess at an Embassy Ball – she needs to become a grand Lady in order to be accepted as a Princess. Fei Long isn’t an irascible language teacher but a man desperate to salvage the family honor which demands that a sister be delivered to become a foreign bride. Still there are hints of Eliza Doolittle learning to speak and walk with a book on her head. Yan Ling must master her sleeves and her posture. She’s got to lose the dialect in her speech and try to learn to write. I also wondered how on earth she’d master learning to write and read Chinese in such a short amount of time but the ultimate goal revealed by Fei Long, and the way this is used to reveal how his feelings grow for her from an early stage, make sense. 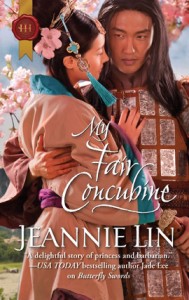 Fei Long’s so focused and dutiful – in what he demands of himself as the only son of his father and also as master of the Chang family and servants. What’s expected of him by others adds another layer and after that is his sense of duty to provide for Yan now that she’s under his protection in his house. Then there are the boundaries he keeps between himself and any hint of taking advantage of women not of his class in society. Oh, and there’s also what will be demanded of Yan in her substitute place as the family daughter who is supposed to be a marriage alliance bride for the empire. Fei Long’s got a lot of obstacles in his path to his HEA.

And it takes a woman like Yan Ling to ultimately shatter his rigid control. From their first meeting she shows that she won’t let herself be thought of as nothing. She does know her place in society but she won’t let herself be disrespected. She’s aware that the opportunity presented to her is more than she ever dared to hope for – a woman of position who will never again worry about her place in a household, her source of food or clothes, or how much work she has to do in order to be allowed to stay. The wolf isn’t going to howl at her door anymore. But the longer her training goes on, the more she feels the Chang household is her home and that the people there are her family. The price she’ll have to pay for her new life, she discovers, is going to be steep.

Yan Ling challenges Fei Long without being the dreaded feisty romance heroine. She needles him to accept the changes in her. She makes him see that she’s not an humble tea girl, a squashed bean bun on the road of life, an insignificant female any longer. The training has reinvented her and awakened the true woman inside of her. She’s becoming Fei Long’s consort battleship. She puts him in his place, refuses to let him see her as lesser than he is – in short she shows him her new found strength of self.

But then what? Yan and Fei Long know, individually, that they’re falling in love – though you hide Fei’s true feelings for a bit longer, but how can they resolve their love with the duty demanded of him and the promise she’s made? Loss of respect in the city and the chance for advancement in the Imperial household will doom the Chang family to ignominy and thus endanger the entire household. How can Fei Long allow that of servants who have been in their employ for generations? How can Yan reduce the people she’s come to love to being pieced out to other households or being as hungry as she once was? Her sense of duty to the Chang name and people is growing day by day. The answer was staring everyone in the face the whole time yet while my mind was furiously debating if Fei Long and Yan would run or stay, it never crossed my mind. It’s an elegantly simple solution and I’m smacking myself that I never thought of it.

Yan and Fei Long are good for each other. She loosens him up and gets him to laugh again as well as want to confide in her while he shakes up her practical side a little. He’s the first one to recognize her audaciousness and then see it as a strength. She’s got as strong a personality as he does and probably won’t let him get away with shit.

I enjoyed the secondary characters too. Spirited Dao, irreverent Li Bai Shen with a tiny hint of Jackie Chan?, devoted Old Man Liang – they flesh out the story with believability, humor and love. Fei Long might feel himself bound to take care of them but they also take care of or stand by him when he needs it.

The wealth of detail included in the story is staggering when I look back after finishing the book: everyday things and great important things. There is enough explanation for what is needed to be in the book but the stuff doesn’t stagnate into an info dump. After doing a little internet investigation, I can also see why you have chosen the Tang Dynasty for the setting of your stories so far. There are a few things I’m curious about. Why are Yan Ling and Fei Long’s names not translated whereas Pearl’s is? What is the name of the evil money lender? It showed up on my Sony as Z?u. What is the 10 suns archery contest? What kind of game is xiangqi? Are the names of the gardens and nunnery historical or from your imagination? I’m still not sure I entirely understand why Lady Min leaving the household for a nunnery would cast the Chang family into shame. Because they would be thought to not be taking care of the household members? Unable to afford her upkeep? Casting her off? What exactly was the role of a concubine in this age? More like a mistress? Or a second wife?

This is the first full length story of yours I’ve read and I enjoyed it very much. I hope Yan Ling regains the sense of curiosity and wonder that Fei Long discovers he enjoys so much in her and that she keeps him from getting into too much trouble with Li Bai. B

→ Jayne
Previous article: REVIEW: Rock and a Hard Place by Jane Davitt,Alexa Snow
Next Post: Something is very wrong with us, and it’s not bad reviews