REVIEW: A City of Broken Glass by Rebecca Cantrell

Due to the nature of the plots of this series, spoilers in the reviews are unavoidable.

Each summer I eagerly look forward to the newest installment of this series. So far Hannah Vogel has ducked and dodged her way through the increasing tension and rising tide of National Socialism of 1930s Germany, all while trying to get the word out about what is really going on in her homeland vs the idealized version served up by the Nazis. In “A City of Broken Glass,” the year is 1938 and despite her best efforts to avoid trouble, Hannah is up to her eyeballs in it again. 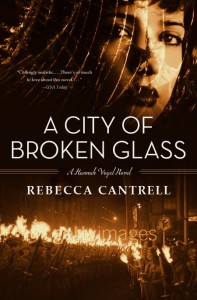 Hannah has lived in Switzerland for the past four years working as a reporter. Lately, someone’s been sending hate mail to her which her editor feels is the result of the political pieces Hannah’s been writing. Sent to Poland for what should have been an easy, fluff piece, Hannah and her nephew/adopted son Anton can’t avoid the latest efforts of the Nazis to rid Germany of Jews. They stumble across Jewish refugees who have been rounded up and forced across the border between the two countries. Never one to back down from a story, Hannah forces her hired driver to stop at a barn where some are being held and goes in to interview them. There she discovers the heavily pregnant Polish wife of her longtime friend Paul – himself half Jewish. Paul is nowhere to be found among the refugees and a desperate Miriam extracts a promise from Hannah to find her two year old daughter whom Miriam left in their apartment before being dragged away.

That evening trouble arrives at the inn where Hannah and Anton are staying. First Lars Lang, a former SS officer with whom Hannah did undercover work and who she last saw two years ago as he left for an investigative trip to Russia, suddenly turns up. Then two Gestapo officers arrive and drag Hannah away to take her back to Germany where she’s wanted for murder. Only her determination not to die at the hands of the Gestapo and Lars’s quick thinking get her away but now she’s too badly injured for the hours long trip back across the Polish border. Plus she needs to stay in Berlin to determine what happened to little Ruth and why Paul wasn’t with his family.

Shocked at how badly the Jews are now being openly treated, Hannah and Lars begin their search, always mindful that anyone who knows them could turn them in and, without proper papers and due to Hannah’s past actions, if that happens their fate would be grim. Where is Paul? Who took Ruth from the apartment? And if they can find her and see her to safety, can Hannah and Anton be smuggled across the border back to Switzerland before there are any reprisals for the death of Ernst vom Rath?

Each book in this series has been grounded in historical events and often uses one in particular to drive the action or overshadow the plot. Here the deportation of some Jews to Poland in late October, 1938 kicks off the action leading Hannah and Anton back into Germany while the horror of Kristallnacht sees them fleeing Berlin. With everything that happened in those years, you have an abundance of events to work with. After the way Hannah’s cover was blown at the end of “A Game of Lies,” I wondered what might induce or force her to return to Berlin given the fact that she knows the Nazis would relish the chance to get their hands on her. Once again, Hannah gets injured – though thankfully not to the extent that occurred in “Game.” Her strong sense of duty and humanity to the wife and daughter of her old friend do the rest. One thing Hannah’s friends, and even mere acquaintances, can count on is that her sense of right and wrong will propel her into any situation no matter how hazardous. Something poor Lars seems to finally have accepted about his lady love.

This time, Anton is with Hannah and it’s nice to see him growing up and showing signs of the man he will become. Lars tactfully handles Anton’s burgeoning sense of manly duty to take care of his mother and allows Anton his fair share of responsibility. Indeed, the situation might have been lost without Anton’s quick thinking on more than one occasion. Yet, glimmers of the child he still is appear every now and then such as when they visit an orphanage and Anton is reminded of what could have been his fate had Hannah not adopted him. I also found it touching that Lars asks for Anton’s permission while proposing to Hannah.

This might be a difficult series to read as romances. The men who have been Hannah’s love interests have changed dramatically as individuals over the course of the four books. They’ve also changed from one man to another which can be a deal breaker for a lot of romance readers. I never thought I’d be cheering for the man she’s with now but you’ve managed to make him one of the most complex people in the cast of characters – even if you also seem to take delight in seeing him get beat up. Hannah only suffers a broken arm in this book but poor Lars has been put through the wringer both during the intervening years and over the course of the book. At one point I think it’s Hannah who muses about how in the past few years, most of the men in her life have faced danger because of her. Lars better make sure his life insurance is paid up. Still I find that this is probably the most romantic book in the series.

As in the previous books, there is almost nonstop action for most the story. Yet somehow, there seemed to be less tension in this one. I kept waiting for the other shoe to drop and the SS or Gestapo to actually menace our trio but after the initial confrontation that leads them out of Poland and back to Germany, this doesn’t happen. I didn’t miss Hannah, Anton and Lars actually being in the hands of their enemies but a few near misses could have heightened the suspense. One of the other things I’ve enjoyed in the books is the wide and varied group of people and journalistic contacts Hannah knows in Berlin. Sadly I guess it’s inevitable that in the six years of the story arc, some of them will no longer be there due to death and, especially, immigration. However, they, and the color they added, are missed.

The longer a series continues, the more I worry that it will start to falter. As I begin each book, I find I have my mental fingers crossed. Will it still be as good as the past books without turning into “same old, same old?” Or will I finish it with the sad realization that the time to part ways has arrived? So far for me, your books are still going strong and with the final year before the war looming, there’s no lack of possible things for Hannah, Lars and Anton to get involved in and be menaced by. I’ll wait patiently for next year to see what happens next. B-