Many readers have fallen in love with your Divergent series. This YA series is set in a dystopian society divided into five factions by personality: Abnegation, Amity, Candor, Dauntless, and Erudite. The first book chronicled Tris Prior’s transfer from Abnegation to Dauntless and was a riveting read. 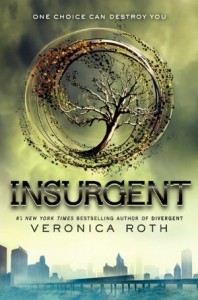 I myself adored Divergent, at least the first 80% of it, so much so that I gave the book a B+/A- grade. Unfortunately, I felt the sequel, Insurgent, was a different kettle of halibut. Since I’m pressed for time, I’ll borrow the plot summary from Jia’s B review, which offers a more enthusiastic perspective than my own.

Insurgent picks up immediately after the events of Divergent. The balance of power between the five factions has shifted with two, Erudite and Dauntless, forming an alliance to attack Abnegation. Tris, Four, and their companions have fled, seeking safety from the two remaining factions — first Amity, and then Candor.

Safety, unfortunately, is difficult to find. Though Tris and Four are part of Dauntless, they are known to be Divergents: people who exhibit traits from more than one faction. This makes them walking targets because Erudite would want nothing more than to get their hands on them. After all, it’s a problem when your mind control drugs fail to work on a growing segment of the population. If Erudite can perfect the drugs’ effect on a Divergent mind, then their control will be absolute.

Left with no other choice, Tris and her friends must ally themselves with people from Four’s past. But the repercussions of those newly forged relationships may have consequences that are far more reaching that anyone could have expected.

My response to Insurgent seems to have been different from that of the majority of its readers. I was disappointed to find that toughness and competitiveness, two of the traits I liked best in Tris when I read Divergent, were largely absent from her portrayal in Insurgent.

Tris is struggling with having killed her friend Will at the end of the previous book, which is understandable and commendable, but her inability to even hold a gun rendered her more vulnerable here than she’d been in the earlier book. Vulnerable heroines are a dime a dozen, and it was Tris’s edge that made her so fascinating to me, so I wished she hadn’t been softened quite so much. (I was also disappointed that even by the end of the book, Tris did not express her regrets personally and privately to Will’s loved ones.)

Since she’d spent much of Divergent learning to get tougher during her initiation into the Dauntless faction, it also felt like her character was regressing, rather than continuing to grow, and that sense of backsliding was frustrating.

Also frustrating was the discord between Tris and Four/Tobias, because it felt contrived. I understood why guilt and shame led Tris to keep the fact that she’d killed her friend Will a secret from Tobias, but I thought this went on a little too long. When Tris finally revealed the truth, Tobias was pretty self-absorbed and insensitive which seemed out of character with the way he’d been portrayed in Divergent.

Then that conflict was abruptly dropped and the bone of contention between Tris and Tobias morphed from her failure to trust him to her (according to Tobias) recklessly and needlessly risking her life.

With the exception of one major act of self-sacrifice on Tris’s behalf, which seemed senseless, I could not see Tobias’s point of view. Yes, Tris risked her life repeatedly, but that was almost always for a purpose and except in the one case I mentioned, which came after Tobias’s complaints of her recklessness, her behavior didn’t seem reckless to me.

Maybe because I couldn’t buy into these conflicts, I also noticed some ridiculous implausibilities in the plot. Here are a few examples:

Dauntless is supposed to be the faction that guards everyone else in this society, but they get totally taken by surprise during an attack on a tall building they occupy and guard. Wouldn’t they think to post sentries?

During that attack, Tris forgets that she has a knife in her pocket. After she killed Will in self-defense and therefore now can’t even hold a gun, I’m intended to believe that she doesn’t think about whether or not to defend herself with that knife? If anything, the knife should be burning a hole in her pocket, but instead, she suddenly remembers she has it after forgetting its existence.

In a later scene, it’s mentioned that Erudite doesn’t have access to the truth serum Candor uses. It is stated that the reason is that the Erudite don’t know how to make it. Erudite doesn’t know how to make truth serum? Did Candor develop it without their help? When Erudite has all the knowledge in the society and when it’s specifically mentioned that Erudite developed Dauntless’s simulation serum?

Then there’s the continuity error with Tris’s gun. In the scenes leading to the book’s climactic moments, Tris’s gun changes from a stunner to a gun and back and forth again. Tris also crosses from one building to another and points that same gun at someone in a washroom — only to realize in the next scene that she doesn’t have a gun, because she left it at the previous building (before the washroom scene).

There were some good things about Insurgent. I appreciated the fast pace as well as the simple, direct style of narration, and I thought that there were some nice emotional moments. I liked the guilt Tris felt with regard to Will’s death and the way that impacted her actions. I liked Tris seeing a familiar face under a simulation, a betrayal from an unexpected source, and a surprising rescue. I also liked the moment when Tris realized that despite her losses and her guilt, she wanted to live.

On the whole though, Insurgent was a frustrating book for me. I really wanted to share the enthusiasm so many others have for it, but I have to give it a C- grade.