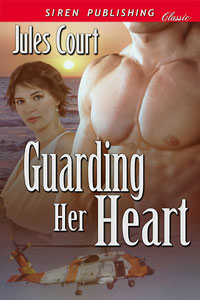 Six months ago, Tiffany Donnelly, failed musician turned diner waitress, was left just shy of the altar when her groom ran off with a bridesmaid. Now, verbally sparring with sexy Coast Guard rescue swimmer Travis Green is one of her few pleasures. In his dark eyes, there’s no pity for poor, jilted Tiffany. Nevertheless, he’s in her “look but don’t touch” category.
Travis Green, loud-mouthed Southern boy of mixed Hawaiian, Japanese, and white heritage, is usually the outsider. But now, he’s got a group of friends that just happens to contain Tiffany, the woman he can’t keep his dirty thoughts off of. However, innocent flirting is where he draws the line.

When Tiffany’s ex-bridesmaid begs Tiffany to attend her wedding—to Tiffany’s ex-groom, Tiffany’s pride gets the best of her. Suddenly, she’s introducing Travis as her new boyfriend. During their weekend posing as a couple, the lines between fantasy and reality blur.

Can passion once unleashed be contained?

Yes, I was looking for this follow up to “Rescuing Love”. I thought you did a good job in that one to introduce the next romance without it seeming too much like the dreaded sequel baiting. Tiffany’s failed wedding was a subplot of that book and here she gets her chance at a HEA.

As the book starts, I was a bit nervous. Six months after being jilted, here’s Tiffany out on a blind date with a loser and being rescued by Travis before learning the happy news that her best friend, and heroine of the last book, has finally said yes to her hero’s proposal. Oh noes, I thought, please don’t let this turn into a Poor Tiffany book. Things took another hit when Tiffany gets maneuvered into agreeing to go to her ex-fiancé’s (aka The Jilter) wedding. Only Travis’s buoyant enthusiasm in entering into Tiffany’s face-saving claim that he’s her boyfriend and “yes, they’ll both attend the Perfect Vermont Posh Wedding,” kept me from groaning.

Travis truly has never met a stranger and manages to say what he really feels while calling people out on their bullshit with a smile on his face. While romance heroes acting as fake boyfriends is a common trope, usually the hero needs to somehow be roped into it. Travis grabs the situation by the balls and delights in it. He’s having fun here while helping this woman who everyone knows he has feelings for get her self esteem back. I love this guy.

As he tells Tiffany, he’s got her six as they wade into the cutesy – yet oh so posh – wedding at the quaint inn that sets his teeth on edge. Whether it’s facing down the snob who questions his heritage or speculating with Tiffany during the ceremony as to what 90s Hair Band song should be her signature pole dance number – that really goes over better when it’s read than when I try to describe it – he’s not going to let anyone get either of them down.

It’s at this point that the hot sexing starts. Honestly I’m surprised they didn’t keep the entire inn awake. The hot sexing continues as these two keep stumbling around their relationship. Is it a booty calling or something more? Travis keeps telling Tiffany to hold out in the long run for what she deserves and that she deserves a man who will give her everything. As she realizes that she truly is over The Jilter, more and more it seems that Travis might be The One. But he’s got some confidence issues about Tiffany to address as well since love has finally made him vulnerable.

I have to admit that I found Travis’s self doubts a little hard to believe. He’s good looking, has a steady job, is nice to his sisters, kind to strangers and friends and is great in bed. Since the series is a paean to the working class and The Jilter + his world are generally portrayed as snobs, Travis’s concerns about his economic potential as a boyfriend didn’t really seem like deal breakers to me.

Given the shorter length of the novel, the plot manipulation to finally get Travis and Tiffany on the same relationship page was a little clunky but I will give bonus points for having it include seeing Travis in action as a Coast Guard rescue swimmer. I also like that while Travis helped Tiffany over her self esteem issues, she also got him to reach for what he wanted in a relationship as well. Now that the Becca and Alex’s Vegas, Baby! wedding is done, I have my fingers crossed as to which couple is next on the list. B