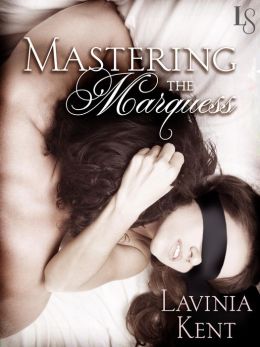 This was a book I listed on my daily deals list. The premise intrigued me. Two strangers have an explosive sexual encounter and then meet each other in the ballrooms, not knowing their past but fall for each other anyway.

That’s not exactly how the story unfurls. Louisa, Lady Brookingston, married her childhood sweetheart. But her husband John came home from the war damaged and never consummated their marriage. Louisa tried hard to understand what her husband needed from her and was willing to go to any lengths to please him, including following him to a brothel and confronting the madam. But her actions netted her no results. John died, leaving Louisa a virgin. Because she wants to remarry but does not want to bring shame on his name, she revisits the brothel and makes an unusual request of the madam to arrange for Louisa to have dispose of her virginity.

The madam takes the request to Geoffrey, the Marquess of Swanston, a man who enjoys domination, bondage, and light sadism. (He wields the whip.) Geoffrey is so good at hiding his so called perversions that his family believes him to be a nearly monk-like. His father even hired a prostitute to devirginize the hero at the ripe age of thirty. Geoffrey has had to be the responsible one because his entire family is filled with spendthrifts, including his father.

The first third of the book is the one night between Geoffrey and Louisa disguised and masked.  That it takes them a while to discover that they knew each other didn’t actually bother me. It was part of the conceit of the story that I bought into. It was their other decisions that left me scratching my head.

After Louisa’s experience with Geoffrey, that she agreed to marriage with an impoverished man whose courtship was colder than a winter in the Highlands seemed odd. I understood why Geoffrey pursued her, but his courtship was so dull that had I not known that these two had a prior fabulous encounter, I’d have been worried for Louisa. Even the explanation that Louisa gave–that she looked forward to seeing him–was thin because we just never saw any chemistry between the two out of the bedroom.

Louisa was singular in that she had no friends, no extended family members, no support network.  I think she could have used at least one friend. For most of the book, she really did not exist outside the bedroom. Geoffrey had the issue of his family which saved him from being one dimensional but I wanted to know more about Louisa other than that she was a virgin and that she didn’t quite know if she wanted to be whipped in the bedroom.

“Open your legs. Yes, just like that. You glisten in even this dim light…My cock weeps for you.”

The story never picked up for me. The third and final act focused on the villainess’ attempt to seduce Louisa and Geoffrey’s sister into an abusive sexual relationship. I was a little taken aback at extent of the dark turn that the story took in the last third. For those who have triggers, they may want to be aware.

Louisa is kidnapped and then there are three chapters devoted to her sexual assault at the hands of the villainess who decides to take out her anger at Geoffrey on Louisa.
I didn’t understand the need for the extended scene of torture. And the resolution was decidedly unsatisfactory.

If not for act 3, I’d probably have given the book a C, but the suspense portion of the story was not only unexpected but seemed gratuitous. I didn’t understand the point of that part of the story. D