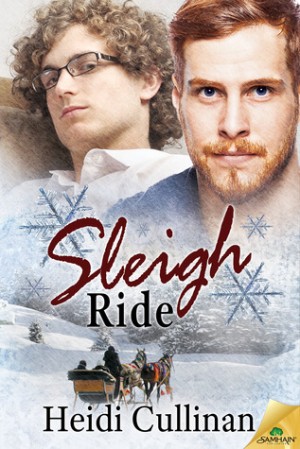 I reviewed Let it Snow, the first of your Minnesota Christmas novels here last year and liked it quite a bit so I was happy to get a chance to read Sleigh Ride.  Arthur Anderson’s character was introduced in the earlier book – Marcus was staying at his cabin.  Arthur and his best friend Paul share the cabin and are fuck buddies but not boyfriends.  At the start of Sleigh Ride, we are told that Paul eventually gave Arthur an ultimatum – make it official or he was out.  Arthur just didn’t see Paul that way so Paul moved out and Arthur is now in the cabin alone.  Arthur’s mother is particularly concerned about her son’s single state.  Corrina is always trying to matchmake – sometimes with hilarious results:

There had been one horrible moment when he’d caught Corrina trying to log in to Grindr— heaven help Arthur if she’d actually found his profile.

While Arthur thinks he’s not cut out for relationships, Corrina is certain that’s not the case and she is relentless in her quest.  Gabriel Higgins is the Logan librarian.  He’s almost the physical opposite of Arthur – tall and lanky with springy curly hair in a riot around his head as opposed to Arthur who is compact, muscular, red-headed and beardy.  They have three things in common at the beginning of the book: they’re both gay, both convinced they don’t need or want a relationship and Corrina is determined to fix them up.

Corrina is on the library board and part of her thinking (though not a large part) is that if Gabriel puts down relationship roots in the town, he will be more likely to stay.  He is a very talented skilled librarian who took a pay cut to come to Logan.  While Gabriel is passionate about small community libraries, he is regularly courted by other, larger libraries and Corrina doesn’t want to lose him.  Since Gabriel has been in charge of the Logan library, it has been revived as a community hub, with DVDs, books, comics, storytime and internet access.  Much of Gabriel’s wages are paid via a grant which is soon to end, so funding for the library is also a big deal.  Corrina comes up with a grand plan to have a sleigh ride to raise money – Arthur will be Santa and Gabriel will be his elf helper.

Both Arthur and Gabriel are horrified by the prospect but the juggernaut that is Corrina is impossible to stop.

Arthur and Gabriel each know of the other’s existence but neither has a high opinion of the other.  Arthur is not a reader and the library is one of his least favourite places to be.  Gabriel thinks Arthur is uncouth and rude.  Nevertheless, when Arthur goes to Gabriel’s house to talk to him about other funding opportunities for the library (in an attempt to get out of the sleigh ride) they end up having hot dirty sex on the couch.  Arthur likes it kinky and, to his surprise and shame, so does Gabriel.

My biggest criticism of the book is that the romance is extremely quick.  Gabriel and Arthur go from active dislike to lovers in the blink of an eye and the transition from one to the other was faster than light.  Even while I was enjoying the scene on the couch, part of my brain was trying to catch up with just how they’d managed to get there. There follows a bit of stop/start where Arthur is freaked out to find himself wanting a relationship after all and Gabriel is feeling ashamed of his own desires and desperately vulnerable – both misinterpret the other’s behaviour.  Again, this was very fast in terms of the developing romance.  One encounter – big fight; one date – bigger fight and relatively long separation; the feelings the guys were dealing with and their reactions to them felt like they belonged better in a more established relationship.  Even when they work those initial bumps out, things progress very quickly.  The entire book takes place in about three months.  The romance is VERY fast.

Part of me was worrying over the speed of all the action but most of me was just enjoying the story.  I’m not a huge fan of instalove but I must say the book itself largely won me over in spite of it.  It does have the feel of a small town contemporary and with the Christmas backdrop there is a bit of fairytale to it as well, so I suppose that makes the speedy romance a bit easier to deal with.

I’m a very vanilla girl but I don’t mind reading about the kinky sex.  When I first started reading it, I admit I didn’t really get it.  I could appreciate it on one level but there was another that just didn’t understand.  As I’ve continued to read, I’ve gradually come to a better understanding.  It seems every now and then a book will say something in a particular way which will click something into place and I have a clearer picture of what makes this so attractive, even necessary, to some people.  In Sleigh Ride the “click” for me was this:

The counting took him out of that floating head space even as it pushed him deeper. As if on his own he’d been drifting through ether but with Arthur he was on a guide rope moving with deliberation toward some unknown treasure.

The book dips into the didactic from time to time – about kink, and about books and libraries.  There is a subplot about Thomas, Arthur’s five year old nephew who has a doll but isn’t allowed to take his doll out in public because his mother is ashamed of it.  While I liked the story about William’s Doll and how Thomas’s mother came to understand that her own prejudices were shaming her son, I felt at times that the book was trying too hard to teach the reader and not the fictional library visitors. I’m going to be a hypocrite here and say that sometimes it felt paternal and unnecessary and other times it was kind of helpful.  I suspect how people will react to those aspects will depend on where each reader is at. Some  will feel “duh, I know that already” and others may have a bit of a light bulb moment.  I did think it was a little obvious and heavy-handed at times but there wasn’t anything in the statements themselves I objected to.

In some respects, the book is a love letter to librarians and to books. It kind of made me want to go hug my local librarian and tell her or him how much they are appreciated.

Every book is a revolution. Books are our ticket out of boredom, despair, loneliness— but also ignorance.

As a book lover, this resonated with me.  I can’t even tell you the things I have learned from reading even what appears to be innocuous fiction.  Even when I thought the book was being too obvious about its message, I couldn’t help but agree.  I suspect however, that it will be preaching to a choir of readers.  Nevertheless, as much as Gabriel sometimes came across as a superhero librarian and too good to be true, I think I’d like very much to visit the Logan library and sit in on storytime.

I liked how Gabriel re-introduced Arthur to comics and graphic novels and Arthur discovered a previously unknown love of reading. I really liked how Paul was not excluded from the story and how those bonds of friendship were appreciated by all of Arthur’s circle.  I enjoyed the sweet vibe between Arthur and Gabriel as well as the chemistry between them. While they initially appeared to have little in common, they fit together very well. Yeah, maybe it was a little too perfect but hey, it’s a Christmas story. Sometimes it’s nice to have things wrapped up with bows.

Sleigh Ride is a sexy and sweet small town contemporary queer romance – warm-hearted and with a sentiment suited to the holiday theme.  I give it a B.