REVIEW and GIVEAWAY: The Shadowy Horses by Susanna Kearsley

“With its dark legends and passionate history, the windswept shores of Scotland are an archaeologist’s dream. Verity Grey is thrilled by the challenge of uncovering an ancient Roman campsite in a small village. But as soon as she arrives, she can sense danger in the air.

Her eccentric boss is convinced he’s finally found the resting place of the lost Ninth Legion – not because of any scientific evidence but because a local boy has “seen” a Roman soldier walking in the fields. Surprisingly Verity believes in the boy, and even in the ghostly Sentinel, who seems determined to become her protector…but from what?”

I had never read any of your novels before so was unsure of your writing style. In fact, I hadn’t even read any of our reviews here because I didn’t want to prejudge or have expectations for when I eventually – and I just KNEW that one day I would – tried one of your books. The experience was fantastic and I’m glad I already have a list of titles to go back and sample. Since I can’t just do a review that says, “What Sunita said in her three reviews.” here goes my effort.

Within the first chapter, I was already thinking “Mary Stewart style” and a glance at authors to whom you’ve been compared confirms I’m not the only one. I adore Stewart’s contemporary era books with her practical, sensible heroines. And what better, more evocative Stewart-ish heroine name could there be besides Verity? Which of course also goes well with Roman theme of book. There are lots of truths to be discovered here. Is there actually something buried to be unearthed and identified at the dig site? Was it a Roman marching camp or another sort of settlement that would rule out the presence of the legendary Ninth Legion? Can the group believe in what Robbie says? And who is behind several little problems that have occurred on the site? 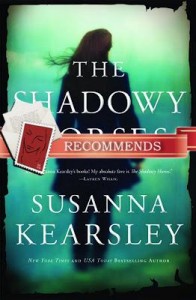 I’m endlessly fascinated with archeology and the quest to know more about our past regardless of where in the world the dig may be. But like Verity, I want to know not only what artifacts were left where but more about the people behind them. I’m afraid once I discovered that young Robbie might be able to communicate with the dead Roman sentry, I would have been sorely tempted to ask him to convey messages and impressions too. Just think of what you could ask someone who lived 1800 years ago!

Peter is someone I pictured as being like Peter O’Toole – charming, forceful, gentlemanly, and yes eccentric in that effortless aristocratic way who could also nicely manipulate an army into doing whatever he wanted and have them actually excited over the prospect. But all the characters here came to life for me. Even the ones only briefly in the action were captured with succinct precision that told me everything I needed to know. I also loved the old Scottish house where you have to be introduced to the (no doubt) eccentric plumbing. There’s such a wonderful sense of atmosphere, especially in Quinnell’s ground floor retreat with its dark paint, comfortable, cracked old leather sofas and two cats draped over the lot.

The paranormal aspect of the book might be a deal breaker or off putting to some readers. Early in the book, this begins to be gently introduced, so that I had already started to buy into the Sentinel before he finally, truly shows up. Little bits and pieces of the picture have been included in earlier scenes, hints that get the reader to think about it, gradually accept it and, when it finally arrives, you believe – totally. It’s like you’ve been gently lead down a path and it’s all you can do. It’s natural by then. At first it is eerie and a bit hair raising to think about someone actually being a Sentinel, watching all the time. That is until his true nature emerges at which point he becomes something of a friend. And after all, the dog has liked him from the start.

The writing is smooth and effortless. Descriptive but not overwrought. Sometimes an excess of adjectives can be worse than too little. This is not the case here and it was a delight to just sit down and enjoy the process of reading, already knowing I was in good hands.

I could see the lovely potential romance because Verity knows the truth about archeology – it’s not usually fedoras and whips and wild trips through danger in exotic and remote locations racing for gold idols. It’s a science, it’s dedication, it’s hard work and it sounds like David, in fact. Okay, that sort of makes him sound a bit stodgy but he’s not. He’s such a solid, all around good guy who can be counted on for whatever needs doing. I am not a fan of mental lusting and feel it it is too intrusive and takes up far too much space in a lot of books. I don’t mind a closed bedroom door if the strength of attachment has already been established. The romance here gets time and space to warm up and since I totally believe Davy and Verity’s growing feelings for each other, I am confident that they burned up the sheets just fine without me being there.

Beyond the mystery of the archaeological dig – what might be found there, how the situation could be explained historically – there’s another one that is woven through the story but it’s very unobtrusive. Almost too unobtrusive as there were times it almost completely faded into the background. Still the clues are there so when it finally comes out into the open, it’s more an “ah, yes, of course” rather than a WTF? Again, it’s very in keeping with this style of mystery, with danger being present but not a modern, vicious danger that would spoil the reading. A serial killer just wouldn’t fit the feel of this story.

So a smooth, descriptive style, characters who breathe on the page, attention paid to the details of the action and the characters’ professions, a little humor, an intense growing love, a willingness on my part to believe the paranormal, they all lead to a great reading experience. Plus new Scots words to add to my vocabulary! It’s an all around win. B+