REVIEW: Reflected In You by Sylvia Day

Part of my response to this book is in direct correlation with my biggest fear for the book – that the conflict between Eva and Gideon would be unnaturally extended as we worked our way through to the end of the trilogy. Fortunately that did not happen. If anything, I wondered if Eva and Gideon’s issues could be resolved with only one more book to go. 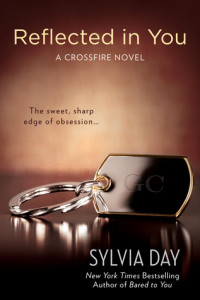 I’m not sure if you could start with Reflected in You and I don’t think you would want to. Bared to You  lays important ground work for the two main protagonists.

Eva and Gideon are two very screwed up individuals. Eva has been in therapy for years to recover from abuse from her step brother. Gideon has night terrors that cause him to attack Eva in her sleep, nearly raping her. Their relationship is neither tender nor sweet. It’s volatile and crazy with huge swings of emotion.

There isn’t necessarily a plot in Reflected because this is a character driven, relationship driven story.  They both want the same thing – to be together.  However, neither of them have been in healthy relationships and thus have no past experience from which to draw.  They go to therapy together but tell the therapist that the only thing that is off the table is for the two of them to stop seeing each other.   Problematically, their behavior (mostly Gideon’s) prevents the two from achieving stability.

Gideon is secretive and possessive. He wants Eva at his side every second of the day. Eva is straining at his possession because she feels part of her past problems have been related to being subsumed by emotion and acting out in negative ways. The story begins with Eva and her best friend heading for Vegas. Gideon doesn’t want her to go but compromises if Eva stays in a property owned by him.

When she arrives, she discovers that Gideon has not only arranged for her stay but also her companions in the form of one female bodyguard that intervenes when Eva is engaged in a harmless flirtation with a guy at the hotel pool bar. Eva then arranges for Gideon to have his very own bodyguard which he accepts with some chagrin. I think this scene typifies Eva and Gideon’s relationship. Gideon takes liberties with Eva’s life and Eva retaliates. It’s unhealthy but that *is* the book. It tells the story of two dysfunctional people and their very unhealthy relationship.

This isn’t one a story about two people who love each other and communicate well. This is a story of two people who have love each other madly, endure wild emotional swings but for all their neuroses and troubled mental states, I do feel like they belong together. The story is unapologetic about the insanity of their relationship. But their chemistry is a visceral thing. Their need and desire for each other is tangible.

Of the two, I felt that Eva had achieved some peace in her own mind and she was far more proactive in this book. She dealt with the demons of her molester, in part.  She stood up to another woman who she felt was threatening her relationship with Gideon.  She even learns ways of managing Gideon to some extent.  Gideon, however, is more screwed up than ever if that is even possible.  It’s a messy love story and I’m happy to watching from the sidelines.

[spoiler]The ending is shocking in my opinion and takes a vigilante turn that I did not expect. This will not and probably should not sit well with people and you have to wonder how these two will turn the corner. However, I admit that the build up to the final scene worried me in that I wondered what lame excuse Gideon would come up with for his actions toward Eva (which included neglect, lies and possible straying). The excuse wasn’t lame at all and so in that respect I felt relieved. It was an emotional ride for me.[/spoiler]