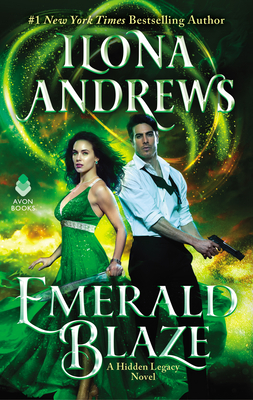 Spoiler Alert: Hidden Legacy series spoilers follow. I’m avoiding spoilers for Emerald Blaze but it’s not possible to talk about this book without mentioning spoilers from previous books in the series.

Sapphire Flames made my best books of 2019 list so, like most people I know in Romancelandia, I was extremely happy to get my hands on Emerald Blaze. Unfortunately I made a mistake and read it without refreshing myself first by re-reading the first book. It’s been a long time since I read it and my memory of the plot was a little hazy. Emerald Blaze can’t be read as a stand alone. The series, including the first trilogy really needs to be read together as a whole (I include the novella, Diamond Fire in that too.) The world building is dense and unique, the cast large and the plot complex. For those without an eidetic memory, I recommend at least re-reading Sapphire Flames before diving in to Emerald Blaze to get the most out of it. That’s what I plan to do in the not too distant future. As it was, I spent a lot of the first half of this book catching up. I don’t blame the book for that (and it is not reflected in my grade);  that is on me. I think I may have missed some things, or misunderstood the significance of some things in the earlier part of the book because I was going through my dusty mental archive to put the pieces together.  I haven’t forgotten the main players of course but I felt like any nuance in the first part of the book may have been lost on me this time round.

By way of brief recap: at the end of Sapphire Flames, Catalina, who had previously taken over House Baylor, was Deputy Warden of the State of Texas, reporting to Warden Linus Duncan. Linus has sworn her to secrecy – she can’t even tell her family, on pain of death (theirs). She also fell headlong into love with Alessandro Sagredo, the gorgeous Italian Antistasi Prime who helped her solve the Etterson case. But, for reasons he would not explain, Alessandro left her and she was bereft. And, Catalina has made a deal with Victoria Tremaine, for information and to protect her family, that she will never leave House Baylor for any reason. She believes means she will never be able to have a long term romantic partner.  When Emerald Blaze begins, six months have passed. Catalina has put herself back together as best she can but she’s still hurt over Alessandro leaving. She’s mainly channeling that into anger as a means of self-preservation. She’s also very busy with running Baylor Investigations and taking on Warden assignments from Linus.

The story starts with a set piece about recovering a stolen service monkey and quickly morphs into a a new Warden case that Linus assigns to Catalina as a matter of urgency.  Right away the trademark Andrews humour comes out to play.

Rosebud pulled on his hair and trilled at me for emphasis, clearly ready to do battle.

Well, we had a pint-size battle monkey on our side. This case was as good as solved.

The new case involves the brutal murder of Felix Morton, a Prime and a businessman who, as part of a conglomerate of five Houses, were trying to reclaim the Pit (ie, where we met Bug way back in Burn for Me.) The circumstances indicate the murderer is one of the other conglomerate members. There is a link somehow to the stolen Osiris serum, which is why it is Warden business. Lander Morton, Felix’s father, a wealthy and crotchety old man who is bent on revenge, has hired Alessandro the Artisan to kill the person or persons responsible for Felix’s death. Not only is Alessandro back in town, it looks like they’re going to be working together. Catalina is just thrilled.

Catalina is determined not to get caught up in Alessandro’s spell again. She doesn’t think she could survive a second heartbreak from him. Even so, she’s philosophical to her family about what happened six months earlier.

“I broke my own heart, Leon. He was just the hammer I hit it with.”

It’s clear that something profound happened to Alessandro in the six months he’s been away. He’s changed. He’s open and willing to answer questions. He’s direct about his feelings and there’s less of the snarky banter/foreplay – he’s basically all in from the beginning but he doesn’t think he has much of a chance to rekindle their romance.  He will take what he can get and if that’s just making sure she keeps breathing, then that’s what he’ll do. He knows there’s a hit out on Catalina and now he has to convince her to let him help.

“I’ll kill anyone who tries to end your life. I’ll answer any question you ask. I’ll pay any price to keep you alive. Let me protect you.”

The entire story takes place over only a very few days and the action has few lulls. The beats and tone of this book are very different from the first. Sapphire Flames set up the romance, showed the courtship and the developing feelings and generally took a little more time. Emerald Blaze brings the pair back together but there is no “rediscovery”. There is no journey to forgiveness – it’s more a teleport. They move very quickly from broken up to back together. There are some heart to heart conversations in between and lots and lots of action and danger but within three or so days, the book is done. (That’s not a complaint. Merely an observation. I actually liked the way the books are different. ) Alessandro does make an epic romantic speech later in the book which made my heart happy but this book alone contains only a small part of the overall romantic arc. What is has is critical – the importance of the HFN/HEA cannot be overstated after all, but the lead up to it is mostly in book one.

I really enjoy how the protagonists of this trilogy are distinctly different to Nevada and Rogan. It may be blasphemous but I still like Alessandro better.

One of the things which was a bit vague in Sapphire Flames was exactly how and why Nevada left House Baylor and officially joined House Rogan, a move which elevated Catalina to Head of the House. The mystery is resolved in this book. I was glad to understand that context but I can’t say that I loved reading about it. This is where the references to sexual violence and human trafficking come into play. You do not normally go there. I can’t recall anything like it in the Kate Daniels series or the Edge books or the earlier Hidden Legacy books. It felt all the more shocking because of that. I understood the purpose it served in the story but it made me uncomfortable nonetheless and I did find it somewhat jarring.

Emerald Blaze has lots of scary and truly creepy plant/metal/human hybrid monsters  and an unfortunate number of spider-like creatures (I can always do without them), plenty of action, tension and drama. The wider Baylor family have small but critical roles to play, as do favourites like Bug, Cornelius and Runa. Most of the focus is squarely on Catalina and Alessandro. I thought the method of keeping Nevada and Rogan out of the action was perfect.

I am very curious about one character who was introduced in this book. I am having a debate with a friend about whether he might be a love interest for Arabella but she is convinced it’s not him but someone else with neck tattoos. But I do like a man who can walk on water. We’ll see in due course I guess.

Like the first trilogy, book one does not end happily from a romance perspective but book two does. No doubt book three (I’m betting a ruby for the title) will continue the same style (I hope it does anyway) – the romance will not be threatened but the pair will have to face a major conflict together. I am so here for it. But next time, I’m going to do a series re-read before I start, to make sure I don’t miss a thing.