REVIEW: The Undertaking of Hart and Mercy by Megan Bannen 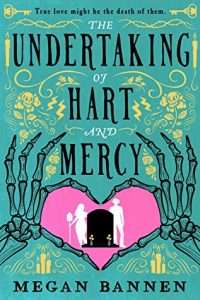 Mercy Birdsall is an undertaker in Bushong, one of the Federated Islands of Cadmus. Hart Ralston is a Tanrian Marshal, tasked with patrolling Tanria (bear with, me I’ll get to it) to kill “drudges”.

If that seems confusing, well, at first, it is, a bit. The story drops you straight into it and explains things along the way. I admit that it took me a while to get my bearings. It was never enough to make me frustrated or want to stop reading, but it was a bit disorienting. But I’m going to help DA readers out a little by giving some explanation which may help going in, without giving away spoilers. (Or, at least, that’s the plan!)

Tanria is a kind of magical no-man’s land created by the “New Gods” to contain the “Old Gods”. There are official portals into Tanria but there are also pirate portals and smugglers use them to get things from Tanria such as silkwool which they can sell on the islands for a lot of money. In Tanria one can get attacked by a drudge –

“No one knows what they are or where they came from. All we know is that if someone dies on Tanrian soil, they can be infected by some sort of spirit and reanimated. Most people think they’re lost souls since they infect the appendix, but since souls are invisible, there’s no way to know for sure.”

Sometimes, happily only rarely, drudges manage to escape Tanria and cause havoc in places like Bushong. The towns have regular “drudge drills” where everyone has to stay still so that anyone moving is more easily targeted as a drudge and can therefore be disposed of.

As per the quote above, in this universe, souls reside in the appendix and to kill a reanimated corpse, it is necessary to pierce the appendix.

In this universe, people have “keys” which are effectively pre-paid funeral packages and when someone dies, their keys are referenced and the body is taken to the relevant funeral home. Many of the infected are “keyless” and can be taken to any undertaker who has an agreement with the government to provide services via the Indigent Processing Grant. In Bushong, there are two: Birdsall & Son and Cunningham’s.  Cunningham’s is much bigger and slicker, corporate and impersonal and they have more branches. Birdsall & Son is a small family-run business, personal and sympathetic.

Six months earlier, Roy Birdsall had a heart attack and Mercy stepped out of the office and took over the undertaking. The plan was for her younger brother Zeddie (the “& Son”) to complete his undertaker training and take over and then she would go back to the office. Mercy’s sister, Lilian, is married to Danny, who does deliveries for Birdsall & Sons.

Marshal Hart Ralston is solitary, grumpy and lonely. His mentor, Bill, was killed when Hart was 19. He’s 35 now and he’s been largely alone ever since.

Hart has to take cadavers to undertakers and necessarily that means he needs to go to Birdsall & Son sometimes. Four years earlier, he’d first walked in and met Mercy. It did not go well. They have sniped at each other ever since. He calls her Merciless and she calls him Hart-ache.

“I guess you’re still alive, then,” she said flatly.

Leonard, who could not contain his joy, jumped up to paw Hart’s stomach, and Hart couldn’t help but squeeze those sweet jowls in his hands. What a shame that such a great dog belonged to the worst of all undertaking office managers.

“Are you here to pet my dog, or do you actually have a body to drop off?”

A shot of cold humiliation zinged through Hart’s veins, but he’d never let her see it. He held up his hands as if Mercy were leveling a pistol crossbow at his head, and declared with mock innocence, “I stopped by for a cup of tea. Is this a bad time?”

“Leonard, get down.” Mercy nabbed her dog by the collar to drag him upstairs to her apartment. Hart could hear him scratching at the door and whining piteously behind the wood. It was monstrous of Mercy to deprive both Hart and her dog of each other’s company. Typical.

Of course, Hart is actually very attracted to Mercy. This is very inconvenient. Mercy, for her part, notices that Hart is attractive but given his animus towards her she hasn’t really gone beyond that.

One day, Hart, lonely and alone, writes a letter to “a friend”. He posts it thinking it will just be discarded by the “nimkilim” (these are anthropomorphic animals who were formally the messengers of the gods, relegated to delivering mail). Hart’s nimkilim is Bassareus, a grumpy, alcoholic rabbit. (Mercy’s nimkilim is Horatio, a prim and proper owl.) Instead, because magic, the letter ends up with Mercy and thus begins a correspondence between them, friend to friend.

Mercy has a lot on her plate; Zeddie isn’t keen on being an undertaker, the business is in trouble and suddenly she’s fending off problems left, right and centre. The letters are something just for her in a world where she’s the one who’s always doing for others and takes very little for herself.

Neither Hart nor Mercy know exactly to whom they’re writing and while this correspondence is taking place, their back and forth sniping continues. It’s true that the whole thing was really Hart’s fault in the first place but Mercy can be very cutting and she takes no prisoners in some of the things she says. I’m not usually a fan of enemies to lovers romance but it worked for me here. I can’t really put my finger on why. Both Hart and Mercy are mean to each other and usually that’s the thing I don’t like. I still didn’t like it – but not because I thought less of them, more because I was seeing the impact of these verbal blows to the other person and how much they were hurt. But I’m unable to articulate why I didn’t mind it here. Perhaps it was the fantasy setting. Perhaps it’s just one of those rare events, like a solar eclipse.

While the romance blooms via mail, there is a noticeable uptick in drudge attacks and Hart faces a number of other challenges. He is inspired by his “friend” to start opening up to those around him and it’s painful because it opens old wounds.

But things come to a head when Mercy asks to meet her friend.

Hart clutched the letter and thought, What the fuck. If he didn’t have any human beings to confide in, he might as well pour his heart out to a nimkilim. There was nothing to lose here, because Bassareus wasn’t a part of his life.

Hart held up the letter. “My friend wants to meet.”

“No. What if she doesn’t like me in real life? I’m not exactly Mr. Warm and Fuzzy. Even you can’t stand me, and you’re an asshole.”

Bassareus preened, slicking back his ears. “Thank you very much.”

I don’t think I’ll go into the plot more than that – there’s plenty I’ve left out but I don’t want to spoil the story for anyone. There are great swaths of things I’ve not covered because there’s just too much to go into – including a secondary romance and a delightful relationship between Hart and one Penrose Duckers which changes Hart almost as much as his relationship with Mercy, although it is not romantic in nature.

The worldbuilding is complicated and clearly bigger than what is in the book. Even though I had no idea what was what a lot of the time, especially in the early parts of the story, it’s clear to me that you did and that helped immeasurably. I did get a little bit confused about things sometimes – I had a bit of a disconnect with things which are the same in the real world and the universe of the book (for instance use of condoms). Sometimes it felt both familiar and unfamiliar at the same time which is kind of jarring. Not bad just, a little disorienting I guess you’d say.

I loved the romance and the way Hart and Mercy found their way to one another. I was a little confused about the big conflict which arises between them – at the least I thought Mercy owed Hart an apology too – but romantically speaking I was very happy with things by the end.

I don’t want to give the game away but I did think it strange the way the drudge subplot played out. I expected something and it didn’t happen. I’ll put a little more (but not much) detail behind a spoiler tag, just in case.

I expected Mercy and Hart to work together.

However, the entire book was unique and fresh and interesting and there were so many good things about it that my small quibbles were not very significant.

Grade: B+ and a definite recommend for those who enjoy fantasy romance.