REVIEW: In Case You Missed It by Lindsey Kelk 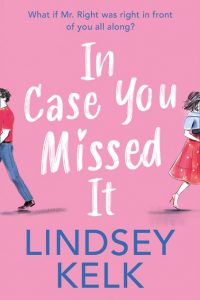 When Ros steps off a plane after four years away she’s in need of a job, a flat and a phone that actually works. And, possibly, her old life back. Because everyone at home has moved on, her parents have reignited their sex life, she’s sleeping in a converted shed and she’s got a bad case of nostalgia for the way things were.

Then her new phone begins to ping with messages from people she thought were deleted for good. Including one number she knows off by heart: her ex’s.

I used to adore Chick-lit books with British heroines as they introduced me to tons of British slang, idioms, and habits (In this case it’s learning about middle aged British gents bickering over barbecued sausages). Then these books started to be much of a muchness plus often the heroines got put through impossible to believe wringers as well as usually having tons of humiliating things done to them. Finally I stopped reading them. But from this blurb, it sounded like Ros and her situation might be a new and improved version of what I used to enjoy. With that hope, I requested it to review.

Jetlagged Ros has just got back home to Britain after three years of a dream job in America to discover that her middle aged parents are trying to restart the spark in their sex lives so she will be living in a shed at the bottom of their garden. But at least her friends are all still there. Setting up her new phone, she takes the easy way out and just texts a group message to everyone in her contact cloud that she’s back. One person she didn’t expect to send a reply is her old boyfriend – aka The One. Their breakup wasn’t good but Patrick seems eager to take up their relationship again.

One person who warns Ros about him honestly (hilariously referring to the teapot’s “tale as old as time”) has no right to as he’s never met Patrick and Ros thinks John is a rude twat. OK, she was in the men’s room of the pub where John works as a bartender but only because she was desperate for a wee. Their meeting was Not Cute. John’s years behind the bar have given him a lot of experience reading people and watching the shite things they do and he has a few home truths to give Ros. She, of course, doesn’t want or believe them.

As she settles into a new job that might or might not be a nightmare, depending on how the podcast with her first client goes, Ros tries, for reasons she won’t reveal, to recreate the life she left three years ago. The problem is that it’s not three years ago and things have changed. Can she find her “new me” and “new life” with her old boyfriend? Or are all her friends and family and the bartender right about Patrick?

So yes, there were some (slight) moments when Ros had the piss taken out of her but for the most part, she was allowed to be adult, coherent, employed, and given friends who would seemingly do almost anything for each other. I really liked Ros’s friends! Sumi’s birthday party sounded epic (roller skating then eating and getting shitfaced). Ros and her friends can put away some alcohol so it’s a good thing that John the bartender appears to be ready to provide them with open bar privileges.

There’s also something I feel needs to be mentioned about Ros’s boyfriend. I’m not an expert but he appears to have been written with (TRIGGER WARNING) a narcissistic personality. There’s a reason why none of Ros’s nearest and dearest like him. Her bestie Sumi left Patrick a Facebook message to fuck himself up the arse with a cheese grater. From the moment she began discussing him in the book, I knew there was no way that Ros would end up with this twat but wasn’t sure which of two other possibilities would work. After a while, one was eliminated from (my mental) contention and it’s very clear that the winner is a different man from Twat Face Wank Chops Patrick.

I was glad to see that Ros at least had some initial questions about Patrick and has thought at times that she needs to tear off his testicles but she falls back into the fabulous sex and stiffling her personality and needs to meet Patrick’s view of their relationship way too easily. But just as it’s very obvious that Patrick is the Twat Face Wank Chops her friends think he is, it’s also made plain with some excellent characterization and scenes who is the right guy for Ros. She also speaks up for herself when a podcast subject acts like a selfish arsehole. Yay Ros! Plus someone who knows public relations and agenting has massive confidence in her as well. It’s nice to see a heroine being lauded.

The end of the romance worked well for me. The one we all knew (for most of the book) is an arsehat of epic proportions is gone and the one we all know is so much better (though he’s allowed to not be perfect) has come through but tells Ros that he wants her to take her time as he doesn’t want to be a rebound guy nor rush her.

‘I’m not going to push you, Ros. Only, life is short and when you meet someone who makes you feel excited to be alive, who you can talk to about anything, who makes you laugh, who makes you want to get up in the morning just because there’s a chance you might get to see them that day? I reckon you should tell them how you feel.’
Before I could reply, I noticed something above his head.
‘Look,’ I said, pointing to the sky. ‘A rainbow.’
As he turned to see what I saw, a bright, bold rainbow that started somewhere near Big Ben and stretched all the way over to Whitechapel, I suddenly realized. The way he felt about me was just how I felt about him.
‘John?’
He turned back to face me. ‘Ros?’
‘I’ve had a chance to think about it.’
‘Oh good,’ he said gravely. ‘You gave it a whole minute, thank you.’
‘I think I am not ready to be in something new. But . . .’ I rested my hands on his chest as his eyes widened with surprise and a slow smile spread across his face. ‘But I also would really like to kiss you right now if that’s OK.’
‘You’ve got good instincts,’ he whispered, stroking my damp hair out of my eyes. ‘You just need to trust yourself more. I say, go for it.’

Ros has her friends, a great new guy, is working towards a wonderful job she is enthused about, taking charge of her life, and best of all, she’s out of the shed in the garden. Yay and happy read all around. This is one of those rare books that practically reads itself. B+