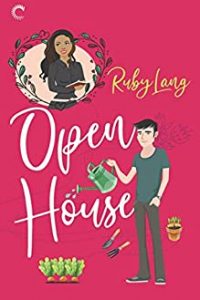 Love can take root where you least expect it.

Tyson Yang never imagined that one day he’d be the de facto spokesperson for an illegal community garden. But when the once-rat-infested-but-now-thriving Harlem lot goes up for sale, Ty can’t just let all their hard work get plowed under.

Even if he is irresistibly drawn to the lovely but infuriatingly stubborn real estate associate.

Magda Ferrer’s family is already convinced this new job will be yet another flop in her small but growing list of career path failures. But her student debt isn’t going anywhere, and selling her uncle’s historic town house and the lot nearby means a chance to get some breathing room.

Ty is her charming rival, her incorrigible nemesis, the handsome roadblock to her success.

Until one hot Harlem night blurs the hard line drawn between them, and the seeds of possibility in this rocky garden blossom into love…

I read this series out of order. So out of order that I read book three first and then this one and still haven’t read the novella that starts the series. But it was all okay and I never felt lost or that I was missing something. So yay for that. In this story grief, loss, maturity, family, and moving on are combined with New York City real estate, blackouts, and prized heirloom tomatoes.

As the baby of the family, Magda endures some mothering and smothering from her two much older sisters and mother. Magda has been trying to find her way in life and on the path has piled up a heap of student loan debt that she knows she has to start paying off. Her chance comes in taking the lead in trying to sell her Uncle’s 100 year old “Striver’s Row” Harlem brownstone. Other brokers have tried – and failed – but Magda is motivated. When her real estate mentor dumps the sale of a vacant lot on her as well, Magda sees the chance to pay off even more of her debt.

But her Uncle is stubborn and has turned down all offers even as he renovates the brownstone out of all remembrance of when he lived there before Magda’s aunt died. The lot isn’t going to be an easy sale either as the neighbors have cleaned out hundreds of pounds of trash and debris and turned it into a garden. After nurturing the site into a cornucopia of fresh vegetables, flowers, butterflies, and bees, they’re not thrilled at the thought of everything being plowed up, paved over, and gentrified.

I like that Magda is immediately honest with the handsome guy in a dirty shirt and cargo pants (so handy for spades and gloves and … garden stuff) about why she’s there at the garden. “She was going to have to kick a bunch of aunties out of their fucking fairy-tale meadow.” Tyson Yang doesn’t have a plot but he’s morphed into a garden gopher and compost turner for the older gardeners and a helper for the students building solar panels.  He also likes Magda though the not-too-subtle efforts of the aunties to get him alone with her are mildly embarrassing.

“I’ll bet no one breaks into the garden,” she was muttering.
Without thinking, he replied, “We get people cavorting there at night.”
“Cavorting?”
Damn. He couldn’t see her face clearly in the half-light of the city streets, but he could hear the laughter in her voice. And that made things better.
“They leave things. Like shoes. Erm, underwear. Condoms.”
It was only a list. A list of personal items. Not sexy. Do not think of sex.
“Right. Cavort is a good word for that.”
“Anyway, we want to have an open door—open doorway—policy. And that’s what that means, sometimes. People are going to go in. Maybe they’ll smash a few zucchinis in the process. Dammit. I didn’t mean it that way.”
But she had stopped walking and was laughing at him again; the sight of his face seemed to make her almost double over so that she had to hold on to the iron gate of a nearby brownstone.
He couldn’t help it. It wasn’t the greatest night of his life, and he was sweaty and smelly, and he was walking in the humid night air with the woman he’d slotted in his mind as his nemesis, and yet she was wonderful and her laughter was infectious, and he wanted to laugh, too.

When the gardeners decide to try and raise money to put in a bid to save the lot, he’s willing to help.

He’d only begun to rebuild himself again, and Magda and this person had come into his garden and were walking around like they already planned to slam five stories of concrete over the heirloom tomatoes that Mrs. Freeman had coaxed and cajoled into existence, and he wasn’t about to let those hard-earned fruits go down without a fight.

But he’s not one of them, no he’s not, and they’re not true friends, just acquaintances, people he’s been working daily with for ages but not friends. It takes his never-holds-back sister to start to set him straight on that. Jenny also gets into a hissing brawl with Magda’s sister at the block fundraising party over what their siblings are getting into. But what are they doing? Some smoking hot, very consensual sex during a blackout, that’s what.

The characters in this story are real. No one is a secret billionaire or special forces operative or too perfect to believe. People might be frustrating and frustrated but no one lies, there are no Big Mises or secret babies. There are pampered tomatoes and lots of zucchini but we are talking about a garden. Magda and Tyson both grow as characters even as they’re falling for each other. They’re facing some important issues in life and grapple with these but I kind of like that nothing is completely tied off in a neat bow by the end. Magda has begun to talk to her family about treating her more like an adult instead of someone they already expect will screw things up while Tyson has a better understanding of his and his father’s grief over the death of Tyson’s mother.

The conflicts aren’t written overly dramatically. There is some angst but it’s not dwelt on. I enjoyed the respect Magda and Tyson have for each other and the fact that they openly acknowledge the fact that they like each other from the start. This is a slower burn romance but it does bring some heat once these two decide they’re ready for it. I would have prefered to see Magda a bit happier about her career but she’s obviously shown she can handle it. B

Want to learn more? Striver’s Row is a real place in Harlem.

→ Jayne
Previous article: REVIEW: In Case You Missed It by Lindsey Kelk
Next Post: Open Thread for Readers for August 2020