I enjoyed another of your books in the past and had heard good things about Silver Lining, a 2000 release. Recently, I was in the mood for an absorbing, well-written book, and I trusted you to give me that. 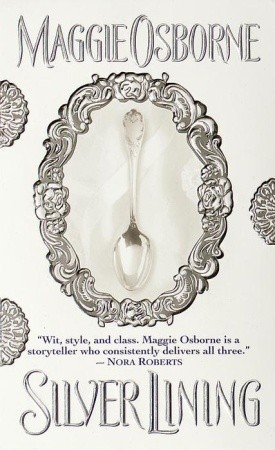 The story concerns Louise Downe, who begins the book known as Low Down. Louise is an unpolished woman panning for gold in Piney Creek, Colorado, when an epidemic of smallpox sweeps through the area. A number of miners are stricken and everyone else except for Louise flees. With determination and grit, Louise cares for the miners and all of them survive. When they celebrate their survival, they ask Louise what her dearest wish is, as they would like to fulfill it. Louise says that she wants a baby.

A minister who is present insists that her child shouldn’t be born out of wedlock; the miner with whom she conceives her baby must marry her. Louise doesn’t care if she’s married or not, but everyone accedes to the minister.

Unfortunately, Louise’s appearance is worse than bedraggled after caring for the miners, and none of them want to marry her. Lots are drawn among those who are unmarried and Max McCord wins, or rather, loses the draw.

Max comes from a successful, educated background and wasn’t panning for gold because he needed any. He was there to try to understand his late father’s gold fever (his father deserted him and his siblings to pan for gold).

Max does not want to participate in the lottery but is pressured to and gives in even though he’s engaged to another young woman. Philadelphia Houser is the daughter of Howard Houser, a banker and a pillar of the community in Max’s hometown of Fort Houser. But Max has a deep sense of honor and he feels constrained to marry “Low Down” and to help her conceive a child. He is repelled by her ignorance and feels pity for her, not attraction. Nevertheless, they marry.

As a child, Louise came out west on an orphan train and was fostered by an abusive woman. When her foster mother called her “low down,” she assumed that was her name, and it stuck. After running away, “Low Down” worked at a string of odd jobs, all of them menial, scraping together a living.

Louise plans to leave Max once she’s pregnant but holds Max to his promise to give her a child. The sex (or “poking,” as Louise thinks of it) is better than Louise’s past experiences but not so for Max. When Max and Louise arrive in his hometown of Fort Houser and he breaks the news to Philadelphia, Philadelphia cries and reveals she is pregnant.

Even if Louise were to release him, Max could not obtain a divorce in time to marry Philadelphia before the child is born.

Max’s younger brother, Wally, steps up and marries Philadelphia. But Max can’t get over Philadelphia even when she marries Wally. Philadelphia and Wally’s move next door into the family’s ranch, to conceal the advanced stage of Philadelphia’s pregnancy from the townspeople, makes things even worse.

Philadelphia’s father, the wealthiest and most powerful man in Fort Houser (the town is names after his father) vows to destroy Max and he uses his status as the owner of the town’s only bank to pursue that goal.

Can Louise and Max’s marriage succeed despite the huge obstacle Philadelphia’s pregnancy presents? Can Louise be accepted in Fort Houser and by Max’s family despite her background? Will Max ever get over Philadelphia and fall in love with Louise? And what will happen to Philadelphia?

When I picked up the book, I was not aware that that the hero is a rancher. If I had known, I might not have read it; raising gentle animals to sell for slaughter is one of the least romantic or sexy things I can think of.

Nevertheless, I enjoyed the book. Louise is a great character, full of grit and possessing a heart of (no pun intended) gold. Though her speech is unrefined, she has strength of personality. She’s a stark contrast to Philadelphia; the latter is the picture of elegance but has never had to lift a finger in her life.

Max is less charismatic than Louise, but still has magnetism. He is as strong-willed as Louise and he is committed to keeping his promises. That is why he marries Louise. But when he learns that Philadelphia is pregnant, this same sense of honor tortures him.

Philadelphia wore on my nerves, though. She is spoiled and scheming, and she’s almost but not quite a flat character. She wants Max partly because he’s the only man she hasn’t been able to manipulate successfully. I did wish she had been given more depth.

Two interesting side characters are Max’s mother, Livvy, and his younger brother, Wally. Livvy has character and resolve, and she and Max’s sister, Gilly, do right by Louise before anyone else in Fort Houser does, though reluctantly. I loved the evolution of Livvy and Louise’s relationship.

Wally is a good-hearted man.

At first, he seems like putty to Philadelphia’s manipulations, but that is only the beginning of an arc.

I had big issues, though. By the end of the book I could view Max and Louise’s marriage as workable, but for much of the book their class difference is portrayed so realistically that it feels like too great a gap to bridge. This is especially true during the first quarter of the book but persists even later.

I felt a bit guilty for not loving Louise; she deserves warmth and respect and I felt some of that. But even so, and with all her character and force of personality, I struggled with investing in her. The book made me squirm with embarrassment for her too many times.

For example, shortly after she and Max marry, they stay at an expensive hotel in Denver. While she is preparing for her first dinner in a hotel dining room, Louise puts kerosene oil on her face, thinking it is a moisturizer. Later, when she moves into Max’s ranch house, she displays a silver spoon and a scratched pewter watch case, prized possessions of hers, on the mantelpiece.

These were marvelous ways of portraying her, terrific touches, but they were also discomfiting. It was hard for me to get past her abject ignorance in the early parts of the book. Although that squirming feeling lessened, it never completely went away.

Conversely, I felt it took Max too long to come around to appreciating Louise’s good qualities, and even longer to see her as an object of romantic feelings. Max doesn’t dislike Louise and he appreciates her grit in a detached way, but it never connects into admiration of her and a feeling of pride in her, and that was where I wanted to see the book go.

Even after Louise brings all her determination and force of personality to bear to save his cattle ranch from Howard Houser’s attempts to financially ruin it, Max finds it hard to admit that she is worth admiring.

The plot called for Max to be obsessed with Philadelphia for most of the book. By the time he realizes what a treasure he has in Louise, it feels like a day late and a dollar short.

A stronger emotional conflict could have helped with that. More turmoil on Max’s part could have communicated an internal conflict of growing love for Louise versus his feeling of obligation to Philadelphia. And I think that I might have come to love Louise had I seen Max come to love her.

But although Max felt disloyal to Philadelphia, I didn’t read it as being due to strong emotions for Louise. It seemed like it was because he had married Louise and not Philadelphia, and because he recognized Louise’s good qualities intellectually. His guilt felt self-involved, too much in his own head.

Even when he finally realizes Louise is superior to Philadelphia, it’s not because something about Louise finally wins him over but because of Philadelphia’s actions and his reaction to them. It’s not until Philadelphia disqualifies herself from the contest that Louise wins Max’s heart.

This made me uncomfortable, too, but I felt this discomfort served the book well. It was one of the few things that put Max and Louise on more even ground. That he could look down on her but still have to accept his commitment and obligation to her narrowed the power gap a bit. It gave Louise some power within the context of their relationship, even if she lacked his social power.

I felt a bit sorry for Wally because he gets stuck with Philadelphia at the end. I could see Wally and Philadelphia’s marriage working out, but he deserved more. He was a wonderful man, the best man in the book in my opinion, and he deserved a wife who could grow into being his equal in that way. I didn’t think Philadelphia ever would.

The book had the qualities I was looking for when I picked it up, though—a gripping storyline, strong characters, and good craftsmanship. It was a great character study. There were a lot more books in this vein in the 1990s, books where the conflict abuts the happily ever after and some of that happy resolution is pushed off-page. I knew that some of that might happen here so the way the book ended was only a small disappointment for me. But I think it might be to some readers who are newer to the genre and unfamiliar with this older style of book.

I appreciated that this book didn’t have the racism found in a lot of books from the 1990s and even the early 2000s. At one point Louise mentions that she worked in a Chinese laundry and that unlike what some people say or would expect, she was treated well and with fairness there.

Silver Lining reminded me a little of some of LaVyrle Spencer’s historical Americana romances. It was a worthwhile, well-written book and I’m glad I read it. As a character study, and a story, it’s above average, and I really like books that work well both as character studies and as stories. But it wasn’t very romantic, so…B-?

→ Janine
Previous article: REVIEW: Conned (The Bureau, #6) by Kim Fielding
Next Post: REVIEW: In Case You Missed It by Lindsey Kelk