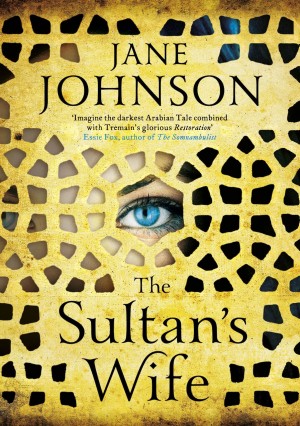 The tyrannical King Ismail resides over the palace of Meknes. Through the sweltering heat of the palace streets, Nus Nus, slave to the King and forced into his live of servitude as court scribe, is sent to the apothecary. There he discovers the bloody corpse of the herb man, and becomes entangled in a plot to frame him for the murder. Juggling the tempestuous Moroccan king, sorceress queen Zidana and the malicious Grand Vizier is his only hope to escape the blame.

Meanwhile, young, fair Alys Swann is captured during her crossing to England, where she is due to be wed. Sold into Ismail’s harem, she is forced to choose: renounce her faith or die.

An unlikely alliance develops between Alys and Nus Nus, one that will help them to survive the horrifying ordeals of the Moroccan court.

Brimming with rich historical detail and peppered with real characters, from Charles I to Samuel Pepys, The Sultan’s Wife is a story of enduring love and adventure.

I was enchanted when I read “The Tenth Gift.” I was much less pleased with“The Salt Road” even though it revisited the country of Morocco and also used the same dual timeline to tell its story. This left me torn about even trying “The Sultan’s Wife” which was already out in paperback then. Did I want to risk another disappointment or would I be rewarded in the end? In the end, a comment on my review of “The Salt Road” which likened it more to “Gift” decided me.

Now this is more the kind of book I wanted the last time. The descriptions of life in 1670/80s Morocco are vivid and the visuals stunning. What a magnificent place the palace of Meknes must have been in its day though the suffering to build it seems to have rivaled anything achieved by Louis XIV, Peter the Great or Qin Shi Huang. But then Moulay Ismaïl Ibn Sharif didn’t seem to have heard an adjective or adverb that he didn’t want to better. Eight hundred children from over 1,000 concubines? My mind reels.

But what this book has that the previous one I read didn’t is compelling characters I care about and / or want to see more of as well as a quicker pace. The story hums along with few slow spots and never lost my interest. Which characters was I interested in? Well all of them, hero, heroine, villains, supporting secondary or merely passers-by. I might not have liked them all and positively cheered when a few got what they richly deserved for making everyone else’s life a living hell but they didn’t bore me, annoy me or make me want to slap them off the page.

Since the book is named for Alys, I’ll start with talking about her even though she doesn’t appear on page for quite a while. From the beginning I did want more of her POV and longer, more explanative scenes. Major things happen in her life but they’re skipped or we come in on scene 2 or 3 having missed the opening of the play. Her capture by Barbery pirates? Missed. Her arrival in Meknes and initial presentation to the Sultan? Not there. Why she finally decided to capitulate and “convert?” Well, Nus-Nus had explained a bit about the fact that if she didn’t, they’d both eventually die long after they wished they wanted to but she still appeared to be philosophically debating the issue when the scene ended.

Still Alys has got some spirit and backbone to her. She doesn’t back down in the face of the Barbary pirates, either onboard ship or once she gets to Morocco. At the time Nus Nus meets her, she has been bastinadoed and has the Sultan screaming at her yet she hasn’t yet yielded her faith or her virginity. She listens, she learns and she survives.

Her choice to sexually submit to the Sultan is understandable once Nus Nus has explained the mechanisms of power in the harem. Catch the Sultan’s attention – but not too much – bear a child – preferentially a son – and you can be set for a long, luxurious life.

Once I accepted the idea that I wasn’t going to see as much of Alys’s POV as that of Nus Nus, I was eventually okay with it as I found Nus Nus to be such an interesting and charismatic character. His story is unfortunately a common one of being sold into slavery but like Alys, Nus Nus is a survivor. He survived being sold into slavery, twice, survived being castrated, survived the sodomite attentions of the truly oily and despicable grand vizier and has gained some agency in his life. True as a slave he doesn’t have all that much but he’s carved out a niche in the palace in the service of the Sultan having learned how to “roll with the punches” and face down his opponents.

Nus Nus is also an intelligent and decent guy. He’s learned different languages, enough about herbs to detect when the Sultan’s Chief Wife is up to no good, and knows when to hold his tongue and keep a secret. His sense of duty is impeccable and his wits are keen – good things when he’s in the employ of a man who kills almost daily and whose rage is both swift and merciless. Nus Nus is who I’d want guarding my six and giving me “how to make it through another day” tips.

Mouley Ismael is a fascinating character. He is a chilling example of “Absolute power corrupts absolutely.” Was he psychotic? And why do psycho killers always like cats? Zidana reminded me of a huge black widow spider hanging right above your head. Move and she might bite you. Don’t move and she surely will.

What makes my grade a bit lower are some questions I ended up with. How did Nus Nus end up in service of the Sultan and in the jobs he has? It’s almost as if he sprang immediately from when he was castrated to being keeper of the Sultan’s couching book and thus keeper of the records that would establish the succession. Alys has a tremendous secret which is not discovered until almost the end of the book. Why didn’t she make use of it earlier? There are several points where it could have served her well though it would have lessened the impact on the reader but my immediate reaction to it was, “well, why didn’t she say so earlier??”

Initially the Sultan is fascinated with Alys’s coloring – blonde, blue eyed, pale skin – but I find it difficult to believe that he wouldn’t have had other European women in his harem or have seen the Christian slaves at work. His decision to breed a racially diverse army as well as her internal resistance to capitulating to him might account for his continued interest in her but that’s the only reason that’s given in the story. Again during this point I don’t see much of the changing dynamics from her POV.

The last but perhaps the most important is why does Nus Nus fall in love so quickly with Alys and when does she fall in love with him? He sees her blue-gray eyes and snap!, he’s smitten? I guess so. Once he falls his fidelity and defense of her are laudable but I wanted more than her coloring as a reason. I could see a little bit of her changing feelings but given the paucity of her POV as compared to his, again I wanted a bit more than I got.

Parts of this book are amazing. I was cheering Nus Nus on in his struggles to save the woman he loves and survive the psychotic Sultan he served. His reaction to the beauty of the music he heard in England moved me. The setting and characters make me want to go out and learn much more about them. But there were a few holes and tears in the tapestry plot that needed some repair. B-

→ Jayne
Previous article: Android, Apple, wearables and more
Next Post: Monday News: Facebook screws with its users, the Netherlands tests the resale of digital books, a new documentary on Amazon, and The Princess Bride gets Legoed