REVIEW: Drawn together by Z.A.Maxfield 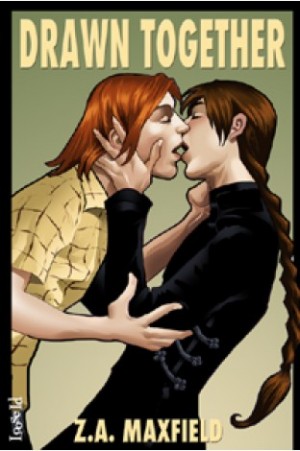 Rory might just be a simple southern boy from St. Antoine’s Parish Louisiana, but he knows what he wants. He’s been in love with the girl of his dreams, reclusive and mysterious artist Ran Yamane, since junior high school. And now he has the chance to meet her. He’s going to chuck everything and travel 1,500 miles to Anime Expo in Long Beach to tell her, and no one and nothing is going to stand in his way.
Ran Yamane is not a girl, but he gets that a lot. People come to him with teddy bears and chocolates and disappointment by the truckload. He’s trusted fans in the past and been tragically wrong. So when he meets Rory he’s understandably wary, but resigned. What he’s not prepared for is his magnetic attraction to the young man, Rory’s apparent willingness to overlook his gender, and the fact that their lives are both thrown into chaos when his number one fan (and psycho stalker) shows up to get revenge.

I read this book of yours shortly after it was released in 2009 after almost losing faith that I would be able to find a m/m book which had some semblance of a story in it. When I started reading m/m year or so before, I first read three very good books and then a lot of very bad books. Your book helped a lot to convince me not to abandon m/m, but I have not reread it in years and wanted to see if the good memories I had would stand up to a reread. Well, they did and they did not.

As the blurb states, Rory and Yamane meet because Rory decides to temporarily forget everything else and go on a crazy adventure to meet the famous comic artist whose works he loves. He also thinks he has a crush on this woman.

“Why did you really come here?” Yamane asked. “I want the unvarnished truth.”
“To find someone I thought…” Rory remained silent for a minute. “Someone I thought I loved.”
“Give me your arm, please.” Yamane uncapped his marker.
“Why?” Rory did as he was told.
“Blind faith should be rewarded and outright stupidity should be eradicated. I haven’t decided which we have here, yet” He wrote something on the interior of Rory’s forearm”

First and foremost I think that if you want to increase your chances of enjoying this book, you need to keep in mind that it plays with a lot of things from yaoi/manga. I think the cover by P.L. Nunn puts you in the right mood. No, Yamane and Rory are not the exact representation of uke/seme because the writer made them more complicated characters with at least some real world characteristics, but there was *a lot* of uke and seme in each of them in my opinion. Rory may initially start out as a devoted, starry- eyed fan, but we see very clear that he is a “compulsive hero”, a “knight in shining armor” who would do anything to protect Yamane. Rory is also big and strong. Rory has been on rescue missions, does volunteering, helps kids in need, etc. I still loved him, his perfections notwithstanding. Rory is the one who is supposedly straight -but gets to discover his inner Gay For You in this story. It was not the worst variation of GFY (again, remember how often it happens in yaoi), at least Rory struggled for a few days, and he mentions that he had some repressed memories of having feelings for other men. For the purposes of this story I was able to swallow it.

Yamane often needs to be rescued during the story, he is much smaller than Rory, he wears his hair in a long braid (but gets upset when he is being compared to a woman), and he is half Japanese. And of course him being a manga/comic artist himself signifies an extra connection with yaoi storytelling. I liked ,though, that Yamane does not *always* need rescuing and when he is in real danger he is calm, cool, and collected, “but when he is imagining that something may scare him, he overreacts big time.” (This is a close paraphrase I believe, but it could be a quote which I could not find so I put quotes just in case). I appreciated the author tried to make Yamane more than your typical uke, but as I said before, there was enough of uke in him for me to keep saying to myself – remember this is heavily yaoi influenced and try not to roll eyes too often.

I partially succeeded – I found their developing relationship to be a nice fairy tale and was able to suspend disbelief and buy it. However on this reread I could not stop wanting to smack something with this book repeatedly when I was reading the suspense parts of the story. The men are running from a crazy stalker of Yamane (of course she is a woman) who hurt him in the past, and the actions of this stalker just made very little sense to me. Amelia is crazy; there is no other word for her. When I read the book for the first time I was not bothered by it because at that point I had not read so many other m/m books with over the top female villains, so I had not yet developed strong allergy to them. I kept saying magic word “yaoi” when I was doing a reread and I was happy that Amelia’s portrayal did not make me angry. There were also normal women in the story; no matter how small their parts were, so I don’t have a reason to complain that Amelia could be viewed as the representation of all women in the story.

What really made no sense to me was Amelia’s diabolical cleverness in finding Rory and Yamane several times, because, well, it just was not well explained. I was also trying to understand why her minions paid any attention to her considering how over the top she behaved in the first place.

As an aside – the detective in the story would give our heroes advice to run, which made me want to shake this detective repeatedly and ask him whether he had any other reasons to suggest that they should run besides author needing that in order for the plot to play out. I realize that I am not being very consistent, but there is nothing I can do with it – in some instances I could suspend my disbelief and in some instances absolutely not. The final showdown should be put in the “Absolutely not” column.