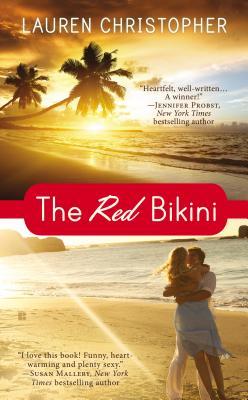 For the last five years, Giselle McCabe’s life has been about sippy cups and playdates. But when her husband suddenly leaves her, Giselle flees to her sister’s California beach house for a two-week getaway. Out of her element, she’s surprised to receive such a warm welcome—especially from gorgeous celebrity athlete Fin Hensen……

Fin is escaping his pro tour for a season, trying to lie low until all the hubbub over a huge mistake in his past blows over. And when he sets his sights on Giselle, he realizes that the beautiful good girl just might be the ticket to his success.

But Giselle never expected romance to enter the picture again—especially with a hot twentysomething from a completely different world. And even though it feels like Fin is everything she’s trying to run away from, she can’t help coming back for more……

I like older woman/younger man stories and books about fresh starts so I requested The Red Bikini for review. It had a fairly strong start, faltered a little in the late middle and mostly succeeded for me by the end.

Giselle Underwood (she still uses her married name) comes to stay in her sister’s small apartment in Sandy Cove, California with her daughter, Coco.  Four months earlier, her not-very-handsome, cheating jerk of a husband walked out on her for a stacked bimbo.  Giselle’s life is thrown into disarray. She is mostly a creature of order and calm. She’s sensible and reserved – a perfect doctor’s wife in fact – but her doctor husband didn’t want her and she doesn’t understand why.  Roy has been dodging her calls ever since he left – even the divorce has been handled by lawyers and when he has had access visits with Coco, things have been arranged via text message and pre-school pick-up/drop-off rather than direct contact.  Giselle is the eldest of three sisters and at 35, she feels rudderless and old, unwanted and tired – too much identified with playdates and crayons and not so much with anything remotely sexy.  Giselle’s sister, Lia, is in New York for almost the entire time Giselle and Coco are staying in California but she has asked her neighbour, Rabbit, a surfer, to look out for her sister and niece.  Rabbit runs a surf school for “grommets” (children) and Giselle will photograph and create a brochure for the school while Coco learns to surf.

Fin Hensen is 28 (nearly 29).  He’s a pro-surfer who’s had a rough past year on the world tour.  A female pro-surfer and good friend died in the surf and his performances thereafter were poor and rumours regarding possible scandal related to Jennifer’s death plague him. He’s only home in Sandy Cove for about 12 weeks a year and he’s not looking for any kind of relationship.  He’s never even had a romantic relationship lasting more than a few days. I didn’t get the impression that he was  a player as such (although Lia thinks he is) – more that he doesn’t let people get close to him. He is, of course, gorgeous and fit and tanned so he doesn’t have trouble attracting “a Betty”.   His previous year has been so bad that many of his sponsors dropped him and his last sponsorship deal is looking shaky. He needs to convince the big boss that he’s respectable and reliable – apart from being gorgeous, Giselle is exactly what he needs to improve his image.

There is no subterfuge between Fin and Giselle.  He tries hard to be honourable with her and to tell her how things are. In fact, he resists her advances as the book progresses because he knows she is a long term relationship kind of woman and he can’t offer her that. Lia is also his friend and he knows she’d be really mad at him if he took advantage of her sister. I appreciated that the book didn’t create big misunderstandings and that for the most part, even when it was difficult, they tried to talk to one another and be honest with each other.

Giselle is described as kind of “Grace Kelly” but she doesn’t feel desirable and she doesn’t think she can compete with the bikini beauties who seem to flock to the surfers.  She is reserved and a little shy and it made sense that she questioned her desirability after her experience with Roy.  She had taken him back after one affair, only for him to repeat the process later and then leave her.  Giselle loves Coco dearly but has never had a passionate romance.  The feelings Fin inspires are as wild and uncontrolled as the ocean and gradually, she comes to appreciate herself and allow herself to be happy.  The age difference was really a non-issue for me.  It wasn’t significant in my opinion in any event but Fin always seemed so much older than 28 anyway.  He had had a rather bohemian upbringing and in many ways had been alone for a long time so he came across to me as somewhat of an old (and wounded) soul.

The surfing aspects of the book felt authentic. I didn’t understand all of the terminology but that didn’t throw me out of the story or anything. I didn’t feel like I was getting Surfing 101 but there was enough to flavour the story well.

Some aspects of the secondary characters’ backstories seemed awfully convenient and Roy was just one note – selfish and controlling.  It did seem that he cared for his daughter but the reader didn’t see a lot of him interacting with Coco through the book.  That impression mainly comes from Coco being relatively well adjusted.

Coco was cute and funny and not at all irritating. Because Roy’s mother lives about 30 miles from Sandy Cove, she was able to have a visit for a few days which gave Fin and Giselle some private time.  I appreciated that Giselle’s first priority when Coco was around was her daughter’s safety, comfort and happiness. Coco told silly 5 year old jokes throughout the book and it was sweet how Fin joined in her games and traded knock knock jokes with her.

There was definitely chemistry between Fin and Giselle and I liked them individually and together.  The problem for me was that they only knew each other for two weeks and even then, they weren’t in each other’s pockets.  It was just too quick for me to believe a HEA between them, especially given how cautious Giselle was regarding Coco.  I did buy changes that Fin was prepared to make because it seemed like he would have got there anyway but it was all too much too fast for me.

This is your debut book and I think it showed.  Some of the analogies didn’t work for me – “oyster-white skin” for example had me scratching my head. Because oysters are grey and slimy – and others were confusing:

She could smell coconut coming up as a  tribal heat from his chest.

I thought the romance was too quick and the book did end up dragging a bit for me. As well, some of the plot threads didn’t go anywhere.  For example, Lia had arranged a blind date for Giselle with a local real estate mogul Dan Manfield. She never goes on the date and as far as the book told me she never even called to tell him she was bailing.  I didn’t warm to secondary characters, Tamara and Fox as I think I was supposed to – their characters weren’t fleshed out well enough for me and Tamara especially, came across as a kind of caricature.

On the other hand, there were portions of the story which were very well written and where the tension and risk had me engrossed – for instance, when Tamara takes a late night swim.

The extract from the next book which features Lia and a crochety sailor was intriguing – there was enough here that I just might give that a try too.

The Red Bikini  is a fairly gentle romance with a little steamy sensuality toward the end, enjoyable enough but one I found easy to put down most of the time I was reading. I give it a C+.