“My dear Isabelle, in the attic you will find a box with your name on it.”

Isabelle’s estranged archeologist father dies, leaving her a puzzle. In a box she finds some papers and a mysterious African amulet — but their connection to her remains unclear until she embarks on a trip to Morocco to discover how the amulet came into her father’s possession. When the amulet is damaged and Isabelle almost killed in an accident, she fears her curiosity has got the better of her. But Taib, her rescuer, knows the dunes and their peoples, and offers to help uncover the amulet’s extraordinary history, involving Tin Hinan — She of the Tents — who made a legendary crossing of the desert, and her beautiful descendant Mariata.

Across years and over hot, shifting sands, tracking the Salt Road, the stories of Isabelle and Taib, Mariata and her lover, become entangled with that of the lost amulet. It is a tale of souls wounded by history and of love blossoming on barren ground.

In 2008 I read and enjoyed your first book, “The Tenth Gift.” The mixture of modern and historical, England and Morocco captivated me, sucked me in and wouldn’t let me go until I’d finished the story. I freely admit that I had looked for more books by you in the years since but didn’t keep up with you as I should have and so missed the release of “The Salt Road” last year. Now I’ve made up for that. But you might not be happy that I did. 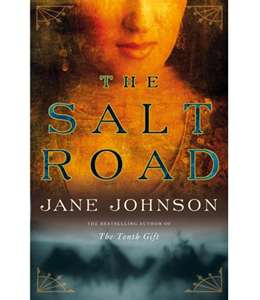 I figured that this would be another book with a dual narrative – and it is. And that it featured two sets of people, part of it would take place in England and then it would carry on and finish in Morocco – and it does. As with the first book, it starts out a bit slowly – in both narratives – but to me it stayed in first gear for far too long. In fact, it grinds along for most of the book. I kept waiting for my interest to be caught for good but instead I contemplated setting the book down quite a few times. Still I stuck it out just to see how everything would finally knit together. It was a long journey.

I don’t mind some detail in the books I read. In fact, generally I like it but here the climbing stuff that Izzy is into and that brings her to Morocco was mind numbing. During the climb that injures her and then introduces her to Taib, who comes to her rescue, Izzy thinks that her painstaking technique was driving her climbing partner insane. I was right along with him. When Izzy comes to grief and almost plunges down the mountainside, all I could think was, “Finally. Something happens!” Cold blooded of me, I know but by then I was desperate.

Meanwhile, the narrative of the young Tuareg Princess – and didn’t her exalted bloodlines get trumpeted enough – Mariata was crawling along at an equally slow pace. At first, I thought this bit was farther in the past and it wasn’t until you mentioned something about trucks that I realized this section was probably taking place in the late 1960s which, again to be honest, kind of killed my “oooh, more about historical Morocco” buzz. The information about Tuareg life is interesting but the story as a whole simply limps along at camel pace.

Neither Izzy nor Mariata are especially warm and cuddly people either. Izzy veers from wild child to uber self contained and back to a point where she throws a temper snit that makes even a four year old stop his tantrum and take notice. Mariata – the Princess! and don’t you forget it, bub! – reminds me of nothing so much as a sulky, whiny teenage snob. It wasn’t until she heads off on her own to escape the fate her stepmother has in store for Mariata that I felt any respect for her.

And just when the action picks up for all concerned, several things happened that I hated to see occur. Taib takes Izzy out to see someone who might be able to explain the mystery behind her amulet and then dumps a lecture on her about Berbers and Tuaregs after which Izzy falls prey to a heaping amount of White Guilt. Great, Huge amounts of White Guilt. Berbers and Tuaregs aren’t free of historical past social injustices – though I noticed that in the book only the evil tribe that Mariata stays with for a time actually have slaves – but Taib sure dumps a sack of ashes in Izzy’s lap for her to pour over her head all the while remaining saintly as he does so.

Mariata’s world has fallen apart when her father carts her off to a new life trying to be modern in a town. For Mariata it’s the seventh level of hell and made more so by her Eeeeeeevil Stepmother. Honestly, if there was ever a character straight out of central casting it’s this stepmother. And only because that woman is so Eeeeeeevil can I put up with more of Mariata’s “My bloodlines! I’m a Princess!” routine. I wanted to seriously stuff a sock in that. Then comes the suitors the Eeeeeeevil stepmother tries to foist Mariata off on and it dawns on me that Mariata is a Mary Sue. All men either love her or want to screw her – depending on their own evilness or lack thereof. And for a woman who’s lived out in the wild and traveled across deserts and been around camels all her life, Mariata is certainly ignorant of how to prepare for a journey and whiny once it starts. Only when she doesn’t have anyone to bitch to does she suck it up and get on with survival.

At this point, I was holding onto my patience and beginning to skim a bit just to see how it ends. I had a rough idea and it turned out I was right. What I didn’t count on was the completely unnecessary return of a previous evil character, a sick revelation from Izzy’s past (was this really necessary?) and the revelation of how long Mariata had to wait for her HEA. Serious saga stuff. Oh, and the second lecture Izzy – and this time Taib too – get on Tuareg oppression. I could hear the ax grinding during the impassioned speech. The “two years after” chapter is an almost sickly sweet wind up of the whole and I find it hard to believe that Izzy has gone native as quickly as she has.

Thus “The Salt Road” fails me almost completely. I never much warmed up to either heroine, the stock characters were ridiculous, the lectures were tedious and the ending wrap up was everything I hate in epilogues. Except for the facts I learned about Sahara desert survival and the Moroccan setting the grade would be an F but as it is, the location and cool stuff brings it up to a disappointing D.

→ Jayne
Previous article: Open Thread for Authors (Author Promo) for July 2012
Next Post: When I bought your book, I didn’t sign up to be your beta reader