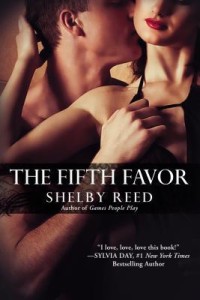 Originally published by Ellora’s Cave in January 2004, this book was reissued by Berkley Trade on 5 November this year. When I read the synopsis I was all over it – it is, after all, a manwhore book.  And I do have a weakness for manwhore books.

“Adrian” is the premier escort at Avalon, a high class escort agency for wealthy women, based in Washington DC.  He is gorgeous and skilled in bed (of course) and his calendar is always fully booked.  He charges $1,000 an hour (but how much of that he gets to keep is unclear – I know he does very well out of it financially).  Avalon’s owner, Azure Elan (an alias if ever I’ve heard one surely) keeps a close eye on all her escorts and Adrian is her biggest earner.

Billie Cort , a 33-year old reporter for Illicit magazine, is given an assignment to write an article on Avalon and its services and, lucky her, she gets to interview Adrian as part of the package.

One of the other escorts is Luke DeChambeau – known as “Lucien” at Avalon – all the escorts are “rechristened” by Azure.  Luke and Adrian are best friends but Luke has been caught by the lure of drugs and, apparently, rough sex.  He regularly turns up at Adrian’s apartment with bruises and whipmarks on his body but he will never say who is lover is.  Luke has falled in love with Adrian but the feelings are not reciprocated and this has caused a schism in their friendship.  Adrian is very concerned about his friend’s continuing downward spiral and is devastated when Luke commits suicide.  (This all happens very early on in the story so I don’t believe it is a spoiler.)

To the story’s credit, I think it is the combination of Luke’s death and meeting Billie which has Adrian questioning his life.  It is apparent that for some time he had been less than enthused about his job but lacked sufficient motivation to get out.  These two life-changing events are the catalyst for self-reflection for Adrian and what follows from it.

Because: reasons, the police suspect Adrian having a murderous part in Luke’s death and, seeing her prized possession moving away from her influence, Azure uses this to keep Adrian on her string. This was the least effective part of the story for me.  Some of the things which formed part of this subplot made no sense to me and stretched my credulity to breaking point.

The main story really, is the romance developing between Billie and Adrian.   Billie sees, because she is looking at him as a person and not just as a pleasure toy (I make no judgments on those who frequent male escorts – in the book this was the way it was presented), something vulnerable and familiar in Adrian and she longs to know the man beneath the mask.  She is fascinated by him from the first moment they meet – of course she is attracted, but she wants to know him, not just his body.

Billie shifted to see his face, found it somber and watchful. Under the standard silky disguise of a courtesan lay an intensity and vulnerability far more exciting. His emotions ran deep, his sensitivity even deeper. Not so very different than herself, she realized with surprise. Something about the man under the mask was strikingly familiar.

Adrian for his part, sees in Billie, if not his redemption, then perhaps a reason to seek it.  The pair move back and forth from attraction and some consensual, non-transactional, sex* to pushing each other away because of course it could never work between them.  Adrian believes he is incapable of deserving Billie, and Billie is afraid of getting her heart broken. When I said “non-transactional” that was kind of wrong.  Billie never pays for sex with Adrian but there is a “favor for a favor’ in the story (hence the title) but I felt that was more of an excuse to move things along than anything else.

Adrian approaches sex with his clients in a fairly businesslike fashion.  I got the impression he’s very good at his job but it’s not about pleasure for him and it’s not really about intimacy with his clients.  What he experiences when he is with Billie is a different thing altogether and he becomes increasingly dissatisfied with life as an escort.

When had satisfying a woman become a treasure? When had the entire, sensual routine gone from mere product to something of value? He hadn’t seen its potential, hadn’t been aware of the gossamer threads that bound carnal fulfillment to pleasure of the heart.

It terrified him. It moved him. It dislodged his beliefs like a vast puzzle upended and falling into a million irretrievable pieces.

I found some of the writing to be lyrical in its descriptions and I believed that Billie represented something wholly new to Adrian and that being with Billie was not the same as being with a client.

It came to him then, permeated his disjointed thoughts. Billie was teaching him—him—how to make love. With a jolt of surprise at the crashing irony, Adrian realized he hadn’t known how until now. He, the consummate lover, so renowned for his sexual skill, so proficient and controlled and practiced, had only played at making love, where Billie . . . God. Clearly, it was all she knew. Pretense just wasn’t in her spectrum of capabilities.

Unlike in Fallen from Grace by Laura Leone, where the hero was also a prostitute, I felt Adrian had choices and could have walked away at any time if he had wanted to.  Unlike Ryan (the hero of Fallen from Grace), Adrian was never trapped and was at no risk should he choose to leave.  Thus I felt Adrian was a bit “poor little rich boy” at times and I wasn’t always all that in sympathy with him.  There was a thing which happens near the end that Billie does which make me very cross – she does redeem herself in not too long a time but I felt she lacked honesty then and she needed to do a lot more groveling than the basically none she did.  The last part of the story felt a little like authorial manipulation to me to add to the angst-factor and as I said above, the subplot involving Azure and police suspicion of Adrian regarding Luke’s death made me raise my eyebrows on more than one occasion.

Nevertheless, it was an entertaining read and some of the writing was beautiful.  I did believe in the feelings Billie and Adrian shared and I thought they would make a happy life together.  I give The Fifth Favor  a B-.