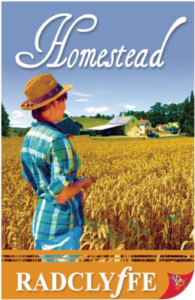 Tess Rogers grew up in the midst of chaos and uncertainty, but she always knew one thing to be true—one day six hundred acres of prime farmland would be hers. Then she discovers not even that truth can be counted on. Tess’s stepfather has kept important secrets, and Tess’s dream of breeding a line of organic dairy cows suddenly goes up in a burst of smoke and flame.

R. Clayton Sutter is an expert at managing just about anything—money, businesses, and people. Getting NorthAm Fuel’s newest shale refinery operational in the rolling hills of Upstate New York shouldn’t be much of a challenge, but then, she hadn’t counted on dealing with vandalism, petitions, and a woman she’d never expected to see again—one who still haunts her dreams.

When Tess and Clay square off on opposite sides of the heated debate, past and present collide in a battle of wills and unbidden desire.

Your name has been on my terribly long list of Authors To Try for a while now ever since we posted some reviews of your other books. This one caught my eye because of Tess’s goal in life – to run a top-notch organic dairy farm. I have a great respect for people who run farms and especially dairy ones – up with the cows, be there to milk them twice a day, day in and day out regardless of anything else. I was rooting for Tess’s dream from the start. The main question for me was could you take a fracker and make me pull for her too.

There’s a boatload of stuff going on in this book: second chance at love, across the tracks, rural girl vs city, small business vs conglomerate. Lots of conflicts here but what I like is that the external conflict issues are relevant to today – fracking for badly needed national energy supplies and an infusion of cash into a hurting local economy vs organic milk production for the burgeoning Greek yogurt demand. And I do love me some Greek yogurt, especially the vanilla flavored with fresh fruit. I must stop now as I’m making myself hungry.

Tess is the small town, used-to-be bumpkin but she’s the one who had enough guts to try and contact Clay after their relationship imploded and be honest. Clay caved into the demands her Our-Family-Name-and-Prestige-is-Everything father issued and turned her back completely on their relationship. In my opinion, Clay is saved from being a total heel about how she left Tess without a word by the fact that she knew her father would rather destroy Tess’ reputation rather than give into anyone else’s demands. Tess is one hard cookie, but then see the above statements about dairy farmers, and I like that she’s actually mentally tougher than Clay – the one who’s always been seen as harder edged.

I thought all the issues were well handled and thought out. No one was made into the “villain” vs “the heroine” and a balanced view of all the opinions was shown. As someone who is undecided about fracking, I can only hope that companies treat the environment and the people directly concerned with the tact and fairness Clay demonstrates. But we are talking Big Business so I’m not holding my breath. But enough of my opinions of that. Clay shows the strength of character she’s described as having as she deals with a tough situation that gets dropped in her lap while Tess shows that she’s the intelligent person she’s portrayed to be as well as a hard worker.

One thing that did catch my attention in a bad way is the vandalism scene. It’s night, with unknown people possibly roaming the worksite who have already done some damage and Clay and her bodyguard are tracking him/them down. A slight romantic friction has developed between them over Tess and – with all this going on – Ella stops and says to Clay that now’s the time to discuss things. WTF? Ella is former Secret Service and she thinks this is a good idea? I sure didn’t.

I also got tired of Tess repeatedly charging headlong into the risk of danger despite Clay practically begging her to stay back, keep safe, keep out of danger. I realize it’s Tess showing how much she loves Clay, how much she can’t stand to risk losing Clay and that she’s stronger now then she was then but after a surfeit of it I just wanted to say, “Tess, sweet Jesus, will you just listen to what an expert has to say?”

The resolution of the Organic Dairy vs fuel supply conflict had me worried down to the end. Tess had poured her heart, time and sweat into meeting all the guidelines, had a business plan and chemical free cows in the near future and if she lost all that, I was going to riot for her. The solution is neat, clean and makes perfect sense. I love it when conflicts end that way instead of by deus ex machina.

The resolution of Clay and Tess’s relationship eventually worked for me. Fifteen years without Clay making any attempt to fix the devastation she left behind had me mad for Tess’s sake but she does own up to her mistakes in what she did and allowed her father to demand of her. I give her points for that and for not ducking Tess’s hard questions and anger once they got to a point where they were ready to talk. I think the relationship will have to be a bit long distance as Clay outlined but I think eventually it will all work out.

I’m glad I finally tried one of your books. The characterization is excellent, the plotting tight and crisp, and the issues realistic. If not for the slight out of control drama moments I would have liked it a bit better but it will end up a B- for me.