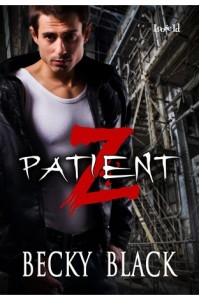 Two years ago the zombie apocalypse wiped out the world police officer Mitch Kennedy had a role in. But he’s found a way to continue doing his duty, serving as guardian of a small community of survivors, living in the safest place they can find. When the group takes in Cal Richardson Mitch can’t help but be attracted to the first available–and incidentally, gorgeous–man to cross his path in months.

Mitch and Cal can’t resist each other physically, but each man tries to hold back his emotions. Though he’s strong on the outside, Mitch is too badly hurt inside to risk more pain. Cal’s very sure he won’t stay for long. He’s been a drifter all his life and it came naturally to him to survive alone after civilization fell. He’s sure this is a temporary stopover for him. He has no intention of becoming emotionally involved with a cop who is certain to despise Cal when he learns the truth about him.

As much as I love fantasy and sci-fi stories, I usually do not read post apocalypse stories, and I almost never read zombie stories. I do not enjoy horror, and in my mind zombies are placed firmly in the horror territory. However, I wanted to give your writing a try and I am so very glad that I did. If readers are like me and do not care for graphic descriptions of zombies snacking on people, you’ll be glad to know that there are almost none of those in this book. I mean, there are zombies, but they are there as a threat, as a sad part of life (because so many good people ended their lives like that), and not something for the author to describe lovingly, if that makes sense.

This book was such a breath of fresh air for me. It has secondary female characters who are interesting and whom I wanted to get to know better. More importantly, while their lives were connected with the lives of the main characters in some very important ways, you could see or at least infer (if the character had a very tiny role to play even) that they have their own lives, dreams and desires. As for the women who had important roles, they were awesome – being forced to become survivors, they were all heroes in one way or another in my opinion. They were not perfect; these women were very human and believable to me. I also felt that the author had some important things to say about the situation of women in society and she managed to say it without being preachy and without making the main romance between the guys any less important. Truly, the portrayal of women in m/m romances is one of my hot buttons and even if I did not like anything else in this book, I would have still praised this book for this reason. I wish for more books with interesting female characters.

But let’s talk about the romance. I really liked both Cal and Mitch. Of course, due to the setup of the book everybody in this world is forced to become a survivor – it is either fight or be bitten by zombies (or be brutalized or killed by some horrible humans). Both guys’ personalities are shaped by this reality, but I was very impressed with how the writer managed to make past and present collide to create their characters.

Mitch was a cop, and as he said in the book, he never stopped being a cop. How can one not admire a man who wants to protect other people in the best sense of the word. He may forget at times that his trainees are capable enough that at some point they will not need him anymore, but those flaws to me are realistic, and they only make the character more likeable. I could see how Mitch’s wounds of the past influenced the development of his present with Cal, and most importantly, I believed in what was happening.

Cal to me was no less impressive – he may have worried about the things he did in his past, but I was very impressed as to how hard he worked to try to make his present better. That did not come without effort and again, I really believed in the pushbacks that occurred. I sometimes get very annoyed when the characters in romance start to fight if I do not buy the reason of their fight, especially if it leads into the temporary separation of the characters. I completely bought the conflicts in this book: Cal’s past choking him up and not letting him see the reasons, while Mitch was not able to say the right words. I thought it was very well done. I also really liked that the separation that resulted did not last long and that Cal’s better nature took over the moment his friends were in danger.