Recommended Read
Fallen from Grace by Laura Leone is recommended by Brie. I love romance novels in general but I have a soft spot for contemporary romance. You can find me on Twitter (@racblog) and on my blog (http://romance-around-the-corner.blogspot.com/)

I am recommending this book because I recommend this book because the hero is a prostitute, which happens to be my favorite type of hero, closely followed by virgin heroes (I also love everything in between *grins*). If that’s not enough, I should say that the story is touching and has the right amount of angst to make it interesting but not overly dramatic. The heroine has her own demons to battle and the hero knows all about sex but nothing about love. Their relationship is quite tender and symbiotic; they both had something to give and something to take from it. The book isn’t without flaws, but I loved it and it stayed with me long after finishing it. Great Contemporary Romance to spend a very entertaining evening with. 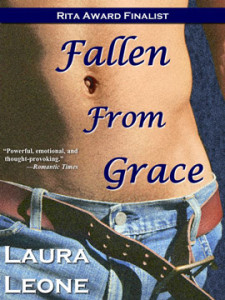 Excerpt from Fallen From Grace by Laura Leone

He stood before her, his stomach churning so badly he was afraid for a moment he’d be sick right in front of her.

Oh, that would be smooth.

The flickering lights of the candles cast subtle shadows across Sara’s face, bringing out those strong cheekbones which he’d often thought made her look a little exotic, as did the colorful clothes she wore, the artsy earrings she liked, and the rich darkness of her eyes.

Those curious, thoughtful, expressive eyes… which were gazing at him right now with such intensity and tender concern.

His heart contracted, just looking at her. He’d learned all too well by now that she could do this to him—make his insides quiver just by meeting his eyes.

“So… you’re not a model?” she said, trying to get the ball rolling now that he had started this conversation. “Okay.”

Say it. Get it over with. Tell her.

She said, “Is that why you told me that your face doesn’t photograph well, that you only model below-the-neck stuff?”

He nodded. “I almost always include that in the story.”

“Because… you need a handy reason,” she said, “that no one ever comes across a photo of you modeling?”

He nodded again. Of course she would figure it out right away. He knew by now how smart she was.

She continued, “You could just say they had come across photos of you, but they didn’t realize it because—”

“Not quite,” she said with a touch of dryness.

Rain continued drumming gently on the roof. Ryan’s gaze shifted to Sara’s mouth. Her lips were a little swollen now, and he realized how hard he must have been kissing her before. She looked so…

God, he wanted to kiss her again.

And once she knew the truth, she’d never let him do it again.

He shouldn’t have done it in the first place. That’s what she’d think, too, once he told her.

Jesus, just tell her, would you?

Her thick, dark hair was a tangled mess now. From the rain. From his hands. From that sudden tumble to the floor he’d inadvertently given her when he realized what was happening and shot out of that chair and her embrace only seconds before he’d have taken off all her clothes and made love to her.

His body was still crying out for her.

“An escort,” she repeated.

His breath came rushing out. “Yes. I’m an escort.”

He’d wanted to slit his own throat when he saw how he’d hurt her tonight. Her tears and humiliation. The wounded look in her eyes before he’d explained himself. He didn’t deserve to live, hurting her like that.

And now he wanted someone to beat him up for the way he’d been unwittingly hurting her before this. She’d thought he didn’t want her? That she didn’t attract him? Christ, he’d been pacing his cage for weeks because of her!

He’d been going so crazy lately, unable to give her up and unable to try to claim her, it had turned him into an idiot. How could he, of all people, not have realized that she needed to know he found her desirable?

Maybe I was a little preoccupied with lying to her.

Or maybe he’d just been trying to avoid this moment as long as he could. He knew that once the lid was lifted on his desire, he couldn’t continue hiding the truth from her. That was the line he’d drawn for himself somewhere along the way: He wouldn’t touch her without her knowing exactly what he was. And since he didn’t want to tell her…

“An escort.” Sara shrugged, a slight frown on her face. “Like… a PR escort?”

“A public relations, um, escort. You know.” When he just stared at her blankly, his blood pounding through his throbbing head, she elaborated, “When a writer gets sent on tour to promote a book, for example… Are you saying that you’re the person who would take her around to her interviews and autographings while she’s here in San Francisco?”

Shit. She didn’t understand what he meant.

She sat with her hands folded, looking patient, intent, and encouraging.

“I spend time with people.”

“You spend time with people?”

“You spend time with women.” She still didn’t understand.

She looked stunned, confused, a little upset. “You mean you… Women pay you to have sex with them?”

“Actually,” he mumbled, “they pay Catherine.”

“She’s, um… I guess you could say she’s my boss.” He shrugged. “Whenever my cell phone rings, it’s her.”

“To schedule me for an appointment.”

“An appointment.” Her voice was faint. “To… have sex? With other women?”

“Sometimes. Sometimes, I just spend time with them.”

“Yes,” he said, lowering his gaze.

“And you get paid for this.”

“I do.” He wished this conversation could be finished now.

“Are you telling me…” Sara sounded as if she was sure she must be mistaken when she said, “Ryan, that sounds like prostitution.”

“Oh, no,” he said ironically. “It’s only prostitution if you get paid for sex. If you just get paid for your time…” He met her eyes, wincing at the dawning shock he now saw there. “Well, then it’s all strictly legal.”

“You just… get paid for your time?”

“It doesn’t matter what I want. It’s whatever the client wants.”

“But… if you don’t want sex, and you do it because someone’s paying you… Then, well, they are paying you to have sex, and that is prostitution.”

“Yeah.” She understood it now, all right. He could hear it in her voice, see it in her expression. “It is.”

“Yes. I’m a prostitute.” And he was discovering that telling her made him feel even worse than he had anticipated. For no particular reason, he added, “A very expensive one.”

“Oh, yeah.” He sank onto the couch and rubbed his brow. “I’m a pricey item. Top drawer. A first-class fuck.”

“I usually say ‘escort,’ because that’s what Catherine taught me to say.” He had to be candid with her, no matter what it cost him. “But it’s just a nice way of saying that I’m a high-priced whore.”

“I work for an exclusive agency. You couldn’t even afford the  so-called membership fee that most people have to pay just to see my photos, never mind meet me.” If anything ever happened between the two of them after this, he didn’t want it to be because he’d glossed over the facts. “It costs a client a lot of money to have sex with me, and even more to spend the night with me. It’s not so cheap for someone to have me on her arm at dinner or a party, either.”

“You wanted to know what happened to me today?” He recalled her questions and how he’d tried to avoid answering them. “I spent most of the day in the lock-up.”

“You were in jail today? You’ve been arrested?”

“For the third time.” His chest hurt as he held her gaze. “I’ve got a rap sheet, Sara.”

“What?” She looked sick from this succession of shocks. “What were you arrested for?”

“Today I got up, walked Macy, bummed a cup of coffee from you, went to the gym…” He made himself tell her. It was wrong to keep hiding this from her. “And then I did a two-hour trick.”

“We’re not supposed to call it that—”

“The escorts who work for Catherine. But I have bad habits. You can take the boy off the streets, but you can never completely wipe the streets off the boy.”

She just stared at him, stunned and distressed.

Now that he had started, he couldn’t seem to stop himself. He felt compelled to strip everything, to be more naked with her than he’d been with anyone in years. “Anyhow, it was a two-hour trick, like I said. Easy work. A massage and sex. We finished early, I got dressed—”

“You had sex with another woman today?”

“Yes.” He held her gaze. “And two days before that, with someone else. And last week—”

“You’ve been…” She squeezed her eyes shut briefly, then said, “You’ve been sleeping with other women. All this time.”

“All those times you said you were working…”

“I was working. Just not the kind of work I told you I did.”

The betrayal in her voice cut into his heart, but he wouldn’t try to escape his punishment. “Yes. I’ve been lying to you. Ever since we met.”

Do you have a recommendation? Please fill out our form here!

Previous article: REVIEW: Ten Tiny Breaths by K. A. Tucker
Next Post: A review of the 2012 publishing predictions