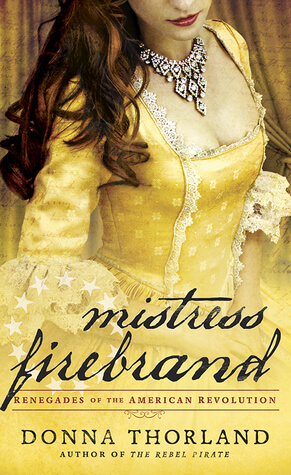 British Occupied Manhattan, 1777. American actress Jennifer Leighton has been packing the John Street Theater with her witty comedies, but she longs to escape the provincial circuit for the glamour of the London stage. When the playwright General John Burgoyne visits the city, fresh from a recent success in the capitol, she seizes the opportunity to court his patronage. But her plan is foiled by British intelligence officer Severin Devere.

Severin’s mission is to keep the pleasure-loving general focused on the war effort…and away from pretty young actresses. But the tables are turned when Severin himself can’t resist Jennifer Leighton…

Months later, Jenny has abandoned her dreams of stage glory and begun writing seditious plays for the Rebels under the pen name “Cornelia,” ridiculing “Gentleman Johnny” Burgoyne and his army—and undermining the crown’s campaign to take Albany. By the time Severin meets up with Jenny once again, she is on a British hanging list, and Severin is ordered to find her—and deliver her to certain death. Soon, the two are launched on a desperate journey through the wilderness, toward a future shaped by the revolution—and their passion for each other…

It used to be that historical romance was my main reading diet but in the past couple of years, my interest in that subgenre has waned and I find few books tempt me away from contemporary romance these days.  I was drawn to Mistress Firebrand by the beautiful cover and by the blurb which promised a story both interesting and unusual, not least because there wasn’t a duke in sight.

when I read disproportionately in a genre, whether it’s romance or something else, the opening pages are familiar enough in style and approach that it’s like a warm blanket.

and even though this book is most definitely a romance, I’ve been reading so much contemporary lately that I have, I think, forgotten some of the “code”.  It did take me a while to settle into the book.  Partly it was reading a historical romance after some time away, partly it was the more literary feel to the style and prose and partly it was the numerous references to classic plays I didn’t have any familiarity with (because I am a Philistine).  While these things were something of a barrier to me, they will be catnip to others.  (If Sunita is reading this, I imagine her finger is already hovering over the buy button.)

Even though it took me a while to get into, there was a lot to like once I became used to the style; Severin and Jenny talk to each other and treat each other as equals – for Jenny, a woman (and worse – an actress!) this is a rare occurrence

If [a] girl had been born into wealth and had no need to sell her work to support herself, she might have been able to write— assuming she had indulgent parents or husband— from a position of relative safety, but men habitually assumed that a woman who sold the products of her mind sold other parts of her person as well. And there were always those waiting to take advantage of that market.

but it is not only Jenny who feels relief and pleasure at such treatment.  Severin is half Mohawk; many women who are attracted to him want him for what they perceive to be the danger and exoticism of his ethnicity and don’t look beyond it.  And his peers generally look down at him – either because of the circumstances of his birth and/or because of his profession – as both spy and “fixer” for the Crown.  Severin is regarded as an “unpleasant necessity” by many of his fellows.  Even when Jenny becomes aware of the nature of his work for the British, she doesn’t shy away from him.  She asks him outright and judges him on his own merits and her own experience of him.  And perhaps it is only she, who sees that he has been forced into a role that does not sit comfortably on his soul and encourages him to take steps to change it.

Possibly because of his upbringing, Severin is uniquely placed to appreciate Jenny and not to wish to fetter her in any way.  He has no desire to own her or force her to his will.  Jenny, heavily influenced by her famous, notorious and gifted actress Aunt, Frances (aka the Divine Fanny), is very much the feminist.  It was interesting to see how Jenny negotiated the tensions of her desire to be a woman of free will, pursue her dreams and chart her own course, versus the confines of her fortunes and the times in which she lived.  I found it believable and authentic as well.  It was clear to me that much research had gone into the book and that you know this period of American history particularly well.   The detail in the book added wonderful colour to the sense of time and place, but did not bore me with minutiae or historical information dump.

There is a fairly long period of separation for the protagonists shortly after the halfway mark of the book but it does not take up a lot of page time. That’s the kind of separation I don’t mind so much.  That said, I did find the sudden shifts forward in time jarring on occasion.

The story of Severin’s birth and childhood is doled out slowly over the course of the book and I did find it confusing at the beginning.  I have not read the other books in the series and at first I wondered if something had been explained in an earlier book.  However, the Author’s Note at the end makes it clear that the only recurring character in the series is Angela Ferrers and that Severin and his history had not been previously mentioned.  I had the feeling, when I was reading, that I was supposed to know who Ashur Rice was and, when I didn’t, I felt a little lost.  This is probably something to do with the way I read and there will no doubt be many others who are more than content to wait for the story to reveal itself.    When I did eventually find out about Severin and Ashur, I was fascinated and wanted to know more.  An encounter, late in the book, was not enough for me. I really wanted to see a conversation between the two men.

I am a big fan of the movie version of The Last of the Mohicans – even though I know it is not true to the book (which I understand is a good thing on a number of levels) and that there are other problems with it.  Nevertheless, the romance lover in me is delighted by the film.  I couldn’t help but picture Daniel Day Lewis (as he was in the movie) in the role of Severin even though Jenny was little like Cora/Madeleine Stowe. Actually, I think Mistress Firebrand would make a great movie.  There was a very cinematic quality to the story for me and I’d love to see it on the big screen. Additionally, I think the episodic nature of parts of the book would better suit a movie.  I am able to interpolate continued relationship off screen better than I am able to do it off page.

There is also something very epic about the love story between Jenny and Severin and, like the movie with Daniel Day Lewis (“I will find you!” *sigh*) and Madeleine Stowe (and let us not forget Eric Schweig!) there is also desperate danger and last minute rescue.  In keeping with the feminist nature of the story, Jenny is not the only one who is rescued – she does her fair share of the rescuing herself.

Even when their safety is assured, Jenny makes it clear she does not want to be a wife of “domestic devotion”:

“And I love you, Severin, but I have seen love up close now, and I will not settle for the kind that limits and diminishes me.

I found the second part of the book, where the “seditious playwright” known as Cornelia is on the hanging list to be the most compelling and I had to keep reading to find out how Jenny was going to save her neck and get her happy ever after.   The very end of the book (and I’m talking the last three pages here), while entirely happy, skipped over important things in the timeline and disappointed me just a little.  And I did find the final “rescue” in the story anticlimactic as a lot of it happened off page.

There was a sex scene in the second half of the book which was uncomfortable for me.  I didn’t think Severin had to go quite so method in his acting and even though it was ultimately clear Jenny was on board with it, I can’t say I was entirely.  This might be a problem for some; I suppose it could be considered dubious consent.  It shocked me and I don’t think I’m the most sensitive of readers.

I’m no expert, but I found the depiction of Native Americans in the story to be nuanced and broad rather than stereotypical.  Also, the narrative was clear that even though George Washington was apparently a nice guy he was still a slave owner and hence, not at all perfect. In fact, there is interesting discussion of loyalties and politics in the book right the way through and they are presented as being complex and imperfect, something I appreciated very much.

Even though I found Mistress Firebrand a little slow to start, I enjoyed the book quite a bit and I’m a total sucker for the rescue trope.  Grade B-.