What Janine is Reading and Watching in Early 2015

The Broken by Shelley Coriell

I picked up this book after seeing that it made Publishers Weekly’s Best Books of the Summer. I hadn’t read Coriell before but I was in the mood for a good romantic suspense, and this book seemed to fit the bill.

Kate, the heroine of the story, was once attacked and nearly murdered by a serial killer who preys on newscasters. Kate quit her job, changed her name and disappeared. When FBI agent Hayden Reed locates her, she is working as an aide to a blind Vietnam veteran. Kate, who believes the killer is her brother, at first resents Hayden’s intrusion into her life and later agrees to help him solve the case. As the two work together, an attraction develops.

I read 30% of this book and then quit, for the following reasons.

First, Smokey, the veteran, was independent which is good, but I didn’t love the way the book used him and his blindness to make us conscious of his vulnerability, and by extension Kate’s vulnerability, since she worried that the killer presented a thread to his safety.

Second, I wasn’t feeling the romance between Hayden and Kate that much. While I appreciated that it was slow to develop I wanted just a little more spark between them to make me care.

Finally, the suspense / serial killer plot, at least in the section I read, well constructed; truly creepy and disturbing. When the body of someone Kate knew was found covered in roses, the freakiness exceeded my comfort level. For another reader, this might be a plus, but I don’t enjoy being truly scared, and this book made me feel too anxious for reading pleasure, so I quit. DNF.

I bought this book after Liz McCausland at Something More mentioned that this was probably her favorite romance of 2014. I liked, but didn’t love it.

Parker Beckett is a staffer for the senate majority leader, and Millie Frank is a lobbyist for labor unions. Millie is recovering from a trauma (she was taken hostage by an unstable man) when they meet at a club and Parker hits on her.

Very quickly, Parker realizes Millie’s appeal to him is too great. She won’t fit neatly into his lifestyle of one night stands and friends with benefits. So when she invites him to spend the night, he turns her down. And keeps turning her down, even after their jobs bring them into contact again.

Plus #1: Barry writes about the Washington, DC milieu with conviction. This setting really comes to life and feels distinct from other cities. The book doesn’t read as though it could take place anywhere else, and how many books can we say that about to the same degree?

Plus #2: I really like the way this author writes sexual tension and attraction, without resorting to the too obvious and overtly telegraphed mental lusting that some other books use. Instead of telling, she shows. For example, here’s Millie’s reaction when they’ve just met, after Parker has gotten her to order a drink at a crowded bar for him:

“Thanks,” he said as they elbowed their way through the crowd. “I would’ve been dehydrated all night if it hadn’t been for you. Now I guess I owe you something. “ He dropped a hand on her lower back to direct her away from the bar.

Millie scuttled out of reach. “I’m glad I could use my powers for good.” She hoped he could feel her disdain rather than her attraction.

Plus #3: There’s a work conflict: Millie wants Parker to care about her cause, organized labor. Parker has to get a budget deal, and that may mean throwing labor unions under the bus. Both characters are vulnerable under their professional exteriors, so I should have loved the book.

So why didn’t I? Well, things would get brought up, and then dropped. Millie saw a psychiatrist, but it seemed all he was good for was telling her to cover her windows with light-proof shades. There were hints that Parker was commitment-shy because of his grandfather’s memory loss, but the connection between these two things was never explained.

But the biggest problem I had was with the development of the romance itself, which felt artificially extended. Parker kept turning Millie down even after it stopped making sense — almost as if he knew it was too early in the page count for a happy ending. This book was frustrating, like a tantalizingly spiced meal that turns out to be less than filling. I turned the pages eagerly, but was left hungry for more at the end. C+.

I was a huge fan of the early books in Patricia Briggs’ Alpha and Omega series, but its most recent entry, Dead Heat, doesn’t rank as high among my favorites as the earlier four. I liked it, I just didn’t love it.

Charles and Anna’s relationship remains romantic, a true partnership in which each can learn from the other and on occasion, save the other. But whereas in the first couple of books I swooned over their smallest interaction, the power of their exchanges and gestures is starting to fade a bit for me.

I’m not sure whether this is because this is the fifth work in the series, and their relationship is more settled now, or because I’ve read and reread both Alpha and Omega, the novella that introduced the characters, and Cry Wolf, the follow-up novel, so many times that this relationship has finally become diluted for me.

Dead Heat finds Charles and Anna in Arizona, first to buy Anna a horse and meet up with an elderly friend of Charles, and later to solve a crime involving a fae who is preying on children. This goal intersects with Anna’s desire for Charles’ child and Charles’ unwillingness to expose any child to the risk that would come with being his.

Anna’s reasons for wanting a child with Charles were articulated especially well in Charles’ thoughts about how she was robbed of choices when Leo and his pack forcibly made her into a werewolf. But despite this, I couldn’t really relate to her drive to reproduce and wasn’t invested in the question of whether Charles would change his mind.

Also, there was a lot of stuff in the book about horses and shopping for a horse, and honestly, that part of the book bored me. Besides this I anticipated a big turn of events:

Maggie’s death – almost from the moment we learned she’d once loved Charles I saw that coming.
I also realized the identity of the ultimate villain from that character’s first appearance.

What did engage me was the pursuit of the villain and the interactions between Anna and Charles, the Cantrip agents and (Yay for her return, since she’s one of my favorite supporting characters in this series), FBI agent Leslie Fisher.

Before I read Dead Heat, I had feared that the children-in-jeopardy aspect of the book might not work for me, but it didn’t bother me at all because it wasn’t handled in a manipulative way. I never felt the danger to the kids was being used to pull my heartstrings, although some of the scenes involving children got me teary.

I also liked a couple of the new witchborn characters who were introduced in this book, relatives of Charles’ friend Joseph, as well as Joseph himself. Despite my gripes, I found it almost impossible to put Dead Heat down. I wish I’d loved it but even with its flaws, I like it enough to give it a B-.

This television series is a comedy and hard to describe. It sort of satirizes the telenovela genre while being a telenovela at the same time. It’s also romantic, and as the image to the right  proclaims, whimsical. The show has a lot of heart and a caring, strong and very likeable main character. Several of the supporting characters are sympathetic too, which charms me because so much television these days focuses on shady people.

The plot centers on a 23 year old Catholic, Latina virgin — Jane, played by Gina Rodriguez who won a Golden Globe for the role — who is artificially inseminated by mistake. Jane has a boyfriend, Michael, whom she loves very much and who does not want the baby. The father of the baby, Rafael, and his wife Petra do want the child, since Rafael had cancer years ago and this is the only viable sperm sample he had or will ever have. Of course there are more plot complications.

I only discovered this show in the past couple of months and I’m several episodes behind—please don’t spoil me! 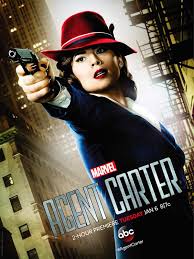 For anyone who enjoyed Captain America, this series, set in late 1940s New York, centers around Peggy Carter (played by Hayley Atwell), the woman who loved Captain America before his disappearance and must now move on without him. It’s at least as good as the movie. Peggy (another likable and strong woman) works as a secret agent, but since this is the 1940s and she is a woman, her boss and coworkers expect her to get coffee for them instead of doing her job.

So when Howard Stark, a man the agency suspects of cooperating with villains, approaches her about clearing his name, Peggy agrees. This gets her into a variety of dangerous adventures and she’s usually two steps ahead of the agents she works with. But will she catch the arch-villain who has killed someone she cares about before her fellow agents discover that she is working with Stark behind their backs? The 1940s setting is a big part of the fun here, too.

As I write this, the show is on the bubble and I’m hoping it gets renewed for a second season because it sure deserves it.